Capitals hold on to early lead to even series against Penguins

Alex Ovechkin scored his seventh goal of the playoffs, Braden Holtby made 32 saves and the Washington Capitals built a lead and this time held on to beat the Pittsburgh Penguins 4-1 in Game 2 on Sunday to even the second-round series.

But after mounting another two-goal lead and this time building on it instead of blowing it, the Washington Capitals made sure it wasn't close enough for one questionable call either way to make a difference. With fresh memories of coughing up that same lead in Game 1, this time they took it to the Pittsburgh Penguins and emerged with a 4-1 victory in Game 2 to tie the second-round series.

"You can see what happen last game when we get the lead 2-0 and they come back and win the game," said Alex Ovechkin, who scored his seventh goal of the playoffs. "They're experienced team, they're not going to give up and they're not gonna give easy play for us. We have to earn it. Today I think we play a solid game, everybody was in and we get the result."

It was a result that came with controversy and a potentially significant aftermath as the two-time defending Stanley Cup champion-Penguins came out on the wrong side of a coach's challenge, the NHL's video review on what would have been their second goal and lost defenceman Brian Dumoulin after a hit to the head by Tom Wilson. 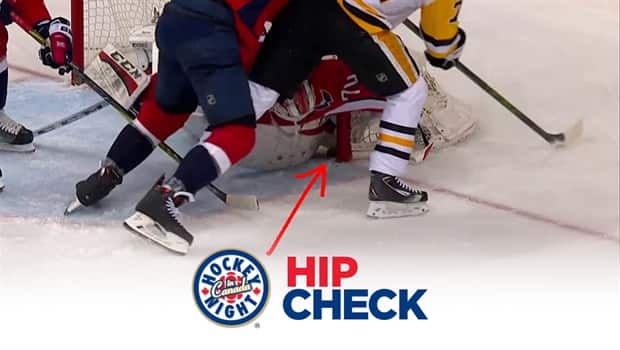 'They were all over us'

Holtby stopped 32 of the 33 shots he faced to frustrate the Penguins, robbing captain Sidney Crosby and linemate Jake Guentzel with sliding pad saves to continue his strong play in the postseason.

The Penguins thought he should've allowed one more goal to Patric Hornqvist in the third period. No definitive replays showing the puck over the goal line and Wilson's hit that injured Dumoulin left them steaming but also kicking themselves for starting slow and falling behind again. 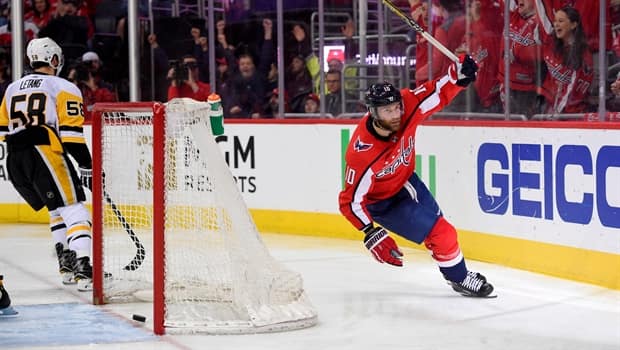 Game Wrap: Capitals get back on even terms with Penguins

3 years agoVideo
2:03
Washington scored the first three goals, and this time they held on for a 4-1 victory, to even their NHL Eastern Conference Second Round playoff series at one game apiece. 2:03

"They won the game in the first period," Hornqvist said. "I don't think we played our best game. ... They were all over us."

After blowing three two-goal leads through the first seven games of the playoffs, Washington at least temporarily solved that problem. Ovechkin beat Matt Murray 1:26 in, Jakub Vrana scored on the power play later in the first period and, unlike Game 1, the Capitals made it 3-0 when Brett Connolly scored on a breakaway early in the second.

"Game 1 it was tough, we played a really good game I think and they just kind of found a way to get some breaks and score some timely goals," Connolly said. "We learned from that this time around."

The Capitals are learning some about Murray, having now scored all five of their goals against him in this series glove side. He made 18 of his 28 saves in the first period and had to in order to keep Washington from turning this into a blowout.

Murray was not the least bit happy when the league ruled Connolly's push on him moments before Vrana's goal was not enough to keep him from being able to make the save.

Pittsburgh had an even bigger reason to be angry when Wilson wasn't penalized for checking Dumoulin in the head with his left shoulder in the second. Dumoulin never returned, could potentially miss Game 3 on Tuesday and Wilson is in danger of being suspended.

"He made contact with his head," Crosby said. "Given his history and things like that, I'm sure the league will take a good look at it."

Wilson watched multiple replays and came away believing there was nothing else he could do on the play because Dumoulin stopped and braced for a hit from Ovechkin at the last second. Penguins coach Mike Sullivan said he had an opinion of the hit but declined to share it.

Wilson was already ready to move on.

"It's a bit of an unfortunate play that he got hurt," he said. "We'll see what happens and we'll keep moving forward here. There's more important things going on. We've got a team in here that's pretty good and confident and we've got to go to Pittsburgh and get a game."