Sidney Crosby has concussion, will miss Game 4 vs. Capitals 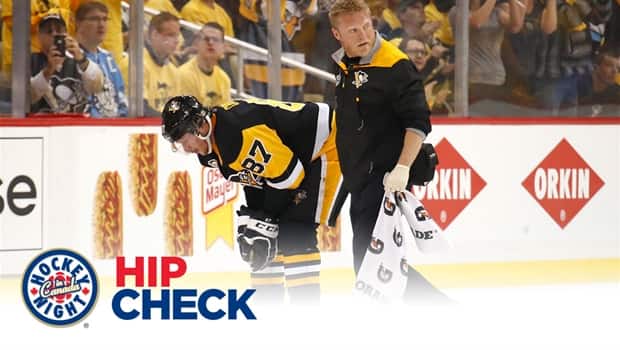 Hip Check: Penguins lose Sidney Crosby in Game 3 after hit to the head

3 years ago
0:38
Sidney Crosby went down hard after taking a cross-check to the head from Capital's Matt Niskanen in the first period of Game 3. 0:38

"He will be out for tomorrow's game," Sullivan told reporters following Tuesday's practice. "We will evaluate him from there."

"My experience of dealing with [concussions] in the past with players is that they are day-to-day things," Sullivan added, "and so we'll rely on our medical staff to advise us in the right way and our guys do a great job in that regard."

Crosby, who missed the first six games of the regular season while recovering from a concussion, left Monday night's Stanley Cup playoff contest in Pittsburgh after taking a cross-check to the head from Capitals defenceman Matt Niskanen. 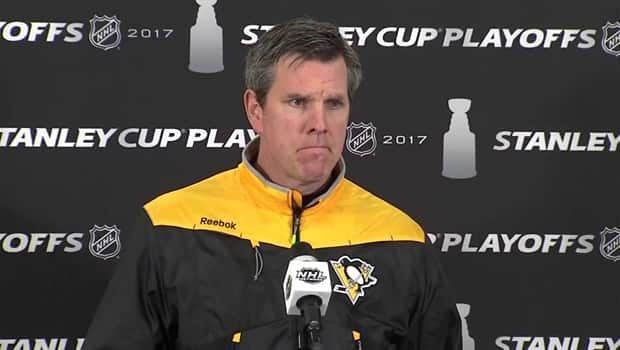 Mike Sullivan on Crosby injury: 'Sid will miss game 4 with a concussion'

Niskanen's stick connected with Crosby's head at 5:24 of the first period in a game Washington won 3-2 in overtime and trails 2-1 in the best-of-seven Eastern Conference semifinal. The Penguins forward had been knocked off balance by an Alex Ovechkin high stick to his upper body.

Niskanen, a former teammate of Crosby, received a five-minute major penalty and game misconduct for his actions but won't be further disciplined by the NHL.

The 29-year-old Cole Harbour, N.S., native has missed 167 NHL regular-season games due to injury, including the first six of this season with a concussion he suffered during a pre-season practice.

Crosby was at Pens practice facility today. Fleury said he "seems good. He was very encouraging towards us."

Sullivan on Crosby's mindset: "He's very upbeat and positive. We're very optimistic and hopeful we'll have him back in a timely fashion."

Losing Crosby for an extended period would greatly affect the Penguins' chances to repeat as Stanley Cup champions. They didn't score after the top centre's departure Monday night until capitalizing on a pair of six-on-five chances in the final two minutes of regulation while going scoreless on four power-play attempts.

Coach Sullivan: "Our team always responds the right way. We've got character guys - people we know we can win with."

"We've been through this all year with injuries," Penguins forward Patric Hornqvist told reporters Tuesday before Crosby's diagnosis was announced. "Obviously if Sid is not playing tomorrow it's a loss for us, but we need other guys to step up and we've been doing that all year."

Pittsburgh forward Conor Sheary also left Monday's game after colliding with Hornqvist at 2:24 of the second period and has been diagnosed with a concussion.

The 24-year-old skated earlier Tuesday morning on his own. Sheary has two assists in eight games this post-season.