Jake Guentzel scored four straight goals to help send the two-time defending Stanley Cup champion Pittsburgh Penguins into the next round with an 8-5 win over the Philadelphia Flyers in Game 6 on Sunday.

Jake Guentzel dropped to his right knee and slid on the ice in celebration, not only for his second career postseason hat trick, but for the goal that assured Pittsburgh was moving on in the playoffs.

He has established his playoff pedigree as a sensational scorer in just two seasons and helped keep a third straight championship in sight for the Penguins.

Guentzel scored four straight goals to help send the two-time defending Stanley Cup champion Pittsburgh Penguins into the next round with an 8-5 win over the Philadelphia Flyers in Game 6 on Sunday.

The Penguins play the winner of the Washington-Columbus series in the Eastern Conference playoffs. Washington leads that series 3-2. 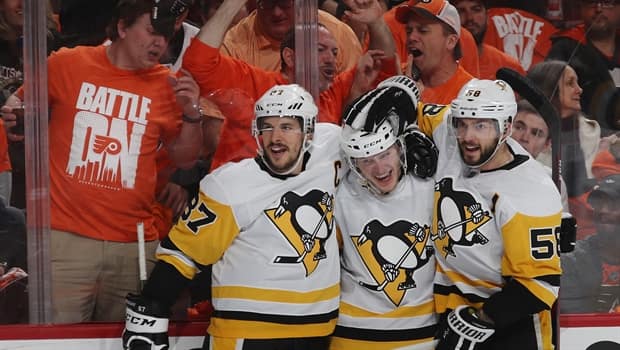 3 years ago
1:26
The 23-year-old forward scored 4 goals in a row to lift Pittsburgh over Philadelphia, and advance to round 2 of the Stanley Cup Playoffs. 1:26

Guentzel scored six goals in the series and added another hat trick to pair with the one he had as a rookie in a first-round series last season against the Blue Jackets.

Guentzel had the third four-goal playoff game in team history, joining Mario Lemieux in 1989 and Kevin Stevens in 1991.

"This is what you want to play in," Guentzel said. "You grow up dreaming about this and this is definitely fun. When the bounces start going your way, you just try and run with it."

Sean Couturier had the 24th playoff hat trick for the Flyers, who haven't won a Stanley Cup since 1975. Couturier said he played with a torn right MCL suffered in a collision with a teammate at practice last week.

"I couldn't move that well, so I just tried to be well-positioned, have good sticks," he said.

Guentzel, not Sidney Crosby, Phil Kessel or the injured Evgeni Malkin, won the game for the Penguins with goals off costly Flyers turnovers, leading them to their ninth straight playoff series win.

He tied the game at 4 with 54 seconds left in the second period off a Flyers turnover. He scored 30 seconds into the third for the lead off another giveaway, and sealed one more lopsided win over the Flyers with two goals 10 seconds apart late in the period.

It was 2-2 after one period, 4-4 after two, and nothing was decided in the fiercest game of the series between the longstanding rivals until Guentzel took control.

The Flyers, who survived a 10-game losing streak just to make the playoffs, lost all three games at home and not even a solid start could help them get out of the first round for the first time since 2012.

Couturier had been the Flyers' postseason saviour, returning from a serious leg injury to score the Game 5 winner and then open Game 6 with his third goal of the series just 2:15 into the game.

The Penguins, who won Games 3 and 4 in Philly, took aim on the road sweep with two straight goals. Crosby, naturally, tied the game when he knocked in a rebound off Kris Letang's point shot for his whopping sixth goal of the series. His goal was still being announced when Carl Hagelin made it 2-1 when he was left all alone in front of the net for the easy goal.

Philly's defence was nonexistent and the Flyers had no bodies on Crosby and especially Hagelin on the gimme goals against Michal Neuvirth.

Andrew MacDonald tied it 2-all on a sizzling shot. The defenceman briefly gave his team the spark needed to go toe-to-toe with the Penguins. Couturier scored his second of the game on a beautiful breakaway to open the second period and Scott Laughton scored on a long wrister and nearly pulled off a Lambeau Leap over the boards in celebration.

More cordial than confrontational — until Game 6

Matt Murray should have stopped the goal — the kind of bad goal usually allowed by the Flyers — and the crowd derisively chanted his name.

Patric Hornqvist scored his second of the series to pull the Penguins to 4-3.

The series had been more cordial than confrontational but both teams cranked up the nastiness levels in Game 6. Penguins forward Carter Rowney cross-checked Travis Konecny and roughed him up on the ice while the officials just watched. Konecny jumped up and — like a wrestling heel smacking his opponent with a steel chair — cracked Sheary in the back with his stick and was whistled for roughing. Flyers coach Dave Hakstol gave the refs an earful while the fans howled as the hits were shown on replay.

But that was about the last crowd-pleasing play by the Flyers. The Flyers failed to take a shot on goal until nearly 12 minutes into the third period and Couturier capped his three-goal game with 2:53 left to play.

Bryan Rust scored an empty-netter with 30 seconds left to ensure the Penguins got all four of their wins by at least three goals.

Hart Trophy candidate Claude Giroux scored only one goal in the series for the Flyers.