Blue-liner shows off his shutdown ability against Russia 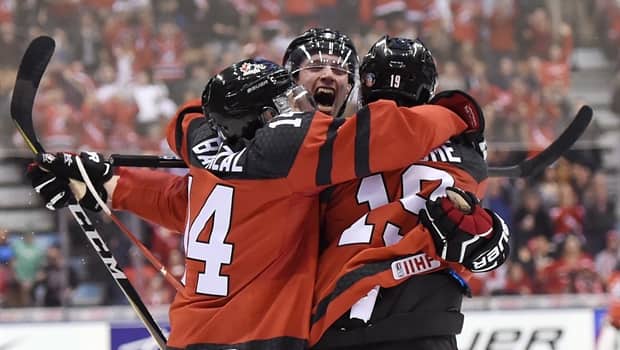 A decade after Bourdon won his second gold medal with the Canadian junior team in 2007, the six-foot-five, 210-pound Myers donned a national team Canadian sweater for the first time.

The undrafted underdog didn't disappoint. He set up Tyson Jost for Canada's first goal at the 3:11 mark in the team's important tournament-opening 5-3 win over Russia at the Air Canada Centre in Toronto on Monday night.

"I started many games in my career, but this was obviously on a bigger stage," said Myers, when asked what it was like to play in his first game for Canada. "You have goose bumps. It was loud. I had a lot of emotions. I couldn't be happier. But you have to stay humble."

Bourdon was humble, too. He also loved to have fun and that's why he was a popular teammate wherever he played, whether in junior for the Moncton Wildcats or professionally for the Manitoba Moose and Vancouver Canucks.

That also is why the hockey world was rocked when he was killed on May 29, 2008, when his motorcycle struck a transport truck at age 21 near his Shippigan, N.B. home.

Myers is from Dieppe, just outside of Moncton. He was nine and didn't remember that Bourdon had been traded in his final year of junior to the Wildcats from the Val-d'Or Foreurs when Moncton played host to the Memorial Cup in 2006. But Myers did know Bourdon's story.

"Unfortunately, he couldn't stay with us much longer. He was a great player and I looked up to him when I was younger."

In Myers' draft year, all 30 teams overlooked him and he went through seven rounds without hearing his named called in 2015. The Calgary Flames invited him to their development camp a month later but chose not to sign him.

The Philadelphia Flyers did not make that mistake after they invited Myers to their training camp in September 2015. They liked his size, his skating and puck-moving ability. As a result, Myers promptly was signed to a three-year, entry-level contract.

"I've always wanted to play in the NHL and kept my mind on that," Myers said.

Learning how to win

After Flyers training camp he returned to his junior team, the Rouyn-Noranda Huskies. He continued to work hard with defensive coach Jason Fortier, now an assistant coach with the Kitchener Rangers of the OHL, and the Huskies won the QMJHL championship, advancing all the way to the Memorial Cup final, only to lose 3-2 in overtime to the London Knights.

He performed so well at his second Flyers training camp this past fall that Myers was the last junior-aged prospect to be returned to his junior team by Philadelphia general manager Ron Hextall.

"I learned how to win last year," Myers said. "We had a lot of chemistry. We were a family. Unless you're on a team like that you don't know how important it is to build a bond."

Myers also learned how to manage his emotions to remain on an even keel, something he will need in his shutdown role with Chabot.

"You welcome something like that with open arms," said Myers, who was told by Canadian junior head coach Dominique Ducharme on Saturday that he and Chabot would be the shutdown pair.

Chabot, an Ottawa Senators prospect who plays for the Saint John Sea Dogs, and Myers have butted heads as opponents in the QMJHL for three seasons. But now they have become fast friends.

"He's a great guy and I'm excited to play with him," Myers said. "We have great chemistry right now, but we have to keep that going.

"It's a great honour to have [the shutdown] challenge. You want to have that honour. We're going to stay humble and keep on our games."