Toronto Maple Leafs star Phil Kessel had a rough day Tuesday. After being ripped by former coach Ron Wilson on a radio show, Kessel later called a reporter "an idiot" during a tense media scrum following the firing of Toronto coach Randy Carlyle. 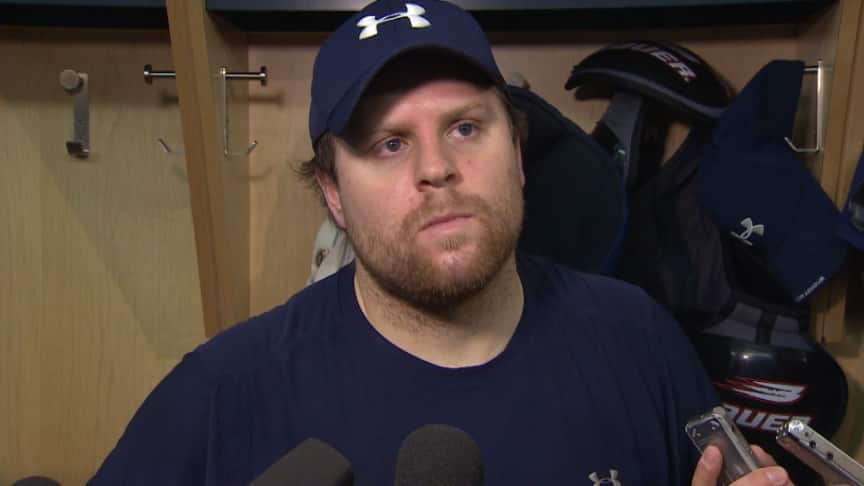 Kessel gets testy with reporter

Toronto Maple Leafs star Phil Kessel was blasted by a former coach Tuesday, and later lost his cool on a reporter.

In an interview with TSN Radio, former Leafs coach Ron Wilson pointed the finger for the team's struggles not on fired bench boss Randy Carlyle but on players like Kessel.

“Some of the core players have failed under two or three coaches so it’s got to be the player’s fault,” said Wilson. “You’d have to surmise that some of them might be uncoachable."

Wilson was especially critical of Kessel, who he said was difficult to coach.

“You can’t rely on Phil,” said Wilson. “Phil’s problem, and I think it’s pretty much how Phil’s been his whole career, is that he is two weeks on and two weeks off."

Wilson also said Kessel's lack of consistency leads the forward to become emotional, and makes it hard for a coach to help him focus.

“When he’s not playing well, he’s a hard guy to get on board and get on your side. It’s just the way it is,"  said Wilson. "He comes and goes and he gets emotional. He lets that affect his game and his relationship with other players. That’s what you have to coach.”​

Wilson was doubtful that the firing of Carlyle on Tuesday would make any difference for the Leafs in the long-run.

“You never change a leopard’s spots. You paint over some of those spots, but they’ll eventually shine through the paint and that’s just too bad," said Wilson.

Wilson coached the Leafs from 2008 to 2012 before Brian Burke replaced him with Carlyle.

During a media scrum hours after the firing of Carlyle, Kessel was asked by reporter Dave Feschuk if he was a difficult player to coach. The Leafs forward responded emotionally to the question, becoming upset with Feschuk.

"I don't think so, that's a weird question for you to ask," said Kessel. "You think it's my fault? Is that what you're saying?"

Kessel left reporters with a final comment about Feschuk.

"This guy's such an idiot here. He's always been like this," said Kessel.

After being called an "idiot" by Kessel, Feschuk went on TSN radio to discuss the exchange.

"I don't make it my business to get in confrontations with athletes," said Feschuk. "I'm just going to ask you what I think's the right thing to ask."

Co-host and former NHL player Jeff O'Neil asked Feschuk what he expected Kessel to say in response to the question.

Feschuk responded by conceding O'Neil made a good point.