The Pittsburgh Penguins became the first team in nearly two decades to capture back-to-back Stanley Cup championships with a 2-0 win over the Nashville Predators in Game 6 on Sunday night. 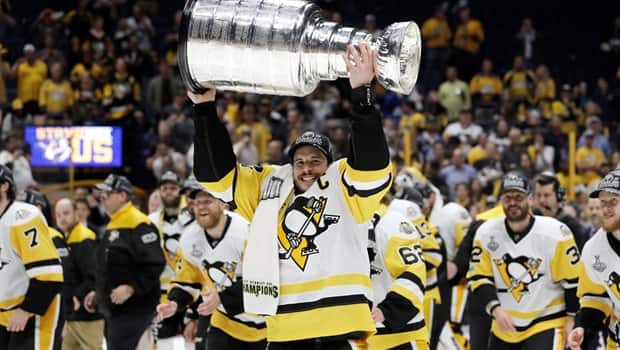 4 years agoVideo
2:38
Patric Hornqvist scored with 1:35 left in regulation as the Penguins defeated the Nashville Predators 2-0 in Game 6 on Sunday night. 2:38

Sidney Crosby is bringing the Stanley Cup back home to Pittsburgh for a second consecutive year. He's bringing another MVP trophy, too.

Patric Hornqvist scored with 1:35 left and Matt Murray made 27 saves for his second straight shutout as the Penguins became the first team in nearly two decades to repeat as champion with a 2-0 win over the Nashville Predators in Game 6 on Sunday night.

The Penguins won their fifth title — all of them clinched on the road — to tie the Wayne Gretzky-Mark Messier-era Edmonton Oilers for sixth on the all-time list. The Detroit Red Wings in 1997 and `98 were the last champion to defend their title. The Penguins are the first to do it in the salary-cap era.

"We knew it was going to be tough all year, but we just tried to keep with it," Crosby said. "We had a lot of injuries and things like that. We just kept finding ways. That was really what we did all season, all playoffs. It's great to be able to do it." 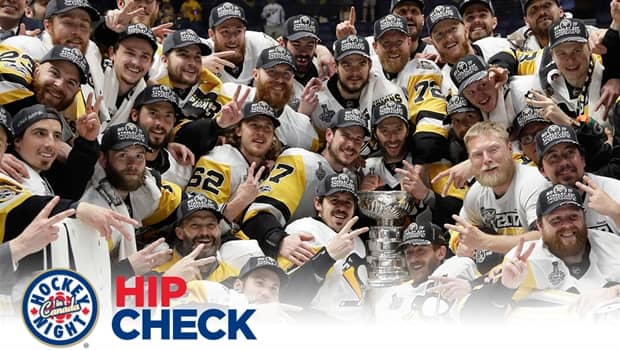 Crosby also became just the third player to win the Conn Smythe Trophy in consecutive years as the Stanley Cup MVP to go along with his third championship. He led the final in scoring with one goal and six assists, including three in a 6-0 win in Game 5 that put the Penguins on the doorstep of another title. Only teammate Evgeni Malkin (28 points) had more than Crosby's 27 this post-season.

"You have a small window to play and have a career," Crosby said. "I feel fortunate, but I also understand how difficult it was so you just want to try to make the best of it."

Hornqvist scored off Nashville goalie Pekka Rinne's left elbow , the former Predator silencing the raucous crowd that had stood for long minutes and flung a few more catfish, too. Nashville challenged for goalie interference, but the goal was upheld. With Pekka Rinne pulled for an extra attacker, Carl Hagelin set off a bench celebration with an empty netter with 13.6 seconds left.

"Obviously, it's going to be the biggest goal I'm ever going to score," Hornqvist said. "That's always going to stand really close to my heart."

All that was left was the celebrating. Crosby took the Cup from NHL Commissioner Gary Bettman before handing the trophy off to veteran defenceman Ron Hainsey who passed it to veteran forward Matt Cullen.

Nashville lost for just the first time in regulation on home ice this post-season and this one had some hard luck. Colton Sissons had a goal erased by a whistle 67 seconds into the second period. The Predators went 0 of 4 with the man advantage, including 32 seconds of a 5-on-3 in the third.

"It stings," said defenceman P.K. Subban, brought over in a trade stunner in the off-season and a foil for Crosby all series. "I think the biggest thing we've got to take from this is, remember the feeling. That's what's going to drive us ... We're going to be back here again next year."

Forget a golden anniversary: The Penguins will cap their 50th season with their names on the most famous silver cup in sports — again. It is also the third championship for Crosby and a handful of teammates from the 2009 title team, surpassing the two won by the Penguins teams led by current owner Mario Lemieux in the 1990s.

And it's the second championship in 18 months for coach Mike Sullivan, who has yet to lose a playoff series since taking over after Mike Johnston was fired. Sullivan is the first American-born coach to win the Cup not once, but twice.

"It's been an amazing year from the start, trying to repeat," Lemieux said. "A lot of these guys played injured in the playoffs and showed a lot of character. Of course, Sid being the best player in the world again and winning the Conn Smythe. He was our leader and picked up the team when we needed it."

Murray became the first goalie to win not one, but two Stanley Cups as a rookie after being a late-season call up a year ago who didn't play enough games to get that tag removed. That's something neither Patrick Roy, Ken Dryden or Cam Ward ever managed, but the 23-year-old Murray finished this Final shutting out Nashville for the final 146:52. He set a rookie record with two shutouts in the Final.

"What an experience," he said. "It doesn't get any better."

The loss ended the upstart Predators' deepest playoff run in their 19-year history and one that became the talk of the town — and the league.

The stingy Predators found Pittsburgh was up to the task, with the Penguins taking the first two games on home ice. Nashville roared back at home to even things up, but the Penguins routed Nashville to set up Game 6.

The Penguins ruined Nashville's big party on the final night of CMA Music Festival, which brought more than 100,000 to downtown Nashville. Country star Luke Bryan serenaded fans from the rooftop of a honky-tonk in a performance that kicked off the television broadcast, and he also sang a four-song set for fans inside and outside the arena an hour before face-off.

Faith Hill became the latest to sing the national anthem with husband, star Tim McGraw, giving her a hug once finished before waving a towel in each hand. At least five catfish hit the ice before the face-off.

Then a series that hadn't featured even a single one-goal game went scoreless through the first 58 minutes. The Predators thought they had the first goal of the game, just like they did in Game 1 in Pittsburgh, only to have referee Kevin Pollock wave it off immediately. He had whistled the play dead when he lost sight of the puck with Murray on the ice between him and the puck.

Murray also stopped Sissons on a breakaway midway through the second and also gloved a shot from Viktor Arvidsson later in the period. The Penguins also killed off 32 seconds of a 5-on-3 at 8:47 of the third after Trevor Daley punched Ryan Ellis with Olli Maatta already in the box for tripping. Murray made a big stop on a shot by Mattias Ekholm followed by a save on Arvidsson.

"We never gave up," Fisher said. "We lost a lot of guys to injuries. Sixteen seed. No one really gave us a chance against anyone and here we are in Game 6. Things didn't go our way, but that happens. That's sport. Like I said, this team never gave up. We believed all the way."

This championship season for the Penguins lacked some of the drama from a year ago, but it was far from a slam dunk. Washington won the President's Trophy for a second straight season and pushed Pittsburgh to seven games in the second round. Ottawa did the same thing, forcing the Penguins to double overtime to clinch the Eastern Conference title.

Crosby, Malkin and others also played in the World Cup of Hockey before the season, making this an even longer year than usual. In the end, the Penguins had more than enough in the tank to bring home another title.

"We've got a collection of guys who understand what it takes to win," Crosby said.