Pekka Rinne made 29 saves and scored an empty-net goal, and the Nashville Predators beat the sloppy Chicago Blackhawks 5-2 on Thursday night for John Hynes' first win with the team.

John Hynes got his first win with Nashville and Colin Blackwell scored his first NHL goal, but the game belonged to Rinne after one historic shot.

Rinne became the 12th goaltender in NHL history to score when he converted an empty-netter with 22 seconds left, punctuating the Predators' 5-2 victory over the sloppy Chicago Blackhawks on Thursday night.

"I obviously understand that it might be a once in a lifetime thing," a smiling Rinne said, "so I really enjoyed it. It was an awesome feeling seeing that puck go in." 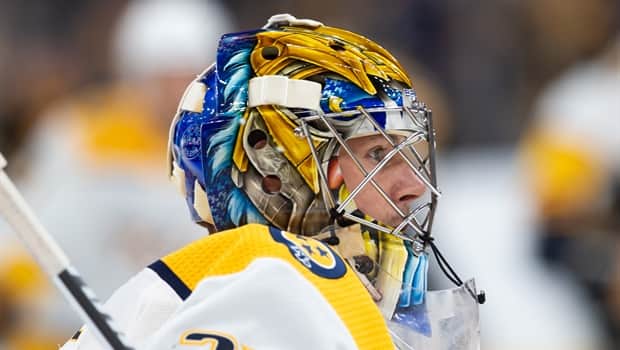 11 months agoVideo
1:00
Pekka Rinne added a first to his historic career on Thursday night as he scored into the empty net to record his first career goal, and the first in the NHL since Mike Smith in 2013. 1:00

Nashville had a 4-2 lead when Rinne fired the puck into the air from behind his own net. It landed inside Chicago's blue line and slid into the goal before Blackhawks forward Kirby Dach could chase it down.

The 37-year-old Rinne said he realized it went in when he saw teammate Nick Bonino celebrating.

"It was pretty cool," said Rinne, who had 29 saves. "I just threw my hands up in the air and tried to act as cool as I can."

Rinne was mobbed by his teammates after the first goal for an NHL goaltender since Mike Smith accomplished the feat for the Coyotes on Oct. 19, 2013, against Detroit. Rinne became the second-oldest goaltender to score in a regular-season game, trailing only Martin Brodeur.

"That was the first time I've ever been a part of a goalie goal, so I think I almost jumped to the top of the building when that happened," Blackwell said. "That was pretty unreal."