Patric Hornqvist scored 2:34 into overtime as the Pittsburgh Penguins captured Game 4 against the Washington Capitals 3-2 on Wednesday night, and now lead the second-round series three games to one.

Letang to return next game 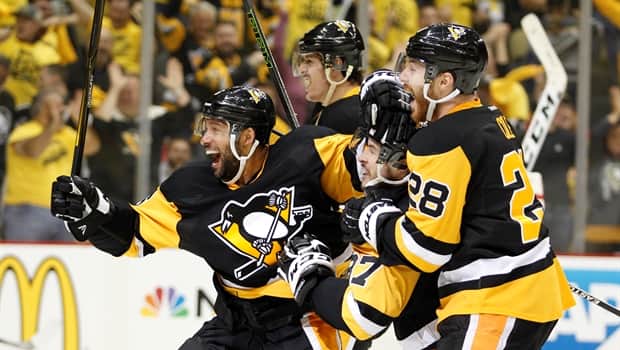 Matt Murray might've been bothered when he was younger by the Jay Beagle shot that beat him less than three minutes into Game 4, a harmless backhand far-side over the left shoulder.

This version of Murray, still only 21 and playing as well as any goalie this spring, has learned to shake off moments like that and move forward.

The Penguins goaltender continued to shine on Wednesday night, turning away 34-of-36 Washington shots in Pittsburgh's 3-2 overtime victory.

Murray is now 6-1 in his first career NHL post-season with a .944 save percentage. He's 13-1 in his last 14 starts dating back to the regular season and is currently outdueling Vezina trophy candidate Braden Holtby.

"I definitely think I feel more and more comfortable and better and better the more that I play," said Murray, moments after Patric Hornqvist's Game 4 overtime winner, which handed the Penguins a 3-1 series lead.

Murray continues to present an unnaturally calm front. On and off the ice he oozes a poise that seems to betray his youth. That's evidently by design. Murray has learned in his brief experience, which included a month-long AHL shutout streak last season, that the best way to handle stressful situations is to stay in the moment and not jump too far ahead.

The electricity of a yellow towel-waving crowd in Pittsburgh did little to shake that calm.

"You've almost got to take a step back sometimes and just relax and take a deep breath and just kind of say 'Here I am. I'm in the moment. Don't worry about all the noise around it and just try to have fun out there'," Murray said. "And that's what I've been trying to do."

It wasn't always that way for Murray, who continues to keep long-time Penguins No. 1 Marc-Andre Fleury on the bench. A Thunder Bay, Ont. native, Murray says he used to get frustrated or tense when he gave up a goal.

"I would get too tense mentally and that turns into being too tense physically and that's when pucks start to go by you I guess," he said. "It's important to just take a step back sometimes and just take a deep breath and just say 'What do you have to lose? Just go out and play and have fun'."

After the early goal to Beagle, Murray composed himself and stood toe to toe with Holtby.

Shortly after Matt Cullen gave the Penguins a 2-1 lead Murray stopped a quality chance by Capitals winger Justin Williams. Williams snatched a Taylor Chorney point shot off the endboards, but not quick enough to beat the former third-round pick in Pittsburgh's goal.

Later there was a turndown of Alex Ovechkin that provoked some chirping from the Capitals captain.

A left pad stop of Evgeny Kuznetsov held the Penguins in front before John Carlson eventually tied the game at two late in the second period.

That was it though against Murray. He stopped all nine Washington shots in the third and two more shots in overtime. He's given up two goals or less in five of seven playoff starts.

Asked before the game why he continues to start the rookie goaltender even with Fleury available to play after a two-month concussion-related absence, Penguins coach Mike Sullivan said the reason was obvious.

"With as well as Matt is playing, common sense would suggest that we should probably stay with him," Sullivan said Wednesday morning.

After Wednesday's win Sullivan said that Pittsburgh would continue to take it one game at a time with respect to its goaltending decisions.

The Penguins won Game 4 despite playing without top defenceman Kris Letang, who was serving a one-game suspension for his hit on Marcus Johansson in Game 3.

Trevor Daley assumed the biggest load in his absence, totalling nearly 29 minutes while also scoring the first Pittsburgh goal. Daley's shot, at about the midway point of the first frame, was blocked initially by Capitals defenceman Karl Alzner before skipping past Holtby.

The Penguins grabbed the lead when the 39-year-old Cullen got a step on Nicklas Backstrom, beating Holtby with a shot through the pads. The two teams held serve in the third after Carlson's game-tying marker late in the second, which saw Washington's leading playoff scorer (10 points) open on the weak-side of the ice.

Carlson whistled the shot high and past the glove of Murray.

Hornqvist's overtime winner, meanwhile, which saw him pounce on a blocked point shot, ensured another positive result for Murray.

"I'm having a blast and I'm looking to keep having fun here as we go," he said.

Daniel Winnik was forced to exit the action midway through the second period after he was drilled along the wall in the Capitals zone by Malkin. He did not return.

The series continues with Game 5 in Washington on Saturday.