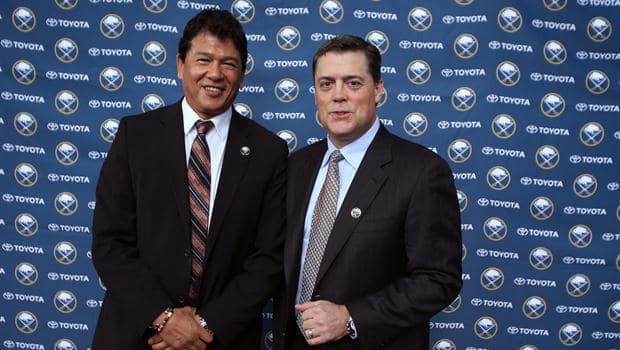 LaFontaine, a commentator on New York Rangers broadcasts with Madison Square Network from 2010 until recently, was named the Sabres’ president of hockey operations.

Nolan, who was named the NHL's coach of the year in 1997 following his only season guiding the Sabres, is back on an interim basis. He went on to coach the New York Islanders and has been the bench boss of the Latvian national team since 2011, a role he'll continue into the 2014 Sochi Olympics in February.

"We'll compete, we'll make it exciting and we'll make it a place people want to come and enjoy hockey games again," Nolan said at a news conference Wednesday morning. He was to conduct his first Sabres workout in 16 years later in the day.

Ron Rolston spent 51 games behind the Buffalo Sabres bench before the team fired him Wednesday. He isn’t alone when it comes to short coaching tenures in the NHL. Eight others have coached fewer games, either on a full-time or interim basis, than Rolston since the 2001-02 season. They are:

The Sabres are 1-8-1 at First Niagara Center this season. They edged Los Angeles 3-2 in a shootout Tuesday night to avoid tying the worst home start in NHL history.

LaFontaine played six of his 15 NHL seasons with Buffalo, scoring 158 goals and 385 points in 268 regular-season games while adding 27 points in 19 playoff contests.

"I'll be actively searching for the next general manager," LaFontaine, who started a job as a senior executive for the NHL last month, told reporters Wednesday.

"My goal is to get the best men out there to help build a championship calibre team."

A series of concussions forced the centre to retire on Aug. 11, 1998 as a member of the Rangers and in 2003 LaFontaine was inducted into the Hockey Hall of Fame.

Considered one of the game's best playmakers and fastest skaters, he broke into the NHL with the New York Islanders in 1983.

LaFontaine set Sabres records for points with 148 and assists with 95 in a career season in 1992-93.

His move into the front office follows contemporaries such as Joe Sakic, who was hired as executive vice-president of hockey operations in Colorado in May, and Tampa Bay general manager Steve Yzerman.

Nolan, meanwhile, spent eight years running his own business in Canada and the United States after Buffalo fired him. An Ojibwa from the Garden River First Nation Reserve in northern Ontario, he has said in the past that he believes racism played a role in his long hiatus from an NHL bench.

Nolan guided the Islanders to the Stanley Cup playoffs in 2007 and posted a 74-68-21 mark with the team in his two seasons.

LaFontaine expressed confidence in Nolan, who has a reputation for motivating and helping develop young players after coaching junior teams in Canada.

"I'd like to say there's nobody I know better who can work in a locker-room and bring a group of players together," LaFontaine said.

Desire to return to bench

He spent the next two seasons as vice-president of hockey operations for the Rochester Americans of the American Hockey League but wanted to return to the bench.

In 2011, he joined a Latvian outfit that saw its world ranking fall to 12th after a 13th-place showing at the world hockey championship that May.

"You've just got to have faith and belief that things will work out," Nolan told The Canadian Press in August 2011. "My perseverance and my patience have been really, really tested.

"I sent out resumes to teams [in North America] to see if there's any coaching vacancies within their organization and received no replies. … It's kind of tough to go through, but maybe I just didn't fit in [in the NHL]."

Rolston, who was named the 16th head coach in Sabres history in May, took over from the fired Lindy Ruff on an interim basis on Feb. 20 and had a 19-26-6 mark in his brief tenure.

On Sept. 24, the NHL fined him for "player selection and team conduct" in the Sabres' pre-season brawl at Toronto. Rolston put six-foot-eight tough guy John Scott on the ice after a fight between the Maple Leafs' Jamie Devane and Buffalo's Corey Tropp.

Known for his teaching abilities and attention to detail, Rolston joined the Sabres in 2011 as coach of the Americans after seven seasons coaching USA Hockey's national team development program.

Regier had been the Sabres GM since 1997.

Sabres owner Terry Pegula stressed that the problems went beyond the performance of Regier, who had become the subject of "Fire Darcy" chants in Buffalo.

"He didn't do what he did by himself," Pegula said. "There was input from many people, prior owners, myself. Why now? I just decided and that's the only answer I can give you. We work together and sometimes you get to the point where a change was needed."