Phil Kessel's goal at 13:05 of the third period broke up a goaltending duel between Ottawa's Craig Anderson and Pittsburgh's Marc-Andre Fleury, and gave the Penguins a 1-0 win that evened the Eastern Conference final at one game apiece.

Pittsburgh winger scores with 6:55 remaining to break up goaltending duel 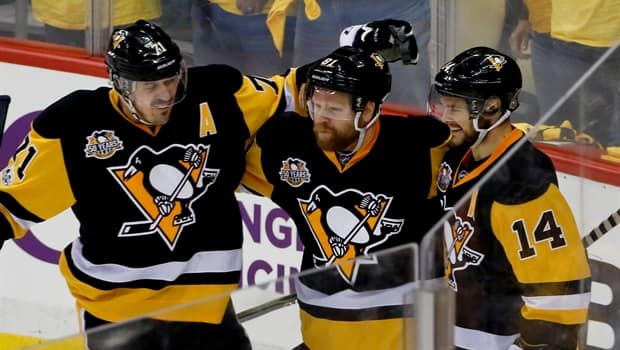 There was a much more simple, much more aggravating reason Anderson got beat for the only goal Monday night in the Ottawa Senators' 1-0 loss in Game 2 of the Eastern Conference final at PPG Paints Arena.

"I caught an edge [with a skate in the ice]. Simple as that," Anderson said. "Caught an edge. It sucks. A defenceman or forward catches an edge, he falls down, nothing happens. I catch an edge, it's in the net. It sucks."

The loss leaves the series tied 1-1 heading to Ottawa for the next two games. Game 3 is Wednesday.

Kessel's goal came at 13:05 of the third period to break up a goaltending duel between Anderson and Pittsburgh's Marc-Andre Fleury. Fleury made 23 saves to earn his second shutout of playoffs, and second in three games, as well as the 10th of his career in the post-season. Anderson also was strong, stopping 28 of 29 Pittsburgh shots.

Do you Phil the thrill? <a href="https://t.co/8bDkTmNNxm">pic.twitter.com/8bDkTmNNxm</a>

Kessel scored on his own rebound from the slot after his initial shot was blocked by Jean-Gabriel Pageau.

"It was a fortunate bounce, right?" Kessel said. "[The first shot] got blocked and I just tried to get it off quick, and it went in."

Kessel breaks out of slump

Kessel had gone three games with no points and had just one point, a goal, in his previous five games.

From late in the second period until after Kessel scored, the Senators went 18:53 without a shot, before Fleury stopped one by Zack Smith, as Pittsburgh came alive.

"They did a good job keeping us in our zone," Ottawa defenceman and captain Erik Karlsson said. "We couldn't really get the puck out with control. They made it tough on us."

Until that surge — even until Kessel scored — it was anyone's game.

"They were surging. They were aggressive. We didn't manage it as well."

Pittsburgh, already playing without winger Patric Hornqvist after he left warmups early, was undermanned most of the game after it lost two players to injuries in the first period.

Top-line winger Bryan Rust left after he took a big hit from Senators defenceman Dion Phaneuf and fell backward hard onto the ice. 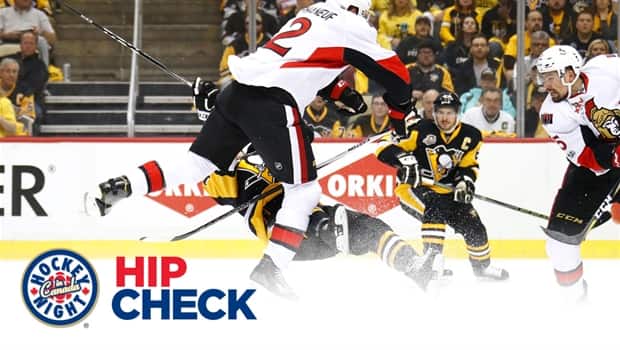 3 years ago
0:25
Pittsburgh Penguins' Bryan Rust was forced out of Game 2 early after a huge open ice hit by Ottawa Senators' Dion Phaneuf in the first period. 0:25

"I just stepped up," Phaneuf said. "You try to do whatever you can for your team to swing momentum, so when there's a chance to make a hit, it's something that I've taken pride in with the style that I've played. So if it's there, I'm going to step up."

A little later, defenceman Justin Schultz appeared to hurt his right arm or shoulder going into the end boards behind the Penguins net.

Neither play resulted in a penalty. There was no immediate update on the injured players.

The Penguins made shooting more of a priority coming into Game 2. They didn't get to that early on, trailing in shots 10-8 after the first.

Pittsburgh picked things up over the course of the second period and led in shots 20-16 going into the third, but to no avail, thanks to Anderson.

"We were right there," Anderson said. "Zero-zero hockey game. It was one of those defensive battles where you just didn't know what bounce was going to be the difference."