Thousands of fans in Edmonton stepped in to belt out The Star-Spangled Banner after anthem singer Brett Kissel appeared to encounter technical difficulties ahead of the Oilers' playoff game against Anaheim.

Crowd covers for anthem singer ahead of Edmonton-Anaheim playoff game 4 years ago
1:33
Oilers fans weren't fazed by technical issues prior to Sunday's game against Anaheim. 1:33

Who would have guessed that Canadian hockey fans would sing the most beautiful rendition of The Star-Spangled Banner? 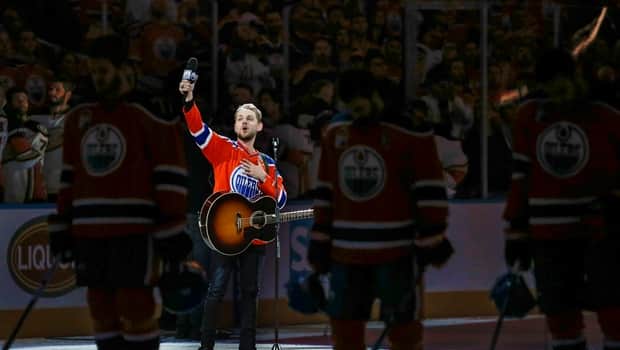 Brett Kissel on Oilers fans saving anthem: 'It was a magical moment'

That's what happened in Edmonton on Sunday night at Rogers Place, before the Oilers' Western Conference semifinal game against the Anaheim Ducks. The fans stepped in to help out country star Brett Kissel after it appeared his microphone failed during the U.S. national anthem.

Kissel, who was born in Flat Lake, was grateful as the sellout crowd of 18,347 showed him some Alberta love.

Anaheim went on to win 6-3, but Edmonton still has a 2-1 edge in games in the best-of-seven series.