If you think Oilers GM Peter Chiarelli pushed the panic button in firing head coach Todd McLellan, you’re right. After all, hasn't Edmonton changed the look behind the bench enough with eight such moves in 11 seasons?

Teams scrambling as 4 head coaches are axed before U.S. Thanksgiving

Peter Chiarelli either made a brilliant move in bringing in Sherwood Park's own Ken Hitchcock as Edmonton Oilers head coach to save their season or a futile one that will cost the general manager his job in the spring.

The Oilers won their first game under Hitchcock, a 4-3 decision in overtime against the hometown San Jose Sharks on Tuesday night, just hours after Chiarelli fired bench boss Todd McLellan. The victory has Edmonton sitting one point back of the winless-in-six Vancouver Canucks for the final playoff spot in the Pacific Division with two games in hand.

If you think Chiarelli pushed the panic button in making his move, you're right. After all, haven't the Oilers changed the coaching position enough with this being their eight such moves in 11 seasons?

Watch the Oilers upend the Sharks: 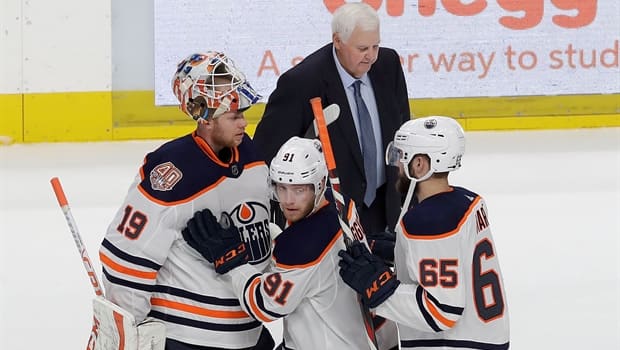 2 years agoVideo
2:09
Edmonton edges San Jose 4-3 in overtime, Connor McDavid and Leon Draisaitl 3 points each. 2:09
With U.S. Thanksgiving fast approaching, which coincides with the first-quarter mark of the season, difficult decisions for NHL teams are contemplated and made at this time of the year.

The Oilers, who had dropped six of their previous seven games before Tuesday, were the fourth team this fall to fire their coach, following St. Louis (Mike Yeo), Chicago (Joel Quenneville) and Los Angeles (John Stevens). But coaching changes this early in the season shouldn't be a surprise.

More startling is the fact no team made an in-season head-coaching change last season.

However, the Calgary Flames, Carolina Hurricanes, Dallas Stars, New York Islanders, New York Rangers and Washington Capitals made moves behind the bench in the off-season.

Time for a turnaround

Not all coaching changes are effective. If a GM or ownership group wants to make a coaching change, often the opening 20 games can work with ample time for a turnaround.

Take last year — without any coaching changes. Of the 16 teams in playoff position at U.S. Thanksgiving, 11 kept their spot to advance to the Stanley Cup tournament in April.

In the East, the Boston Bruins and Philadelphia Flyers were one and four points, respectively, out of the playoffs at this time last year. But, in the end, they were able to rally and displace the Detroit Red Wings and Islanders.

In the West, the Colorado Avalanche, Minnesota Wild and Anaheim Ducks were in a logjam, tied for the final playoff position, but didn't have the tiebreaker. They made the playoffs, however, beating out the teams they were tied with at U.S. Thanksgiving in the Calgary, St. Louis and Vancouver.

It was a given the off-season additions of Erik Karlsson and John Tavares would improve the San Jose Sharks and Toronto Maple Leafs, respectively. While Karlsson has yet to find his form, Tavares has produced and found a prolific early season partnership with Mitch Marner.

But not to be overlooked has been the play of newcomers Jeff Skinner with the Buffalo Sabres, Mike Hoffman of the Florida Panthers, Max Domi with the Montreal Canadiens and Ryan O'Reilly in St. Louis.

The 27-year-old O'Reilly never has scored more than 28 goals in his first nine seasons, but he's on pace for 40-plus this year.

O'Reilly's absence in Buffalo allowed the Sabres to land Jeff Skinner. His 14 goals in 21 games have him among the league leaders and on his way to surpassing the career-high 37 goals he scored in Carolina two years ago. His offence has helped the Sabres win six games in a row.

Domi has a 10-game points streak (five goals, 14 points) going and already has scored 10 times this fall, one better than his goal totals in each of the previous two seasons.

Hoffman is riding a franchise-record 16-game points streak (nine goals, 19 points) and scored a goal in his return to his old team, the Ottawa Senators, on Monday.

The Flames and Stars are in playoff position in the West as are the Rangers and Capitals in the East. Trotz has the Islanders only a point out of the playoff spot in the Metropolitan Division and the Hurricanes are a point behind the Islanders.

The Jets and Maple Leafs, the only two Canadian-based NHL teams to make the 2017-18 playoffs, were expected to perform as well as they have so far this season. But the Flames, Canadiens, Canucks and Senators have exceeded expectations in the first quarter. The Oilers are about right where I thought they would be.

The Flames have benefited from the arrival of new coach Peters, and three players who joined him from the Hurricanes, Elias Lindholm, Noah Hanifin and Derek Ryan.

The Habs currently are in a playoff position. They have done it with a relentless forecheck and speed, and without a return to form from goalie Carey Price. He ranks 44th in save percentage at .900. If Price gets going and his teammates keep up their diligent play, maybe they sneak into the playoffs.

The Canucks and Senators unlikely will be in the post-season. Most felt they would be battling it out for the basement. Who thought they would be challenging for a playoff spot?

Both teams have struggled lately. The Canucks have lost five in a row. But they're still fun to watch with super rookie Elias Pettersson and his 12 goals in 17 games. Ditto for the Senators, who have lost eight of their last 12, but have exciting young defenceman Thomas Chabot. The 21-year-old from Saint-Marie, Que. has five goals and 24 points, double the production of Karlsson's goal and 12 points in San Jose.

The first-quarter has allowed several Stanley Cup contenders to skate into the forefront, like the Maple Leafs, Jets, Sharks, Columbus Blue Jackets, Tampa Bay Lightning and Nashville Predators. But, if you had to choose, which two teams that have stood out and look to be Stanley Cup-Final bound?

How about the Predators and Lightning? The two teams just happened to clash in Music City on Monday with the home team defeating the Andrei Vasilevskiy-less Lightning 3-2. Tampa Bay's prized goalie is out with a broken foot.

The Predators and Lightning are playoff-hardened teams. The Predators went to the final in 2017. The Lightning was there in 2015 as well as two trips to the East final in 2016 and again last spring. If these two clubs stay healthy, I like a Nashville-Tampa Bay final in June, judging from what both teams have exhibited in the first quarter.