Corey Perry scored 6:57 into the second overtime as the Anaheim Ducks completed an improbable comeback to defeat the Edmonton Oilers 4-3 in Game 5 of their second-round playoff series on Friday night. 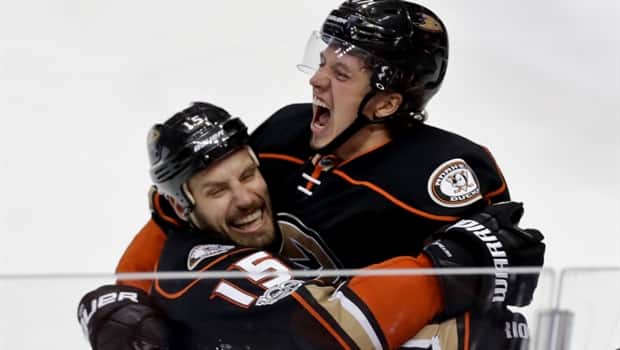 The goal scored in the second overtime was basically an afterthought in the vanquished Edmonton Oilers' dressing room. The Oilers could barely come to grips with the goals that had put them in the unthinkable position of having played extra hockey in the first place.

Corey Perry scored 6:57 into the second overtime as the Anaheim Ducks completed an improbable comeback to defeat the Edmonton Oilers 4-3 in Game 5 of their second-round playoff series on Friday night.

Rickard Rakell, Cam Fowler and Ryan Getzlaf scored for Anaheim in the final 3:16 of regulation to erase Edmonton's 3-0 lead and send the game to an extra period. John Gibson made 35 saves for the Ducks, who became the only team in NHL history to win a playoff game in overtime after trailing by three or more goals with less than four minutes to play.

The Ducks now lead the series 3-2.

Game 6 is Sunday in Edmonton.

Perry took a crisp pass from Getzlaf, faked a shot to get Cam Talbot off balance and put it around the goalie's left skate. The Ducks barreled onto the ice to dog pile Perry, while the Oilers trudged back to again try to process what had happened.

There were only two emotions left for the Oilers.

Talbot supplied the frustration at how a three-goal lead disappeared seemingly in an instant, while Milan Lucic supplied the anger at how that third and final goal was adjudicated.

What neither Talbot nor Lucic could express was the shock that engulfed everyone at Honda Center.

The sold-out crowd of 17,358 was emptying out when Getzlaf finally scored, only for Fowler to come up with a second goal 35 seconds later.

The tying goal perfectly captured the madness of the moment, with Fowler throwing the puck on net from the blue line where it ended up among a mass of bodies, including two Ducks, two Oilers and a sprawling Talbot. Somehow the puck came loose after two attempts by Perry and ended up at Rakell's feet, and he fired a backhand shot that got through all that traffic with 15 seconds left.

Lucic railed at the call, his voice becoming more and more agitated at an uncalled instance of goaltender interference, at least in the estimation of everyone in Oilers' orange.

"Guy falls on the goalie and wraps his hand around the goalie's pad," Lucic said. "I don't even know what goalie interference is any more, to be perfectly honest. Someone please, someone knows. Call me and tell me because it's a shame that we are where we are right now with a call like that."

Talbot described how he was unable to get back up after trying to handle Fowler's initial wild shot, but was a bit more diplomatic in his overall assessment of the shocking loss, pointing to the first goal that initially looked to be nothing more than window dressing.

"They get a lucky bounce there and it just started to unravel from there," said Talbot, who made 60 saves. "We did a good job battling back in overtime, got a few good chances, but weren't on top of things."

Both the ending in regulation and in overtime did not seem possible given the Oilers' mastery of the middle 20 minutes of regulation.

Connor McDavid had a power-play goal and Drake Caggiula and Draisaitl also scored during a three-goal eruption in the second period for the Oilers.

Draisaitl scored just 15 seconds in. McDavid then capitalized on a two-man advantage to put the Oilers up 2-0, swatting a rebound between nemesis Ryan Kesler's legs into an open net. It was McDavid's third consecutive game with a goal.

McDavid picked up an assist on Caggiula's goal, finally notching his first multi-point performance of the playoffs after posting 30 during the regular season to claim the Art Ross Trophy as top scorer in the league. The Oilers were able to spring a 4-on-2 break but only needed a give-and-go between Caggiula and McDavid to break the game open.

The Oilers were lucky to get out of the first without giving up a goal, especially as absences on defence piled up. Oscar Klefbom missed roughly half of the period after taking a puck to the chest, while Matt Benning briefly exited the game after being cleanly checked into the boards by Nate Thompson. Andrej Sekera was shaken up on a seemingly routine check from Getzlaf with an apparent left leg injury.

Sekera did not return, leaving the Oilers with only four defencemen for part of the second when Kris Russell was also shaken up.

"Extremely gutsy," Talbot said of their performance. "Any time you lose a guy like Reggie [Sekera] in the first period, he plays 24, 25 minutes a night, other guys got to pick it up and those guys did an unbelievable job tonight."