Jack Eichel, Johnny Gaudreau, Jonathan Drouin and Nathan MacKinnon scored, Matt Murray made 24 saves and Team North America skated circles around Finland on the way to a 4-1 victory Sunday night at the World Cup of Hockey.

Under-23 squad set to play Russia on Monday night 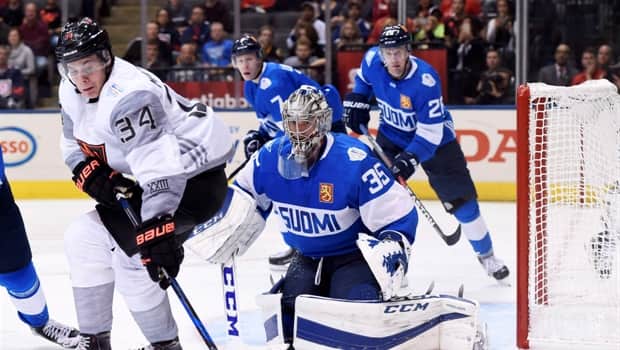 4 years ago
0:54
Jack Eichel, Johnny Gaudreau, Jonathan Drouin and Nathan MacKinnon scored, Matt Murray made 24 saves and Team North America skated circles around Finland on the way to a 4-1 victory Sunday night at the World Cup of Hockey. 0:54

The fastest team made a fast, strong first impression at the World Cup of Hockey.

With blazing speed and uncontainable skill, Team North America skated circles around Finland on the way to a 4-1 victory Sunday night at the World Cup of Hockey.

Led by goals from Jack Eichel, Johnny Gaudreau, Jonathan Drouin and Nathan MacKinnon, the group of 23-and-under Americans and Canadians toyed with a proud Finnish national team that has the most Olympic medals since NHL players began participating.

North America doesn't just belong in the elite tournament full of almost 200 of the best players in the world; it might be one of the most skilled from top to bottom. Four of the past five No. 1 picks were at their best Saturday night offensively and defensively.

Playing his first of what should be many games at his new home arena with the Toronto Maple Leafs, No. 1 pick Auston Matthews had an assist and showed he was ready to face NHL competition.

"I thought he was going to have a hell of a game and he did," coach Todd McLellan said. "There was no fear of playing."

Captain Connor McDavid, the 2015 No. 1 pick of the Edmonton Oilers, also had an assist and several nifty moves that confounded Finnish defenders.

Much like Team Europe, a collection of players from eight European countries, North America made a great first impression after plenty of criticism about being a gimmick. North America's blazing fast play in exhibition games made it the most intriguing part of the World Cup, and that fascination is only stronger now that it showed it can thrive when it counts.

Just because we're younger doesn't mean that we're not as good or something like that," McDavid said. "It's just we have a little bit less experience."

Stanley Cup-winning goaltender Matt Murray made 24 saves but mostly had an easy night as North America outshot Finland 43-25, including an 18-6 domination in the second period.

"The second period was a cold shower for us," Finland coach Lauri Marjamaki said. "They got better, they won every battle, they skate hard, they are so impressive. ... Such a great team."

Pekka Rinne made 39 saves for Finland, struggling at times but also keeping it from turning into even more of a blowout.

Goals came in every possible way: Eichel's greasy rebound at the side of the net, Gaudreau's jumping, spinning deflection, Drouin's toe drag, and MacKinnon's backhand-forehand move after beating everyone else to the puck. North America's apt goal song, "Opposite of Adults" blared on the Air Canada Centre speakers all night.

"I think all four lines really brought something tonight and everybody was out there kind of doing their part," Matthews said. "We were utilizing our strengths, and I think we put them on their heels."

Sometimes the pace was so quick that Gaudreau said players stood up on the bench in anticipation of the next fancy move. North America owned the puck against Finland, which had nine players back from the bronze-medal team in the 2014 Sochi Olympics.

"They really took it to us and showed their individual skill, but also as a team, they were extremely dangerous," Rinne said. "I'm not going to take anything away from them, but we weren't ready to go. We made too many mistakes. We weren't skating. That was the result."

Valtteri Filppula scored the only goal for Finland, late in the third period after the result was decided. That lapse was something McLellan said is a good teaching moment for his team that will help as the World Cup goes on.

Russia is up next Monday night after a 2-1 loss to Sweden earlier Sunday. Despite Russia losing and North America winning, McDavid doesn't see his team as the favorite in the game.

"Russia's a hockey giant and they're one of the best hockey nations in the world," McDavid said. "It's going to be a good test for us."