The Winnipeg Jets began this season in scramble mode. Dustin Byfuglien not reporting to training camp with two years remaining on a multi-million-dollar contract was the kickoff to Winnipeg's dramatic season.

The Winnipeg Jets began this season in scramble mode.

Dustin Byfuglien not reporting to training camp with two years remaining on a multi-million-dollar contract was the kickoff to Winnipeg's dramatic season.

The hulking defenceman's contract on the books until its mutual termination in April hampered Winnipeg's financial ability to shore up the blue-line in his absence.

Losing centre Bryan Little — another original Jets 2.0 player — to injury for all but seven games was another significant gap in the lineup. 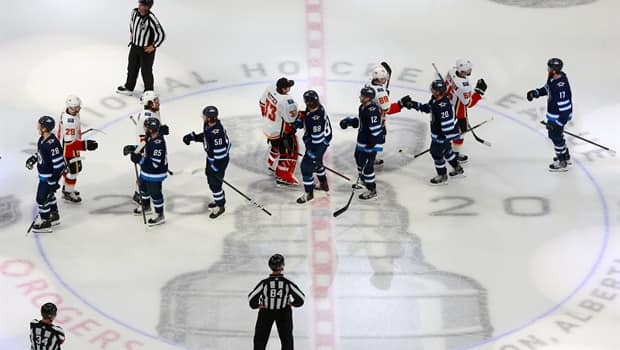 2 months ago
1:08
Dillon Dube scored the winning goal, while Cam Talbot made 31 saves as Calgary shut out Winnipeg 4-0 to bounce the Jets from the Stanley Cup qualifier. 1:08

Top-line centre Mark Scheifele going down with a leg injury three shifts into the Jets' first game of the post-season was a mortal wound to their Stanley Cup aspirations.

That was on top of a season interrupted for four months because of the COVID-19 pandemic. It restarted with unprecedented hub-city tournaments in Toronto and Edmonton.

Scheifele, winger Patrik Laine (wrist) and forward Mason Appleton (shoulder) were all injured in Game 1 of a best-of-five qualifying series against the Calgary Flames in Edmonton.

Winnipeg bowed out in four games.

A 37-28-6 record, a third straight trip to the post-season and Vezina Trophy nomination for goaltender Connor Hellebuyck were the triumphs of a luckless team in 2019-20.

"There were so many events that were unexpected, and could have been catastrophic in a lot of ways, but the players didn't let that happen," Winnipeg head coach Paul Maurice said Thursday on a video conference call with media.

"I'm going to look at this as a year of great resilience by that group."

Winnipeg had lost quality defenceman Jacob Trouba, Tyler Myers and Ben Chiarot to free agency in 2019, and planned to rely heavily on Byfuglien.

A dominating presence who can, as GM Kevin Cheveldayoff put it, "pull two players out of a scrum, one in each hand" ultimately walked away from the final two years of his contract after months of tension with the team. 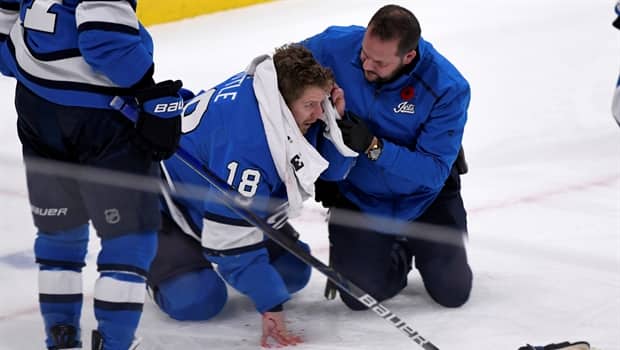 Little's season-ending perforated ear drum from a teammate's slapshot happened while the Jets were still trying to get their defensive house in order.

Winnipeg averaged just under three goals-against per game the first three months of the season before tightening up to 2.65 after Jan. 1.

"We got dusted back from the plate by a couple of curve balls that we didn't anticipate, but I thought we came off the mat and found a way to be competitive," Cheveldayoff said.

Hellebuyck started earning his Vezina nomination in late November with .955 save percentage in a 4-0 run.

"What Connor did was he gave our team a chance to get thrown in the lake with a stone and then get your head back up above water and buy you time to get the stone off and start swimming," Maurice said.

Scheifele initially feared a torn Achilles' tendon, but that isn't the case. The centre expects to be ready for next season, whenever it starts.

Maurice believes the Jets' play five-on-five in front their own and the opposition's net needs improvement.

The blue-line remains a project for Cheveldayoff heading into 2020-21.

The latter was acquired at the trade deadline. Backup goalie Laurent Brossoit is also a UFA.

"I like our group and I think there's opportunities to add around it."

Winnipeg needs a replacement for assistant coach Todd Woodcroft, who took a job with the University of Vermont men's hockey team in April.

"Potentially, we were kind of number 12," Cheveldayoff said. "Getting into the top-10 class, there's some really good talented players I think that are going to be there for us."