Flames' furious flurry comes too little, too late in another loss to Avalanche

Andre Burakovsky stayed red-hot with another two goals on Tuesday night, leading the Colorado Avalanche to a 3-2 victory over the slumping Calgary Flames.

Andre Burakovsky got promoted to the top line on Tuesday night and took full advantage.

Playing with Nathan MacKinnon and Joonas Donskoi, Burakovsky scored twice to lead the Colorado Avalanche to a 3-2 victory over the slumping Calgary Flames, who are winless in their last five.

"Sometimes that just happens. Every shot you have goes in somehow," said the 24-year-old left-winger, who has 10 goals on the season, five coming in the last three games. "I've been playing with great players and they're giving me a lot of looks."

The opening at left wing on the top unit was the result of the head injury suffered last game by Matt Calvert, who has been placed on injured reserve.

"[MacKinnon] can do so much with the puck. Normally a guy could need a little bit of support, but he's kind of dancing off guys easy and using his speed to create space for himself," Burakovsky said. "When you play with him, the challenge for the other guys is to find the open ice because when you do, the puck is going to come." 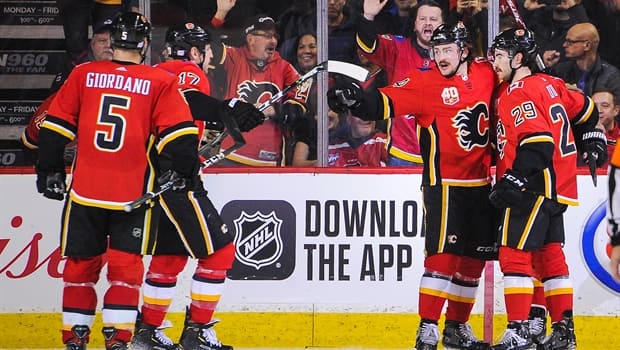 The Avs opened the scoring 3:21 into the first period when Burakovsky took a cross-ice pass from MacKinnon and fired a shot just inside the post.

Before the first period was over, Burakovsky made it 2-0 at 18:45, ripping a shot under the crossbar, shortly after a face-off win by MacKinnon.

MacKinnon assisted on both goals to give him 13 points (5 goals, 8 assists) in his last six games.

"He's got as good a shot as anyone on our team and we need to see him keep using it more," said Avalanche coach Jared Bednar, talking about Burakovsky.

'It's tough, playing from behind all the time'

The lead was 3-0 before the Flames finally got a goal, with Derek Ryan beating Philipp Grubauer under the crossbar at 17:41 of the second period. The goal ended a Calgary goalless streak of 167 minutes and 44 seconds, dating back to the third period against Dallas on Nov. 13.

"Before the game, there's a lot of energy in the dressing room, energy on the bench," said Ryan, who has four goals. "We give up a couple goals and all of a sudden the body language goes down a little bit, guys are frustrated, guys are down on themselves, down on each other."

Calgary has fallen behind 16 times in 24 games.

"I thought we were more engaged today than in other games," said Flames left-winger Matthew Tkachuk. "But it's tough, playing from behind all the time. We've got to change that because this is a very, very, very important road trip for us and we want to play better on the road."

Vladislav Kamenev also scored for Colorado (13-6-2). The Avs have won five of six overall and are 3-1-0 on a five-game road trip that wraps up on Thursday in Minnesota.

"It was huge, guys stepping up," said Grubauer, who himself was returning from a five-game absence (lower body). "Hopefully we get a couple guys back, but it was definitely nice to see, to get those performances."

Setting up a furious finish, the Flames drew within one on Mangiapane's fourth goal at 15:44 of the third. But, despite getting a power play for the last 21 seconds and having the goalie pulled, they could not take advantage of the 6-on-4.

Calgary has also run into injury issues with Travis Hamonic (lower body) and Sam Bennett (upper body) the latest to be sidelined.