Who blinks first? A list of NHL training camp no-shows

Josh Anderson, an emerging power forward with the Columbus Blue Jackets, was among four notable NHL restricted free agents without a contract as training camps opened across the 31-team league on Thursday. 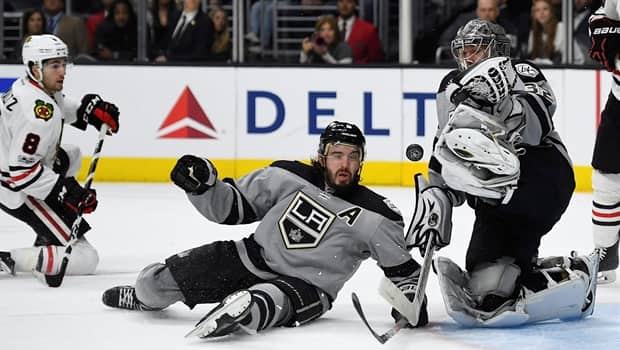 The L.A. Kings want you!

3 years ago
0:52
It's your chance to be a King for the day. The Kings will hold open tryouts as the club seeks qualified amateur goaltending candidates to provide emergency duties at all of its 2017-18 home games. 0:52

Close in age and size to former Columbus Blue Jacket Ryan Johansen, Josh Anderson also appears headed down the same path as the fellow power forward when negotiating a contract.

Johansen, who now plays for Nashville, was a restricted free agent in September 2014 and embroiled in a nasty negotiation with Blue Jackets management before agreeing to a three-year deal nearly a month later.

Johansen had led the team in goals and points the previous season and was trying to maximize his earning power. Anderson, on the other hand, was 11th in Columbus scoring during the 2016-17 season, but earned every bit of his $894,000 US salary with 17 goals in limited playing time in his first full NHL campaign.

On Thursday, the 23-year-old native of Burlington, Ont., was among four notable RFAs without a deal as camps opened across the 31-team league.

Seven years ago, a five-foot-six, 140-pound Anderson was passed over by 20 teams in the 2010 Ontario Hockey League draft, but he has grown into a fast-skating, crease-crashing six-foot-three, 225-pound right-winger.

It can change quickly, of course. One phone call. But one word used this morning to describe the gap between <a href="https://twitter.com/hashtag/CBJ?src=hash">#CBJ</a> and Josh Anderson: “vast"

When Blue Jackets general manager Jarmo Kekalainen sent the team's 2017 first-round draft pick, a 2019 second-rounder and forward David Clarkson to the Vegas Golden Knights in June, many believed the deal was made to keep the expansion team's hands off players like Anderson, who collected 29 points last season while averaging just 12 minutes of ice time.

Also Thursday, star centre Matt Duchene, with two years remaining on his contract with the Colorado Avalanche, ended talk of a potential holdout by appearing at camp and spoke briefly to reporters as he awaits a trade many expected in the off-season.

Matt Duchene will not answer questions. "Only here out of respect for teammates" <a href="https://t.co/SHvWrjsFLs">pic.twitter.com/SHvWrjsFLs</a>

A year ago, Calgary forward Johnny Gaudreau and Winnipeg defenceman Jacob Trouba were RFAs and stayed away from camp. Trouba, who had requested a trade, missed 15 games before settling on a two-year, $6-million deal last November, and remains with the Jets. Gaudreau signed a six-year pact before the Flames opened their season.

Here's a look at three RFAs expected to miss at least part of this year's camp.

The 22-year-old blue-liner, who has threatened to play in his native Russia, has 145 games of NHL experience, but his 2016-17 season was cut short by a fractured ankle. Zadorov played in 56 of Colorado's first 57 games, recording 10 assists and leading the Avalanche in hits with 153.

A 2013 first-round pick by the Buffalo Sabres, Zadorov was playing close to 25 minutes a game for much of February. The six-foot-five, 230-pounder was part of the package Colorado acquired from Buffalo for centre Ryan O'Reilly and left-winger Jamie McGinn on June 26, 2015.

A 23-year-old centre with elite speed, Athanasiou provided Detroit fans with hope for the future after scoring 18 goals in 64 games last season for the offensively challenged Red Wings. Camp opened in Traverse City, Mich., with contract talks said to be ongoing and Athanasiou mulling offers from Russia's Kontinental Hockey League.

Detroit, which is reportedly $2.5 million US over the $75 million salary cap, is said to have offered a two-year deal worth $3.8 million to Athanasiou, who made $628,000 last season.