At 40, Patrick Marleau has a chance to win his Stanley Cup with Sidney Crosby, Evgeni Malkin and the Pittsburgh Penguins after being traded from San Jose before Monday's deadline.

At 40, Patrick Marleau has a chance to win his Stanley Cup, with Sidney Crosby, Evgeni Malkin and the Pittsburgh Penguins.

The San Jose Sharks on Monday moved the veteran forward just hours before the 3 p.m. ET trade deadline for a 2021 third-round pick that becomes a second-rounder if Pittsburgh wins the title this year.

"Patrick is a player who can play anywhere in our lineup," Penguins general manager Jim Rutherford said. "He's a good two-way player, provides leadership and will be a good fit with our team."

Marleau provides a needed depth forward with scoring ability as the Penguins look to make a playoff run. They started the day in second place in the Metropolitan Division, two points behind Washington.

Marleau returned to the Sharks earlier this season after spending the first 19 seasons of his career in San Jose. He still possesses the speed that made him one of the league's most consistent scorers the past two decades.

"Patrick is one of the most iconic players to ever wear the Sharks uniform," San Jose GM Doug Wilson said. "Although we have had a disappointing season in San Jose, he deserves every opportunity to have a chance at winning a Stanley Cup, and we're happy to help accommodate that. We wish him the best of luck."

Patrick Marleau will wear #12 for the Penguins.<br><br>Dominik Simon offered his number to the storied veteran and will now wear #18. <a href="https://t.co/ShF1SoH2iB">pic.twitter.com/ShF1SoH2iB</a>

He spent the previous two seasons in Toronto, recording 43 goals and 41 assists, but was traded to Carolina last off-season in a move to shed salary and then bought out by the Hurricanes when he didn't want to play there.

Marleau has been one of the most durable players with his 846 consecutive games played ranking fifth all-time. He has played 1,715 games in his career since being drafted second overall in 1997. He ranks fifth all-time in that category and trails record-holder Gordie Howe by just 52 for the most ever.

Marleau has 561 goals and 625 assists in his career to go along with 68 goals and 52 assists in 177 playoff games. With the Sharks mired in 13th place in the Western Conference, this deal gives Marleau another chance at the post-season as he seeks his first Stanley Cup championship of his career. 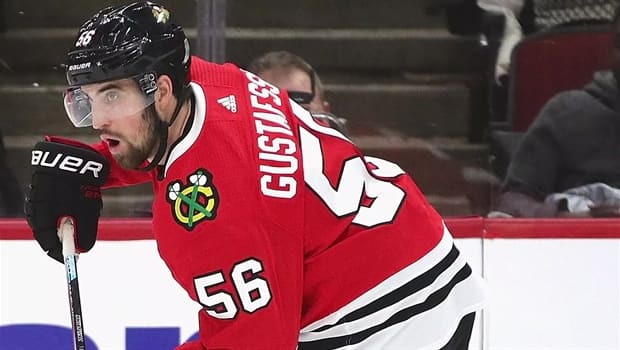 All the major moves from a busy trade deadline day

9 months agoVideo
2:43
Rob Pizzo tells you everything you need to know about who went where 2:43

Pittsburgh, currently two points behind Washington for the top spot in the Metropolitan Division, also acquired forwards Conor Sheary and Evan Rodrigues from Buffalo in exchange for forward Dominik Kahun. The move is a reunion for Sheary, who won the Cup with the Penguins in 2016 and 2017 before being moved to the Sabres due to salary cap issues.

"We feel good about our team," Rutherford said. "We have felt good about it all year. We feel better today. … Hopefully we get healthy in the next week or two, we have a whole team and see what we really got."

The Buffalo Sabres have acquired forward Wayne Simmonds from the New Jersey Devils in exchange for a conditional 2021 fifth-round pick, two people familiar with the trade told The Associated Press.

The people spoke on the condition of anonymity because the trade hasn't been announced.

Simmonds will remain with the Sabres for the duration of the season despite being in the final year of his contract, one of the people told The AP.

Simmonds, 31, adds depth to Buffalo's forward ranks. The Sabres have been looking for secondary scoring behind captain and leading scorer Jack Eichel.

Simmonds signed a one-year, $5 million deal with the Devils last off-season. The Devils will retain 50 per cent of Simmonds' remaining salary.

Simmonds has had two 30-goal seasons, with a career-best 32 goals for Philadelphia in 2015-16. He has eight goals and 16 assists for the Devils this season.

The Sabres (29-25-8) are six points behind the Toronto Maple Leafs for a playoff spot in the Atlantic Division. They have won five of their last six games.

An hour after the trade deadline passed, Lehner sent out a pair of tweets: one thanking Chicago and the other saying he is "really excited to join Vegas."

Really exited to join Vegas. Going to be a ride. Can’t wait to get there but please no drums at the airport I’m shy...

The 28-year-old Swede enjoyed a career season with the New York Islanders in 2018-19, finishing as a Vezina Trophy finalist while winning the William M. Jennings Trophy and the Bill Masterton Memorial Trophy. Lehner owned a 25-13-5 mark with a career-best six shutouts, a 2.13 GAA and .930 save percentage.

Haula has 12 goals and 22 points this season, Wallmark 11 goals and 23 points and Luostarinen has appeared in eight games.

The 26-year-old Trocheck has slipped to 10 goals and 36 points in 55 contests this season but has points in three of his past four outings.

"Vincent brings elements of skill and competitiveness that fit the mold of the style we want to play," Hurricanes general manager Don Waddell said in a statement. "He's a right-handed centre who is excellent in the faceoff circle.

"With two years left on his contract after this one, this fills a need for our roster for this year and moving forward."

Signed through 2022 at $4.75 million a season, Trocheck appears to have slowed following a leg injury last season, but still in his prime at 26 there is potential for improved play from the Pittsburgh native in a different environment.

The 35-22-4 Hurricanes occupy the second wild-card playoff spot in the Eastern Conference with 74 points, tied with Columbus, but Carolina has two games in hand.

With files from The Associated Press & Field Level Media