Jack Eichel had two goals and an assist in the Buffalo Sabres' 6-4 victory over the Toronto Maple Leafs on Friday.

Toronto backup's struggles continue on front half of back-to-back

Ralph Krueger's first experience in the Buffalo-Toronto rivalry was a memorable one.

The first-year Sabres coach saw his team overcome an early deficit to beat the Maple Leafs 6-4 on Friday. It was a performance that the inconsistent Sabres needed — and one that Krueger won't soon forget.

"You can feel that it was a highlight day, that it was an experience outside the regular 82-game schedule," Krueger said. "You could feel it really from the get-go this morning and it was a lot of fun."

With large groups of Toronto fans all over the building, it added up to an electric atmosphere.

WATCH | Leafs lose front half of back-to-back against Sabres: 11 months ago
1:58
After jumping out to a 2-0 lead Toronto got a little complacent and made some costly turnovers to give the Sabres a comeback victory.  1:58

"We hadn't beat them in a while so it's good to get the two points and I think we needed it as a group as well," Eichel said. "It's two cities that are pretty close to each other and the Leafs have such a big following and a lot of people travel order the border to watch these games. We'd obviously like to see more Buffalo fans in the crowd but it's a little extra motivation."

'It got away from us'

"We had a good start to the game ... but I think it got away from us," centre Auston Matthews said. "Regroup and get ready for tomorrow."

The fast-paced game was the first half of a home-and-home series, with the two sides meeting again Saturday night in Toronto.

The Leafs were all over Buffalo at the start, opening up a 2-0 lead, before the Sabres turned the tables and answered with four straight goals in the second period. 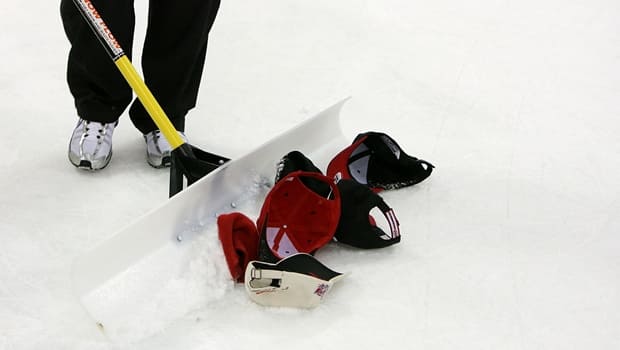 11 months ago
2:00
For the fourth year in a row hat tricks are on the rise in the NHL, and Rob Pizzo looks at some players who have plenty of experience scoring three goals in a game. 2:00

Tavares opened the scoring with 1:06 remaining in the first period, collecting a setup from winger Ilya Mikheyev in the right circle for an easy finish. Tavares picked up his second of the game 1:21 into the second, poking home a rebound after his initial shot fell wide.

"We got the lead ... we just weren't very hard on pucks and we were sloppy coming through the neutral zone," Tavares said. "We kept shooting ourselves in the foot."

Skinner began Buffalo's surge 5:45 into the second, taking a drop pass from Johan Larsson and beating Michael Hutchinson to the glove side for his 10th goal of the season.

Eichel evened the score midway through the second, racing out of the penalty box and ripping a hard wrist shot into the top corner. It was his 15th goal of the year.

"The way he can take over games, it's impressive," winger Marcus Johansson said about Eichel. "Not a lot of guys can do that. He's so dominant when he gets going like that."

Mittlestadt made it 3-2 with 7:52 left in the second, redirecting a shot from the point by defenceman Marco Scandella. It was Mittlestadt's first point since Oct. 22, snapping a streak of 15 games.

Olofsson made it 4-2 before the end of the second on a terrific setup by Eichel. The Buffalo captain danced in the offensive zone — taking the puck from Toronto defenceman Jake Muzzin and spinning him around — before spotting Oloffson in the right circle, and the defenceman beat Hutchinson high to the glove side.

Timashov got the Leafs back in it 6:50 into the third, burying Jason Spezza's feed from the slot with a one-timer.

Vesey restored Buffalo's two-goal lead midway through the third, taking advantage of a bad Toronto miscue. Vesey stole the puck from Andreas Johnsson in the slot and beat Hutchinson with a deke through the goalie's legs.

Kapanen made it 5-4 with 7:50 remaining, tucking a shot inside the right post on a pass from Nic Petan.

Toronto's best chance to tie it late came on a shot by Matthews from close range with 1:37 remaining; Ullmark denied Matthews with his glove.

Eichel sealed it with an empty-net goal with 27 seconds remaining.