Pair of Russians spar in each player's 1st post-season bout

Well, the Washington Capitals captain added that dubious item on Monday night after dropping the gloves with Hurricanes rookie Andrei Svechnikov in the first period of Carolina's 5-0 win in Game 3 on Monday.

At 10:59 into the opening frame, the pair of Russians got tangled up behind the play in the Capitals' end. They exchanged several blows before Ovechkin connected with a knockout punch to the right side of Svechnikov's head.

The 19-year-old winger immediately fell to the ice and didn't get up for several moments. He appeared dazed as he was helped off the ice. Each player was given a five-minute fighting major.

Svechnikov is in the concussion protocol, according to the team. Coach Rod Brind'Amour said Tuesday that he assumes Svechnikov, who was wearing a helmet, will miss Game 4 of the best-of-seven series Thursday night. He added he's "going to be real careful" and is "certainly not going to rush him back." 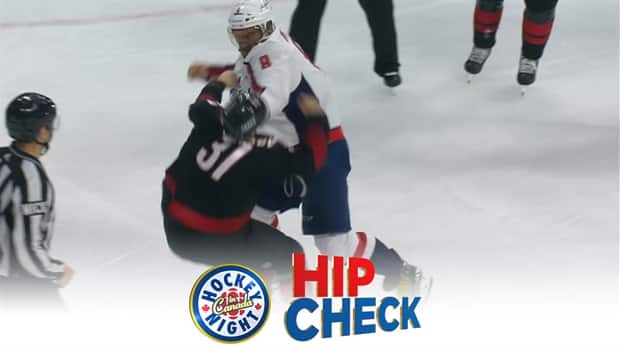 2 years ago
1:33
Washington Capitals captain Alexander Ovechkin drops the gloves with Carolina Hurricanes' rookie in Game 3 of their first round matchup. 1:33

It was the first-ever NHL fight for Svechnikov, who was selected second overall by the Hurricanes in 2018. Ovechkin has never fought in the playoffs. According to Hockey Fights, the 33-year-old hasn't had a bout since Dec. 12, 2010, when he fought Brandon Dubinsky of the Columbus Blue Jackets.

The Hurricanes later announced that Svechnikov wouldn't return to the game due to an upper-body injury. His absence is a blow for Carolina, which trails the best-of-seven series 2-1.

"We all battled together. All 20 guys battled hard. ... [Svechnikov is] our brother, and we stand up for each other. We knew we needed to get this win, not just for us, but for him," said fellow Hurricanes rookie Warren Foegele, who had two goals and an assist on Monday.

Svechnikov had an assist in his post-season debut on Thursday and followed that up with a two-goal performance in Saturday's loss in Washington. He proved to be a valuable asset to his team during the regular season, scoring 20 goals and 37 points in 82 games.

It's not the first time the teenager has met the Russian superstar. The pair met last spring ahead of the NHL's entry draft and Ovechkin wished the aspiring NHLer luck.

"[Ovechkin] just told me good luck in the draft and you will go high," Svechnikov told Sporting News of their meeting in June.

"It's just an honour to have met with him," Svechnikov told the Associated Press at the time.