Anders Lee and Jordan Eberle scored and Nick Leddy had two assists as the New York Islanders beat Ottawa 2-1 on Saturday, handing the Senators their sixth loss in a row.

The good news for the Ottawa Senators is that Matt Duchene collected his first point in eight games since being acquired from the Colorado Avalanche.

The bad news is they dropped their sixth straight game, falling 2-1 to the New York Islanders Saturday night.

"Nice to get the monkey off and it feels good [to score] but it doesn't feel great because we didn't get the result we wanted. We played a heck of a hockey game and we felt like we deserved better. We're doing everything right except scoring," said Duchene, who had four goals and 10 points in 14 games with Colorado.

Anders Lee and Jordan Eberle scored in the win, the third in a row and sixth in the past seven games for the Islanders (14-7-2), who got a 31-save performance from Jaroslav Halak.

Duchene scored his first goal with the Senators (8-8-6) and Craig Anderson made 22 saves in defeat. 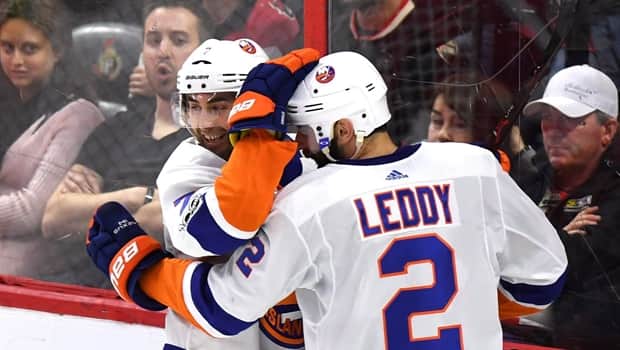 "I've yet to see a team that gets to where they want to go at the end of the season that doesn't go through some adversity. At the end of the day there's nothing we can do about it now but with the team we have in here it's unacceptable. We're too good a team to keep losing," said Duchene.

After Lee opened the scoring in the second period, Eberle gave the Islanders a 2-0 lead at 14:10 of the third period — just minutes after a goal was waived off as he was going to be assessed a goaltender interference penalty.

The Senators were unsuccessful on the ensuing power play, just as they were with the previous four opportunities in the game, but Duchene did score with the man advantage at 15:39 to pull the Senators to within one.

That goal snapped an 0 for 23 stretch for the Senators on the power play. They finished 1 for 5 in the game while the Islanders were 1 for 6.

"It's a big win and it would have been nicer with a shutout, but at this point I'll take any win," Halak said.

"I think we worked hard but there were too many penalties on both sides so it took away any momentum."

The night started slowly with both teams only registering a single shot each through the first five-plus minutes of play. The pace didn't increase much throughout the period either, but Anderson was called upon to make a couple of big saves.

'We still have to improve'

After a loss in Columbus Friday, Anderson expressed his desire to coach Guy Boucher to get back in the net Saturday when normally the goaltending duties will be shared in back-to-back situations.

"If you don't want to be in the net you don't belong in this league. It's the coach's decision ultimately and when he asked me how I felt I was happy to tell him the truth. I'm always striving to get better and I felt good. I felt like I did my best to give the team a chance to be in the game," Anderson said.

"Sometimes you don't get rewarded for your play and I thought this was one of our better games in the last few and a step in the right direction. We still have to improve."

"Good is not going to cut it for us. We need to find a way to win a game and when we do we have to hope we can build off that and go on a stretch in the other way," he said.

"We all know in here that we have a good team and whether it's going to be a good one or a bad one we just need a win."