Penguins beat Canadiens in Game 2 to pull even in series

Sidney Crosby, Jason Zucker and Jake Guentzel scored for the Pittsburgh Penguins in a 3-1 victory over the Montreal Canadiens on Monday night to tie the best-of-five qualifying series at one game apiece.

Any remnants of the Montreal Canadiens' feel-good glow from their series-opening overtime win over Pittsburgh were quickly dashed Monday night.

The fifth-seeded Penguins took advantage of a flat offensive effort from the Canadiens for a 3-1 victory at Scotiabank Arena that tied the best-of-five series at one game apiece.

Montreal's big guns were silent as the Canadiens went 0 for 3 on the power play, managing only one shot with the man advantage.

"Our best players have to be our best players," said Montreal head coach Claude Julien. "Tonight we had some guys that really struggled and a lot of those guys happened to be on the power play."

The 12th-seeded Canadiens delivered a 3-2 upset win on Saturday but were listless from the start in Game 2 and never recovered.

WATCH | Zucker's goal pushes Pens to even series with Habs: 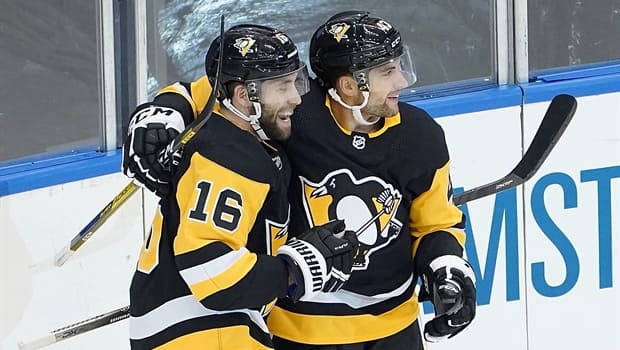 Zucker's tally pushes Pens to even series with Habs

3 months ago
0:57
Sidney Crosby, Jason Zucker and Jake Guentzel each scored in Pittsburgh's 3-1 win over Montreal to tie their best-of-five series at one. 0:57

Crosby gave Pittsburgh an early lead and Price — by far Montreal's best player — did well to keep it a one-goal game until Zucker tallied with 5:19 left in the third. Price was pulled after Kotkaniemi's goal for the extra attacker but Guentzel sealed the win with 9.1 seconds left.

Game 3 is scheduled for Wednesday night.

"There's no panic," Penguins head coach Mike Sullivan said of his team. "They are a confident group. They believe in one another and they control what they can.

The Penguins controlled the early offensive play and Price had to be sharp right away, denying Zucker after he was sent in alone a few minutes into the game.

Pittsburgh kept the pressure on and was rewarded when Guentzel's cross-ice pass found Crosby streaking down the left wing. The Penguins captain snapped the puck between Price's legs at 4:25.

It was the 188th playoff point of Crosby's NHL career, moving him into an eighth-place tie with Joe Sakic and Doug Gilmour.

The Canadiens, who were outshot 14-7 in the first period, nearly scored on a Brett Kulak wrap-around attempt midway through the stanza.

Pittsburgh's Jared McCann dislodged the net just before Kulak flipped the puck over Murray's shoulder. After a review, the officials decided it was not a goal.

Montreal came out with more pace in the second period but could only manage a few decent chances. The best opportunity came when Jonathan Drouin found Joel Armia for a goalmouth redirect, but Murray made a brilliant glove save.

Price, who made 39 saves in Game 1, stoned Kris Letang twice on a scramble midway through the second period. Murray also had his moments and delivered key saves when needed.

"Obviously it wasn't our best effort," said Canadiens defenceman Shea Weber. "They were the better team tonight but Carey gave us a chance."

As Montreal pressed for the equalizer in the third, Kulak got caught at the blue line to give Pittsburgh a 2-on-1 break. Conor Sheary broke out down the side and he found Zucker in front to make it a two-goal game.

The Penguins also struggled on the power play, going 0 for 5 on the night to fall to 1 for 12 in the series.