Paul Stastny scored to end a lengthy goal drought by Vegas forwards, Robin Lehner stopped all 24 shots he faced for his fourth shutout of the playoffs and the Golden Knights rediscovered their winning ways and beat the Dallas Stars 3-0 Tuesday in Game 2 of the Western Conference final, evening the series.

Only defencemen had found back of net for Vegas dating to Game 4 vs. Vancouver

After running into a hot goalie late last round and being shut out in the opener of the Western Conference final, pressure mounted in the minds of the Vegas Golden Knights in Game 2.

When Paul Stastny scored to end a lengthy goal drought by Vegas forwards, the entire mood changed. William Karlsson and Tomas Nosek made it three goals in less than 10 minutes, Robin Lehner stopped all 24 shots he faced and the Golden Knights rediscovered their winning ways and beat the Dallas Stars 3-0 Tuesday night, evening the series.

"We were snake-bitten for a while there and think everybody was gripping their stick a little tight," forward Chandler Stephenson said. "We're at our best when we have that swagger and we're making plays and tough to defend. It was nice to get that mojo back tonight and even the series."

Stastny's second-period goal was the first by a Vegas forward with an opposing goalie in net in 276:24, dating to Game 4 against Vancouver last round. His and Karlsson's were the kind of goals the Golden Knights became accustomed to scoring — ones that are difficult or impossible for someone like Anton Khudobin to stop. 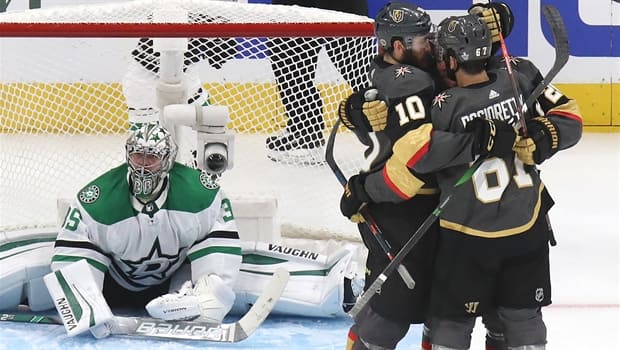 2-minute NHL playoff recap: Golden Knights get their mojo back

20 days ago
2:29
In his daily recap, Rob Pizzo breaks down game 2 of the Western Conference final that included some history made. 2:29

After getting flustered by hot Vancouver Canucks goalie Thatcher Demko and failing to crack Khudobin in a hard-hitting Game 1 that was played at the Stars' pace, Vegas finally looked like the team that earned the top seed in the West and steamrolled through the first round and halfway through the Vancouver series.

"That first goal relieved a little bit of pressure," coach Peter DeBoer said. "We got our game back, and I think once we got that first goal, i think we looked like we normally do, which was making plays and finding space and sticking pucks in the net."

The return of enforcer Ryan Reaves was just one element of that. With Reaves suspended a game for an illegal check to the head, DeBoer didn't start his physical fourth line as he had in 34 consecutive games since the All-Star break in January.

William Carrier, Nosek and Reaves started and came out hitting. Reaves hit Dallas captain Jamie Benn twice in the first 30 seconds, and the Golden Knights dictated the physicality the way the Stars did two nights earlier.

DeBoer believes Reaves and Carrier set the tone because "they start on time" and are ready to play. The Stars found that out quick.

"We expected them to come out hard and respond," centre Tyler Seguin said. "They're a great hockey team."

After no goals in the first period, Stastny scored on a redirection in front from Max Pacioretty. With the agitating Stars winger in the penalty box minutes later, Karlsson scored on the power play with Mark Stone sliding in front to screen Khudobin. 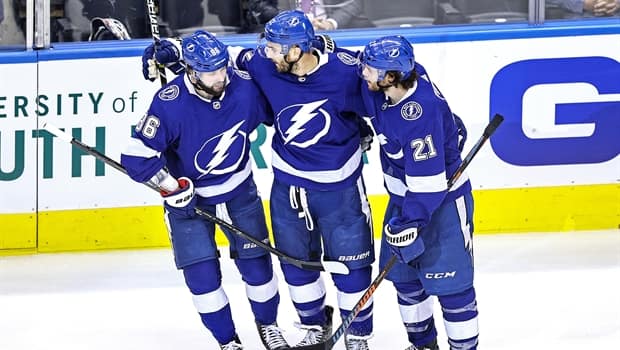 21 days ago
3:02
In his daily recap, Rob Pizzo breaks down how the Lightning dismantled the Islanders in game 1 of the Eastern Conference Finals. 3:02

Defenceman Shea Theodore, the only Vegas player to beat Demko in the final three games of that series, was in some pain on the bench early in the second after losing an edge, and it appeared he scored on the power play to make it 3-0. Dallas coach Rick Bowness successfully challenged for goalie interference to waive it off, but Nosek finished off a perfect tic-tac-toe passing play later in the period to give the Golden Knights the three-goal lead for real.

"I think we hung on in the first," Stars winger Mattias Janmark said. "Eventually when you're on your heels, you're going to get scored on and we did, and they kept rolling. They were in charge all game."

Allowing three goals on 27 shots and Vegas' 27-12 domination in pucks on net was enough for the Stars staff to pull Khudobin at the second intermission. Rookie Jake Oettinger made his NHL debut in the third and didn't face a shot until more than 11 minutes in.

Much like Game 1, in which Vegas was the better team in the third, Dallas turned the tables in the final period Tuesday but couldn't score, let alone come back. Lehner's shutout was his fourth of the playoffs, and he has not allowed a goal in more than 131 minutes.

"We out-competed them today and played a hell of a game, so it made it a little easier for me," Lehner said. "I feel pretty good right now."