Will Capitals-Jackets Game 4 also go to OT? Series has been a long one so far

Boston's Patrice Bergeron is one of three finalists for the Frank J. Selke Trophy announced by the NHL Wednesday night.

Sean Couturier of the Philadelphia Flyers and Anze Kopitar of the Los Angeles Kings are the other two up for the award given to the league's best defensive forward as voted on by members of the Professional Hockey Writers Association. The winner will be announced June 20, during the NHL Awards in Las Vegas.

Bergeron placed sixth in the NHL in face-off win percentage (57.3 per cent) and was a league-best 58.3 per cent while shorthanded. The 14th-year Bruin has four career Selke wins, tied for the all-time lead with Montreal Canadiens forward Bob Gainey, who took the Selke in each of the first four years it was presented from 1978 through 1981.

Bergeron is a finalist for a record seventh consecutive year, surpassing the six-year streak of Detroit's Pavel Datsyuk from 2008 through 2013.

Couturier tied for third place in the NHL in plus-minus with a plus-34 rating and ranked second league-wide in total ice time for forwards (1,770:31). He is a first-time Selke finalist.

Overtime not hurting Caps, Jackets yet

Three straight overtime finishes to start the post-season? No problem.

"Real ugly" was how Eller put it afterward. 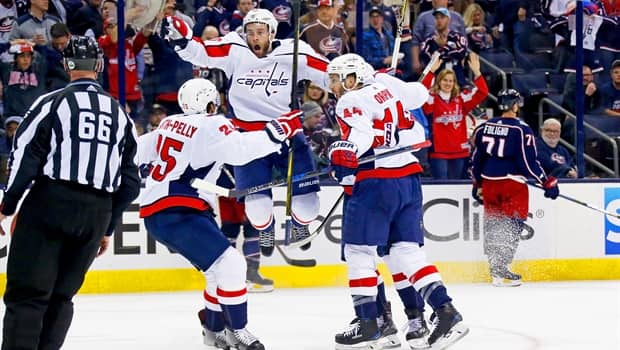 But it was a win, one that Washington badly needed after losing two straight overtime games at home. The Capitals needed 89 minutes to win Game 3, the longest game in Blue Jackets history and one played in front of the largest hockey crowd ever at Nationwide Arena.

Of the first 26 games of the NHL playoffs, there have been four overtime games in all, with three of them in this series (Vegas and Los Angeles also had a double OT game during the Golden Knights' sweep). It is the sixth time in playoff history that the first three games of a series went to OT.

Care to make it four?

The two teams go at it again on Thursday night (7:30 p.m. ET) with Columbus looking to take a 3-1 lead. Despite the extra hockey and nail-biting drama, nobody is feeling the burn. At least not that they're saying.

"I didn't see any guys dying out there," Columbus captain Nick Foligno said. "I think we're in really good condition for this time of year. I don't think any guys worried about that."

Washington coach Barry Trotz said his team is accustomed to managing overtime games and then coming back. It all builds character, he said.

"The playoffs are a test of will, even if it's not overtime," he said. "What I think overtime makes you do is concentrate when you're tired. You have to be in that moment. You can't cut that corners, you can't do that fly-by when you're really tired, you can't cheat because those are the times the puck ends up in the back of your net."

"I'll tell you right now, if we're fatigued three games in, holy crap," he said. "We're just starting. It was a long game last night and we've had some overtime games, but that's all part of it. You just can't be tired. I don't even think you can start talking about fatigue until you're in a couple of rounds from now."