Jake DeBrusk scored twice in Boston's dominating third period to help the Bruins rally and beat the Carolina Hurricanes 4-3 on Monday to take a 3-1 lead in their first-round playoff series.

Jake DeBrusk, Brad Marchand and the Boston Bruins quickly went from trailing by two goals to overwhelming the Carolina Hurricanes with a dominating third period.

DeBrusk scored twice while the Bruins scored four straight goals to rally and beat the Hurricanes 4-3 on Monday to take a 3-1 lead in their first-round playoff series.

Marchand and Connor Clifton also scored in the third, helping Boston erase a 2-0 deficit entering the period. It was a stunning turnaround — complete with the Bruins taking a 16-2 edge in shots on goal in those final 20 minutes — that now has Boston within a win of advancing in a series that looked headed for a 2-2 tie.

"We always say it's a process and we continue to build every shift," Marchand said. "That's what we did. We just continued to impose our will and play our game. And when we play like that, we're a tough team to play." 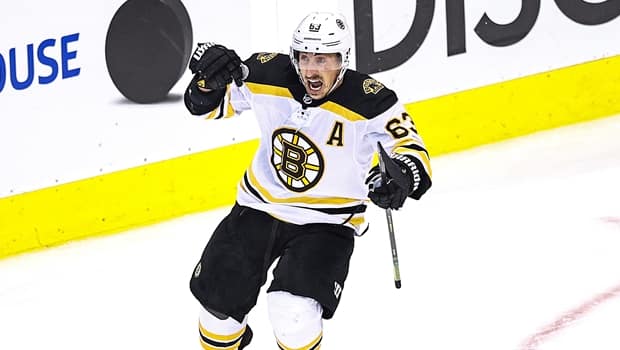 Game 5 is Wednesday, with the Bruins having the chance to eliminate the Hurricanes from the Stanley Cup playoffs again after sweeping Carolina in last year's Eastern Conference finals.

"We weren't ready to continue to do that dig in that we needed to do — little battles," Carolina coach Rod Brind'Amour said. "They threw everything at us, and we didn't have an answer."

The Bruins entered the post-season as the President's Trophy winner with a league-best 100 regular-season points, but they went 0-3 in the round-robin series to determine the top four seeds in the Eastern Conference playoffs. Then came the surprise news that goaltender Tuukka Rask was opting out of the playoff run to be with his family shortly before Game 3.

But Boston has won two straight, first by dominating Game 3 from the second period on and then by turning in an even more impressive showing in the third period of Game 4.

It started with DeBrusk's first goal, when he saw James Reimer coming out to play the puck and dove to push it past the netminder to get Boston on the board. Minutes later came Charlie McAvoy's hard hit on Jordan Staal that knocked Carolina's captain from the game, followed by Clifton zipping the puck past Reimer and just inside the top left corner of the goal to tie it.

WATCH | Hurricanes' Svechnikov goes down after tangle with Chara in Game 3: 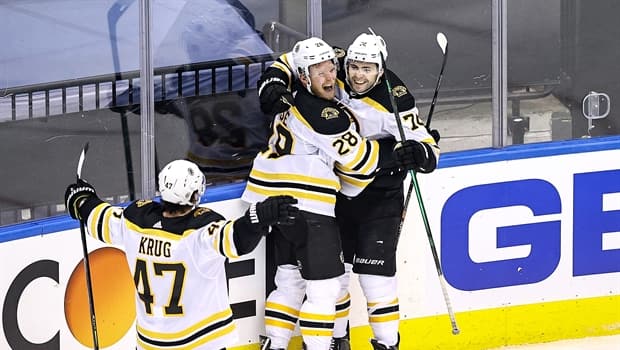 5 months agoVideo
1:02
Jake DeBrusk scored a pair of the Bruins' four third period goals to come back on Carolina and take a commanding series lead. 1:02

Boston went ahead for good when Torey Krug passed ahead off the boards to Marchand, who got free to bury a 1-on-1 chance against Reimer for the 3-2 lead at 11:40. And DeBrusk added one more, getting an easy putaway from just outside the crease off a feed from Ondrej Kase at 14:17.

DeBrusk had managed one goal and no assists in Boston's first six post-season games.

"There's other ways he can contribute, especially in the playoffs," Bruins coach Bruce Cassidy said. "But we need some goals. ... Sometimes he gets streaky so hopefully this sets him off."

Justin Williams and Jordan Martinook scored to give Carolina the 2-0 lead before the Bruins ran off four straight goals, while Teuvo Teravainen added a goal at 18:33 of the third to bring Carolina within one. 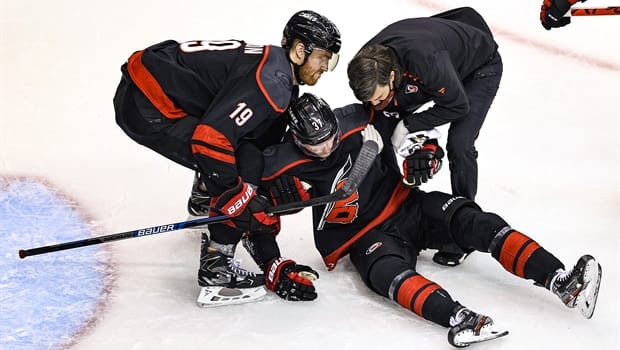 Svechnikov, referee both helped off of ice after strange play in Game 3

Reimer made his second start of the series in net for the Hurricanes after Petr Mrazek had started Games 1 and 3, shutting out the Bruins for two period before faltering as Boston took over by relentlessly keeping the puck in the offensive zone. He finished with 29 saves.

Jaroslav Halak finished with 16 saves, though the Bruins made it easy on him in the third by not surrendering a shot until Teravainen's late goal.

"That third period was certainly not what we're accustomed to," Williams said. "We got it handed to us."