Carter Hart made 23 saves for his first-career playoff shutout as the Philadelphia Flyers defeated the Montreal Canadiens 1-0 on Sunday to take a 2-1 lead in their first-round series.

Carter Hart just played better — and got some help from his friends.

The Philadelphia goalie made 23 saves to record the first playoff shutout of his career as the Flyers defeated the Canadiens 1-0 to take a 2-1 lead in their opening-round series.

"That was style of game we expected," Canadiens winger Brendan Gallagher said. "They find a way to put one in our net and we were unable to beat their goaltender.

"You give up one goal, you should be able to win."

Jakub Voracek scored for Philadelphia, the No. 1 seed in the Eastern Conference as part of the NHL's restart to its pandemic-hit season.

"It was a greasy hockey game," Flyers head coach Alain Vigneault said. "Both teams worked extremely hard. It was hard to make offensive plays. Both teams were not giving a lot of room." 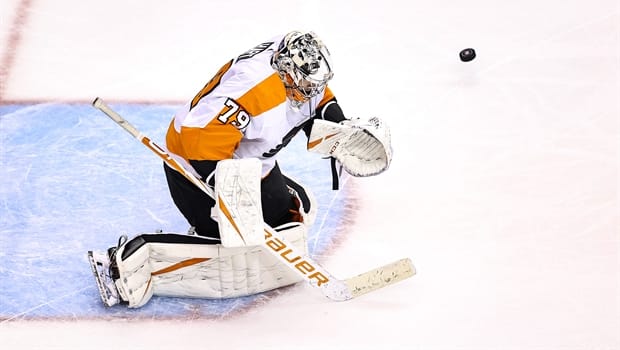 2 months ago
1:26
Jakub Voracek scored early in the first and Carter Hart stopped all 23 shots for his first playoff shutout.  Philadelphia took a 2-1 series lead over the Canadiens 1:26

Carey Price stopped 19 shots to take the loss for Montreal inside an empty Scotiabank Arena.

After the Flyers opened the scoring early in the first period, Montreal centre Jesperi Kotkaniemi hit the crossbar 30 seconds into the third — the fifth time the Canadiens found iron in just over 40 minutes.

Hart then took an Artturi Lehkonen shot off the mask on a shorthanded 2-on-1 with under eight minutes to go in regulation.

"Just got to do my job," said Hart, who grew up idolizing Price. "That's what it comes down to at the end of the day."

'Tip your hat to a hot goaltender'

Kotkaniemi shovelled a shot towards the Flyers' net with Price on the bench for an extra attacker with 50 seconds left, but Hart was there again as Philadelphia, which blocked 24 shots on the night, improved to 34-0-2 this season when leading after two periods.

"Their goaltender played well," Price said. "Sometimes you gotta tip your hat to a hot goaltender. We did all the right things to win."

The Canadiens were coming off that Game 2 where they dominated the Flyers, who sat 18 points ahead of them in the standings when the NHL suspended its season because of COVID-19 in March, from start to finish minus head coach Claude Julien after he was rushed to hospital with chest pains Wednesday night. 2 months ago
5:41
Despite dropping a tight 1-0 game Kirk Muller was impressed with his team's 'great effort' and determination.  5:41

The 60-year-old, who is resting at home and expected to make a full recovery, had a stent installed in one of his coronary arteries.

Perhaps looking to draw attention away from his team's embarrassing performance Friday, Vigneault criticized Montreal associate coach Kirk Muller, who is running the bench in Julien's absence, for putting his No. 1 power-play unit out in the dying minutes of a blowout.

The Flyers had a much better start Sunday against the speedy Canadiens after failing to register a shot until there was 3:36 left in the opening period of Game 2. Philadelphia nudged in front at 5:21 of the first following an offensive zone faceoff when Voracek redirected the puck up off himself and in past Price after Claude Giroux took the initial shot.

Montreal came close later in the period, with Kotkaniemi, who has four goals during the restart, whipping a shot off the post before Brett Kulak blasted his effort off the crossbar seconds later.

"It was a tight game," Kotkaniemi said. "We had the chances we needed. Just need to bury them."

Not the same jump

The Canadiens then had to kill off a four-minute penalty to Kotkaniemi for high-sticking on former Montreal teammate Nate Thompson, and got some good fortune of their own when Travis Konecny found iron on a shot through a screen.

Ranked 24th of the 24 teams included in the resumption of play, the Canadiens didn't have the same jump as in Game 2, but still had a number of chances in the second to get even.

"We didn't get the same flow through the middle as the last game," Muller said. "We got caught more into the boards. There's some corrections that we can make, but we didn't you utilize our speed as much."

Gallagher, who has yet to find the back of the net in the post-season tournament despite a league-high 31 shots, hit the outside of the post and then forced a good save out of Hart off a turnover.

"No sense in feeling sorry for yourself," Gallagher said of his dry spell after scoring 22 times in 2019-20. "Gotta find a way to battle through that. You gotta try and fight the urge to be frustrated.

The Flyers netminder then stopped Nick Suzuki with his glove on a Canadiens power play before the Montreal rookie hit another post on a shorthanded 2-on-1.

Jonathan Drouin then jumped on a Scott Laughton giveaway, but Hart was there again to shut the door on a night where Montreal probably deserved a better fate.

"Our guys didn't quit," Muller said. "It was great effort."