Geoff Ward hardly sounded heartbroken Sunday when talking to reporters about the one that got away after his team gave up a lead late in the third period before losing in overtime to the Dallas Stars on Sunday.

'This is awesome. We can hardly wait to get to Game 5,' Geoff Ward says

Geoff Ward is a school teacher by trade, so he gets the importance of setting a positive example for his charges.

Sure, his Calgary Flames were just 11.9 seconds from taking a 3-1 series lead over the Dallas Stars in the first round of the Stanley Cup playoffs.

And sure, they were rattled after surrendering the tying goal to Joe Pavelski followed by an Alexander Radulov overtime marker.

But Ward hardly sounded heartbroken Sunday when talking to reporters about the one that got away. The series is deadlocked 2-2.

"We've got nothing to be ashamed about," the upbeat Flames' interim head coach said via Zoom. "I think our team gave a real good accounting of themselves tonight.

"I think it's easy for us to put it behind us. We've been doing it for a while now. Our guys' focus is in the right place. I think we can be happy we played a good game." 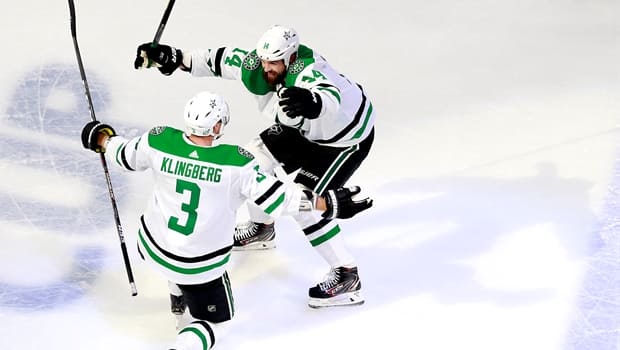 Radulov's redirect in OT pulls Stars even with Flames

2 months ago
1:33
It took Dallas 62 shots on goal to finally send Calgary packing in their 5-4 overtime victory on Sunday. 1:33

Angst-ridden Flames fans would beg to differ, judging by the emotional reaction on social media and the local radio call-in show. They pointed to the dominance of Dallas defencemen Miro Heiskanen, John Klingberg and Jamie Oleksiak. They bemoaned Calgary's inability to clear puck out of the defensive zone.

They complained about the five-on-five struggles of Calgary's first line of Johnny Gaudreau, Sean Monahan and Elias Lindholm.

They raved about goalie Cam Talbot's 57-save performance and worried out loud about Calgary's chances of winning another game if the Flames again give up that many shots.

"Any time you lose, it sucks," said Monahan, who collected two assists with the man advantage in a losing effort. "But the series is tied 2-2. I thought we competed the whole game, and we had our chances, too.

"We have to look at the positives there and be ready for the next game."

The next game Tuesday is shaping up as a defining test of Calgary's resilience — and resolve.

"I think we've found out some real good things about our character to this point," Ward said. "But now it comes down to a best-of-three. This is the beauty of the playoffs. Two good teams going at it, and we're sawed off after four games.

"How can you not like that? These are the games everyone wants to play as a young kid, imagining playing in games that matter this time of year. This is awesome. We can hardly wait to get to Game 5."

Matthew Tkachuk's status for Game 5 is uncertain. The agitating forward missed his second straight Sunday with a suspected concussion. It's not  known if or when the alternate captain — arguably Calgary's most valuable player outside of Talbot — will return.

But unsung heroes are stepping up. Punishing centre Sam Bennett is arguably playing the best hockey of his career with five goals and seven points in eight playoff games.

Forward Tobias Rieder tied an NHL record Sunday by scoring his third shorthanded goal of the same playoff run — pretty remarkable for a guy who cracked the Calgary roster on a training-camp tryout and who failed to score a single goal last season in 67 games with Edmonton.

"The guys on our team love him," Ward said. "He'll do whatever it takes to win."

For the Flames to win Game 4, they need more discipline after taking seven minors in Sunday's defeat.

"I've got no issue with what the referees were calling," Ward said. "The fact is we can't put ourselves short-handed that many times."

That's about as far as Ward's criticism went. His team lost in heartbreaking fashion. The teacher didn't want to pile on with lectures or pointed barbs that could undermine his players' confidence.

Especially not with the series still up for grabs.

"We move on," Bennett said. "Short memory. It's 2-2. Two good teams moving on. It's exciting hockey.

Their coach won't let them.