So many questions linger after a campaign of turmoil for Calgary. From the terrifying collapse of defenceman T.J. Brodie at practice, to the dismissal of former head coach Bill Peters for racist comments during his time in the American Hockey League, nothing was easy for the Flames.

From Giordano to Talbot to Gaudreau, Calgary has to answer tough questions

Hockey fans in Alberta's most populous city may beg to differ given the outcome.

"Can't say I blame him," the Calgary netminder said after the Stars dispatched the Flames in six games to advance to the second round against Colorado.  "I would have done the same thing."

Playing their best hockey of the series, the Flames staked out a 3-0 lead in the first period of Game 6. The period ended 3-1

Then it all unravelled. Dennis Gurianov beat Talbot just 58 seconds into the second period. The Dallas forward fired another one through traffic at 3:25 to tie the game.

In came backup David Rittich, who hadn't played a meaningful game in five months in place of Calgary's most valuable player. 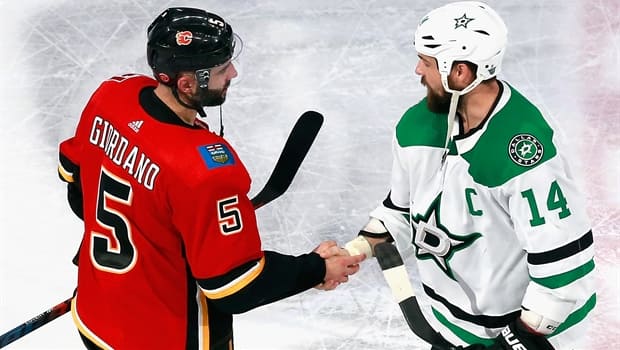 2-minute NHL playoff recap: Flames eliminated (and it was ugly)

2 months ago
2:59
In his daily recap, Rob Pizzo breaks down the Flames collapse against the Stars, the Capitals leaving the bubble, and a head scratching suspension. 2:59

"It was a 3-0 hockey game for us, and I had been there all playoffs for us," Talbot said. " When we needed it the most, I wasn't there. Some of those shots are obviously saveable and the onus is on me there.

"As much as I hated getting pulled, the momentum was changing, and we had to do something. I could feel it coming."

Rittich stopped just six of nine shots before Talbot went back in for a third period that was simply a formality.

"He's the reason why we're here," Calgary captain Mark Giordano said of Talbot. "I think what Wardo was trying to do was to get some momentum to shift there when he changes goalies.

"I was happy to see Talbs get the third because he deserves to go right back in there and battle with us — because he's been our best player for the entire playoffs."

On a historic night, the Stars became the first NHL team to trail by three in a playoff game and go on to lead by four.

The collapse, for Calgary, was epic.

"It's an empty feeling," said Flames centre Mikael Backlund. "We couldn't stop the bleeding, and it happened so quick. It's hard right now."

This is the kind of loss that could lead to an overhaul of the roster and a dismantling of the core.

"This is an unbelievable group of guys," Giordano said. "We all care about each other, so it's really tough."

Giordano won the Norris Trophy last season as the NHL's top defenceman. He is now 37 and struggled during these playoffs.

Forward Johnny Gaudreau showed flashes of his former brilliance but disappeared for long stretches this season amid trade rumours.

In goal, Talbot is a pending unrestricted free agent while Rittich appears to have lost his confidence.

The Flames have a collection of promising youngsters including forwards Dillon Dube and Andrew Mangiapane, along with defenceman Rasumus Andersson. But is time running out in Calgary for centres Sean Monahan and Sam Bennett?

Perhaps most importantly, will general manager Brad Treliving remove the "interim" tag from Ward's title? Will the ill-fated call to pull Talbot affect that decision?

So many questions linger after a campaign of turmoil for Calgary. From the terrifying collapse of defenceman T.J. Brodie at practice, to the dismissal of former head coach Bill Peters for racist comments during his time in the American Hockey League, nothing was easy for the Flames.

Still, they had their chances. Even with forward Matthew Tkachuk out with a suspected concussion, the Flames came within 12 seconds of taking a commanding 3-1 series lead in Game 4.

WATCH | Geoff Ward doubles down on decision to pull Talbot: 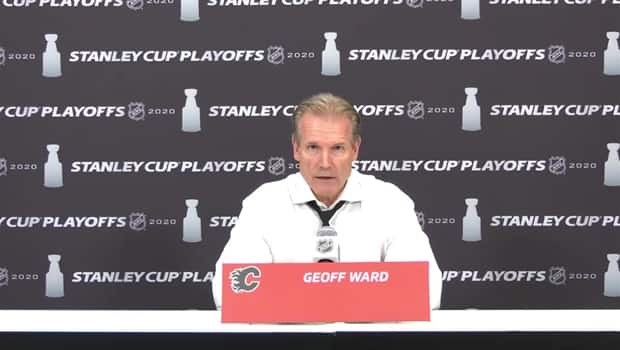 2 months ago
14:35
Calgary Flames head coach Geoff Ward was quick to defend his decision to pull goaltender Cam Talbot during his team's 7-3 game 6 loss to the Dallas Stars. 14:35

Joe Pavelski scored with 11.9 seconds on the clock night to send the game into overtime. (Alexander Radulov registered the game winner on the 62ndshot  for Dallas.)

Talbot was the reason the Flames could compete in this series with the Stars. When Ward pulled him in Game 6, that reason was gone.

It's no wonder Talbot needed time to compose himself in the team room Thursday night away from the television cameras.

"I didn't want to show my emotions on the bench," he said. "I tried to remove myself from the situation and not project that on anybody else, because we still had a chance to win the hockey game."