Ondrej Palat scored at 4:40 of overtime as the Tampa Bay Lightning defeated the Boston Bruins 4-3 on Tuesday to even their second-round playoff series 1-1.

His team gave up a goal he felt shouldn't have counted three minutes into the first period and had a subsequent equalizer called back on a razor-thin offside.

Down 1-0 in the series and playing well, Tampa Bay then grabbed its first lead in more than 110 minutes of action midway through the third period only to see Boston tie it up with under four minutes to go in regulation.

"If you want to have any chance of winning and going deep in the playoffs, adversity strikes in the weirdest ways," Cooper said. "And you never know when it's going to happen.

"Sometimes you're just dealt ... a sandwich that doesn't taste very good, if you know what I mean." 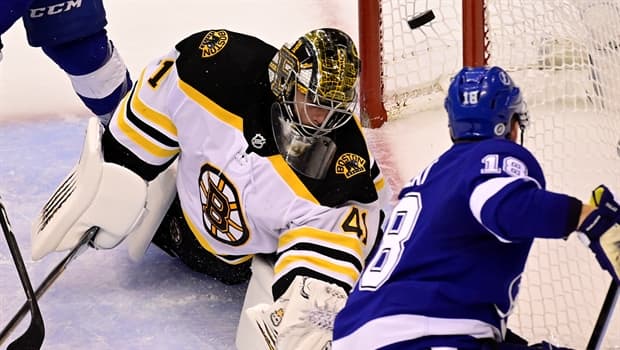 And deal with it they did.

Ondrej Palat scored at 4:40 of overtime as the Lightning defeated the Bruins 4-3 to even their second-round playoff series 1-1.

Blake Coleman added two goals and Nikita Kucherov had the other in regulation for the Lightning, who got 22 saves from Andrei Vasilevskiy.

"If there was one message that was going on it was we liked everything that was going on about the game," Cooper said. "I know it sounds so cliche, but we just had to stick with it. Some teams, if you have mental weakness at all, you're probably sitting there saying, 'Poor us.'

"But it's just not been this group. That's not how they operate." 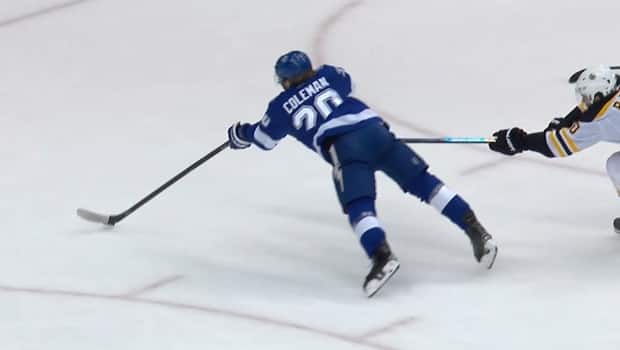 2 months ago
2:53
In his daily recap, Rob Pizzo breaks down the bounce back games from the Canucks and the Lightning, and gets you set up for today's action. 2:53

Brad Marchand buried his second of the game to tie things with under four minutes left in the third period for the Bruins, while Nick Ritchie also scored. David Pastrnak added two assists for Boston, which got 36 stops from Jaroslav Halak.

The teams don't have much time to digest the result, with Game 3 of the best-of-seven matchup set for Wednesday at 8 p.m. ET back inside the fan-less Scotiabank Arena.

Tampa, which beat the Columbus Blue Jackets in quintuple overtime of Game 1 in the opening round before closing out the series in the extra period of Game 5 on a goal from Brayden Point, got the winner after Boston couldn't clear the zone.

Palat jumped on a puck at the side of the net off a scramble to score his first of the post-season and send the Lightning pouring off their bench in celebration.

"It's obviously big-time frustrating any time you lose a game and especially in that fashion," Bruins centre Sean Kuraly said. "We thought we were trending in the right direction, [thinking] momentum may be swinging our way. You get the puck close to the blue line a couple times and you don't get it out, and against a good team that's what happens.

"It ends up in the back of your net."

Acquired prior to February's trade deadline from the New Jersey Devils, Coleman gave Tampa its first lead of the series at 10:40 of the third after taking a stretch pass from Victor Hedman. The Lightning centre moved in alone on Halak and snuck an off-speed shot through the five-hole after getting slashed by Bruins defenceman Connor Clifton.

Boston, however, responded with 3:58 left in regulation when Marchand finished off a pretty passing play. With the Bruins in the middle of a change — Patrice Bergeron would normally be on the ice — Kuraly took a pass from Pastrnak and quickly fed Marchand to bury his sixth and knot things up.

"Any time there's a mishap, you just turn the page," Cooper said of his roster. "It was needed tonight, I'll tell you that, because they need to be rewarded for the work they were doing.

Boston, which triumphed 3-2 in Game 1 on the back of Halak's 35-save performance and Marchand's winner, took a 2-1 lead with 5:27 left in the second on a power play. Pastrnak faked a one-timer before sliding a pass to Marchand at the side of the net.

Tampa responded 56 seconds later after some great work from Point. The diminutive centre twisted and turned in the Bruins zone before finding Kevin Shattenkirk, whose shot was tipped in by Kucherov for his third.

The Lightning dressed seven defencemen with Ryan McDonagh (undisclosed), who has averaged a team-high 26:07 of ice time in the post-season, out injured after leaving midway through the third period of Game 1. Veteran blue-liners Luke Schenn and Braydon Coburn drew in, while Carter Verhaeghe was scratched up front.

Boston owned the best record in the NHL when the league suspended its season because of the COVID-19 pandemic in March, but dropped to the No. 4 seed in the Eastern Conference after losing all three of its games in the round-robin portion of the restart.

The Bruins found their groove in the first round of the usual 16-team playoff bracket before disposing of the Carolina Hurricanes in five games.

Tampa, meanwhile, had the second-best mark in the East and was fourth overall when the schedule was halted. The Lightning finished second in the round-robin and then downed Columbus.

The Bruins jumped out to a 1-0 lead at 3:14 of Tuesday's first period after Tampa defenceman Zach Bogosian's stick disintegrated at the offensive blue line. Boston broke the other way, with Ritchie collecting an Anders Bjork rebound off the end boards and stuffing his first past Vasilevskiy, who thought he had the puck covered.

The Lightning responded a couple minutes later when Barclay Goodrow tipped Coburn's point shot up and over Halak. The Bruins, however, correctly challenged for offside after Point was a fraction of a second too slow exiting the Boston zone on the tag up.

Cooper fired a number of expletives at the officials when the play was reversed, but was back smiling on the bench after a surprising burst from an unlikely source finally knotted the score.

Bogosian, a bruising defenceman known more for physical play in his own end, burst up the ice, split two Boston defenders, and as he was getting knocked down fed a diving Coleman, who slid his second past Halak before crashing into the net at 12:42.

"I saw Bogo picking up some speed," Coleman said. "He just kind of had that look in his eye like he was about to do something. I just made it a point to get up into play with him, try to give them an option.