Nazem Kadri had two goals and an assist, Philipp Grubauer stopped 14 shots and the Colorado Avalanche overwhelmed the Arizona Coyotes 7-1 Monday to take a 3-1 lead their first-round playoff series.

The Colorado Avalanche scored three early goals, revved up their power play and hit Arizona with a barrage of odd-man rushes.

Their defence closed in around goalie Philipp Grubauer, shut down the Coyotes' shooting lanes.

Dominating in all aspects, the Avalanche are now within one win of advancing in the Stanley Cup playoffs.

Nazem Kadri had two goals and an assist, Philipp Grubauer stopped 14 shots and the Avalanche overwhelmed the Coyotes 7-1 Monday to take a 3-1 lead their first-round playoff series.

"We had a real good night tonight," Avalanche coach Jared Bednar said. "We had some real good individual efforts and guys capitalized on their chances."

WATCH | Avs' Makar makes it 5-1 with a beautiful individual effort: 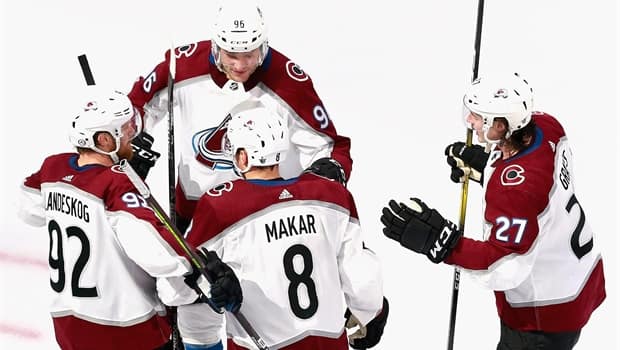 Cale Makar dazzles as Avalanche cruise past Coyotes in Game 4

2 months ago
0:54
Cale Makar was one of six Avalanche players to find the back of the net in their 7-1 victory against the Coyotes in game 4. 0:54

The Avalanche jumped on Arizona after losing 4-2 in Game 3, scoring three first-period goals, two by Kadri on the power play.

Matt Calvert, Cale Makar and Mikko Rantanen each had a goal and an assist. Matt Nieto and Joonas Donskoi also scored. Grubauer was sharp after Pavel Francouz started Game 3.

A complete all-around game in the Edmonton bubble puts Colorado, the No. 2 seed in the Western Conference, in position to clinch the series in Game 5 on Wednesday.

"We had so many chances in Game 3 and obviously couldn't get the puck in the net," said Colorado forward Nathan MacKinnon, who had two assists. "It was nice to see us get that early one and we just kept going from there."

Kuemper gave up four goals on 22 shots before being replaced by Antti Raanta in the third period and Jakob Chychrun scored for the Coyotes, who were held to 15 shots.

'It was men against boys'

Coming off a big win in Game 3, the Coyotes are now one game from having their playoff bubble popped.

"I can't tell you one player who played well today. We were embarrassed," Coyotes coach Rick Tocchet said. "It was men against boys today."

Arizona played its rope-a-Yote style to near perfection to win Game 3, absorbing Colorado's near-constant pressure and counterattacking when the opportunities arose.

Kuemper made it work, stopping 49 shots for the second time this post-season, and the Coyotes blocked 27 shots in front of him.

Arizona wanted to be more aggressive offensively, as it was in Game 2, but Colorado had the game's first six shots and scored late in the first period when a Coyotes turnover led to an odd-man rush. Nieto scored it by angling his skate to knock the puck past Kuemper on a feed from Calvert.

Colorado kept up the pressure, leading to Arizona's third penalty in the opening period. The Avalanche converted on the power play, going up 2-0 on Kadri's rebound two minutes after Nieto's goal.

Kadri scored again on a power play in the closing seconds of the first period, punching in a rebound after the Coyotes allowed MacKinnon an open rush at Kuemper.

"It's not good enough to come out like that when it's a 2-1 series," Coyotes captain Oliver Ekman-Larsson said.

Donskoi made it 4-0 midway through the second period on another odd-man rush, one-timing a pass from Andre Burakovsky past Kuemper's glove side.

Arizona finally showed some signs of offensive life, scoring its first power-play goal of the series on a wrist shot by Chychrun from the right circle.

Raanta, who had been out since Game 2 against Nashville, replaced Kuemper to start the third period and gave up a goal 19 seconds in. Makar, a Calder Trophy finalist, shook defenceman Alex Goligoski with a nifty move and beat Raanta stick side to make it 5-1.

"That was an amazing and what made it more amazing was how easy he made it look," Nieto said.

The same thing could be said about Colorado's entire roster in Game 4.