The Montreal Canadiens appear to be on the upswing. But, as was the case in recent seasons, whether or not they will advance to the playoffs will depend on the play of their prized goalie Carey Price.

Montreal will be a compelling story, but the post-season remains elusive

To prepare you for the opening of NHL training camps in mid-September, CBC Sports will do a deep dive on each of the seven Canadian-based clubs every Thursday. The Montreal Canadiens are examined in the fifth installment.

The Canadiens appear to be on the upswing. But, as was the case in recent seasons, whether or not they will advance to the playoffs will depend on the play of their prized goalie Carey Price.

He almost dragged the Habs into the post-season last spring. However, Montreal's 96 points — a total that matched the record for a non-playoff team set by the 2017-18 Florida Panthers — fell two points short of the eighth and final playoff spot in the East, held by the Columbus Blue Jackets.

The Canadiens pushed themselves into late contention with a 7-2-1 finish but lost a critical outing 6-2 in Columbus in Game No. 78. It was the third time in four years the Canadiens found themselves on the sideline as the chase for the Stanley Cup commenced.

Like every team, there was a bunch of what-ifs for Montreal. What if it had a capable backup for Price? Antti Niemi was a bust. What if Shea Weber (24 games), Paul Byron (23) and Andrew Shaw (19) didn't miss extended time because of injuries?

What if the Canadiens performed better on the power play? They were 30th in man-advantage situations. They continued to flounder when Weber and his big shot returned to the lineup as he scored only two power-play goals after the all-star break.

General manager Marc Bergevin, whose Habs have made the playoffs in four of his eight seasons while he's been at the helm, had a middling off-season. But his scouting staff has compiled an impressive pack of prospects.

The big three who will push for a position on the Habs roster in training camp will be forwards Nick Suzuki, Ryan Poehling and defenceman Noah Juulsen. 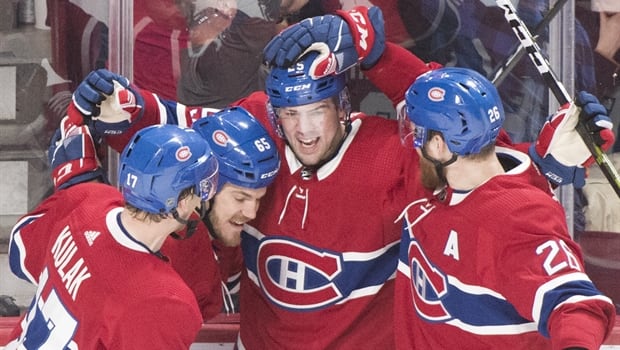 2 years agoVideo
3:34
Ryan Poehling scored a hat-trick and the shootout winner for the Montreal Canadiens in a thrilling 6-5 win for the Habs in their season finale. 3:34

Meanwhile, the front-loaded five-year $42.27-million US offer sheet to 22-year-old Carolina Hurricanes restricted free agent Sebastien Aho was a failure. It was worth a shot, but after the Hurricanes matched the offer, it left the Canadiens demanding fan base wanting another massive summertime move that never arrived.

Instead, Bergevin traded Shaw back to the Blackhawks with a seventh-round pick in 2021 in exchange for a 2020 second-round selection, a 2020 seventh-round choice and a 2021 third-round pick.

The Habs surprised plenty of hockey people last season. They're a small group, but what they lack in size they made up for in a competitive, ultra-quick team with a balance of skill, speed and versatility among their top-nine forwards.

They have an element of internal competition for ice time on a nightly basis. But whether there is further maturation from players such as Jesperi Kotkaniemi, Jonathan Drouin, Max Domi, Charles Hudon, Artturi Lehkonen and defenceman Victor Mete will be a significant factor in this team taking the next step.

Another intriguing part of the Habs story this season will be whether Bergevin dips into his deep prospect pool to land a top-six forward or top-four defenceman to take a step toward being a contender.

Besides the aforementioned Suzuki, Poehling and Juulsen, other top prospects within the organization include forwards Jesse Ylonen, Joni Ikonen, defenceman Josh Brook, goalie Cayden Primeau as well as 2019 first-round pick Cole Caufield, who will be a freshman at the University of Wisconsin.

Yes, the Habs will be a compelling story this season.