Habs brush aside Leafs with 3 goals in final period

Two breakaway goals by Jonathan Drouin gave the Montreal Canadiens a 5-2 victory over the Toronto Maple Leafs on Saturday night.

The Maple Leafs simply ran out of steam.

Toronto gave up two breakaways, an odd-man rush and three goals in the third period of a 5-2 loss to the Montreal Canadiens on Saturday night.

The Leafs were playing the second game of a back-to-back after defeating the San Jose Sharks 4-1 on Friday.

"You can't give up two breakaways and a 2-on-1 with the game that close," said Auston Matthews, who had one assist on the night. "They obviously capitalized on their opportunities. We just have to find a way not to give those opportunities up. Maybe then it's a 3-2 or a 2-2 game in the third period and we're battling.

"We didn't necessarily take our foot off the gas, but a couple of mental errors that they capitalized on. You just can't do that."

A second-intermission pep talk must have fired up the Canadiens because they scored three times in the third period to break a 2-2 deadlock.

Joel Armia scored seven seconds into the frame, off a Leafs face-off win, by poking the puck around a flat-footed Jake Muzzin and beating backup Michael Hutchinson blocker side for his team-leading sixth of the year. 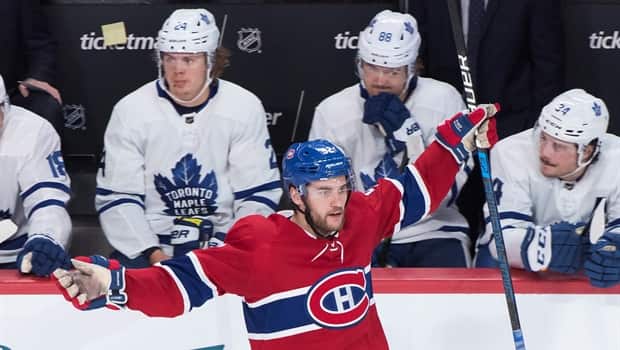 1 year agoVideo
1:29
Montreal outplayed Toronto for most of this one getting key saves from Carey Price and a pair of nice goals from Jonathan Drouin. 1:29

Jonathan Drouin made it 4-2 for Montreal on his second breakaway goal of the night at 7:40 off a giveaway by Tyson Barrie at the blue line.

Nick Suzuki put the game to bed with his third goal of the season on a 2-on-1 with Nate Thompson at 11:53.

"You don't get all that many of them," said Brendan Gallagher of breakaways and odd-man rushes. "We were pretty fortunate. Those are big goals. Those opportunities don't come without good, smart plays and hard work. Those guys worked for those opportunities and made the most of them."

This was the second of four contests between the Canadiens (5-4-2) and Leafs (6-5-2) this season. Montreal also beat Toronto 6-5 in a shootout on Oct. 5 — another second game in two nights for Mike Babcock's men.

The Maple Leafs dropped to 0-3-1 in the second game of back-to-backs.

"We've played a lot of hockey but I don't think we can talk about back-to-backs at this point in the season," said Babcock. "The first week is a different thing, but now you have to find ways to win these games.

"Obviously there's a reason why teams aren't as good in the second game. But they're on your schedule, so what are you going to do about it? We just happen to be unfortunate because we've had four in October."

The Maple Leafs showed signs of fatigue from the get-go, as the Canadiens ran rings around them in the first period and jumped out to an early 2-0 lead.

Gallagher put Montreal in front at 7:43 after breaking away from Cody Ceci's loose coverage in front of goal. The first-line winger cut to the net and cashed in Tomas Tatar's backhand pass for his fifth of the season.

Montreal doubled its lead through Drouin's first breakaway goal at 12:34 on a beautiful backhand saucer pass by Armia from his blue line. Hutchinson, who made 33 saves on 38 shots, got a piece of the puck but not enough.

For the eighth time this season, the Canadiens conceded a goal in the final minute of a period when Muzzin beat Carey Price with 16 seconds left in the opening frame — Toronto's first shot in more than 11 minutes.

The equalizer came 5:52 into the second. With Montreal unable to control a loose puck in front of goal, Andreas Johnsson flipped it over Price's pad for his third of the season.

"It's easy to play these games, Saturday night against the Leafs," said Drouin, who has 10 points this season. "We had a lot of energy, clicked in certain areas. The Armia goal in the third period was huge. That one hurt them."

Typical of an encounter between the rivals, there was bad blood between Max Domi and Alexander Kerfoot, who traded words, slashes, big hits and even punches throughout the night.