The Montreal Canadiens' recent eight-game slide certainly shone a light on the team's deficiencies and if there is one thing most fans can agree on it's that there are many. But where the debate rages is how general manager Marc Bergevin should address them, and at the centre of that debate is the team's first-round pick in next June's draft.

Should the team trade to get better now? Or stockpile and build for the future?

Perhaps there is nothing better than a losing streak to put into focus what parts a team is missing in order to succeed.

The Montreal Canadiens' recent eight-game slide certainly shone a light on the team's deficiencies, and if there is one thing most fans can agree on it's that there are many. But where the debate rages is how general manager Marc Bergevin should address them and at the centre of that debate is the team's first-round pick in next June's draft.

In one camp you have fans who are more than willing to see Bergevin trade it to get a player who can help the Habs win now.

Their argument is that the team has already invested heavily in veterans such as defenceman Shea Weber and goaltender Carey Price, so why not try to do everything possible to win while they are still in their prime years?

Adding a player such as New Jersey forward Taylor Hall, who is in the final year of his contract and is rumoured to be available, would certainly help the Habs' chances of winning.

But on the other side are those who believe the draft pick is too valuable to let go.

"I think it's one of the more promising draft classes," NHL scout Grant McCagg said this week. "It's quite deep and every position has some elite, elite players. It looks like any team that misses the playoffs this year gets a heck of a consolation prize."

WATCH | Canadiens defeat Penguins for 2nd win in a row: 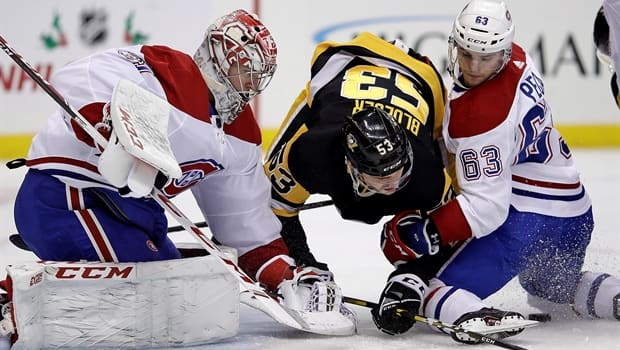 Building through the draft might be the consensus smart move for any team, but Bergevin might no longer have the luxury of taking a big-picture approach.

The Habs have missed the playoffs in three of the past four seasons and the joke around town is that Bergevin is in year eight of his five-year plan to turn them around.

The pressure to win is mounting and there is a feeling that if they don't get to the playoffs he might not be around to make next year's pick, let alone be around to see that pick mature into an NHL player.

Yet even if Bergervin wanted to move the pick, the fact that Montreal is host of the 2020 draft complicates things.

"You're hosting the draft, you gotta put on a show," McCagg said.

The draft is split up into two days. On day one the first round is in the spotlight and there is wall-to-wall coverage of each pick. The rest of the draft rolls out on day two and draws much less attention. So hosting the draft without a pick in the first round would be a letdown for local fans who will pack the Bell Centre with the anticipation of seeing their team select its potential next star player.

That is, if you trust the Habs to make a good pick at home. Some fans don't based on what happened the last time Montreal hosted the draft in 2009.

That year the Habs selected a local player — Louis Leblanc from Pointe-Claire, Que. — with the 18th pick overall. While scouts had him highly rated, he never developed into an everyday NHLer and some fans point to this as evidence that the team buckled to pressure from the local media to pick a player who spoke French.

But McCagg — who was a part-time scout for the Habs when Leblanc was selected — doesn't think that history should be a concern.

"I didn't mind the Louis Leblanc pick; there weren't many scouts that said 'that's a terrible pick' at the time," McCagg said. "So we can sit back and say, 'oh they only picked Louis Leblanc because he was French,' but that's actually false."

Additionally, McCagg doesn't think the Habs need to entertain putting the 2020 first-rounder on the trading block because the team has plenty of assets it could use to make a deal instead.

"They have a pile of picks in the rest of the draft and they have some great prospects in the pipeline."

GMs around the league are well aware that the 2020 draft promises to be deep with talent. So as the trade deadline approaches the value for a first-rounder from a team that might not make the playoffs will only increase.

The Habs' recent resurgence after dropping eight games has also cooled the feeling of urgency to make a move immediately to improve the team. Still, what Bergevin ultimately does with this pick will tell fans a lot about what he thinks of his team now and how secure he feels in his job moving forward.

Douglas Gelevan is a national award-winning journalist who has been a member of the CBC team since 2010. In addition to his role as host of CBC Montreal Weekend News, Doug also covers community sports and sports news.