Montreal's Brendan Gallagher has heard the doubters most of his hockey life, but true to his trademark smile, the Canadiens forward chooses to focus on the folks who breathe positivity into his life.

'He drags his teammates to the fight. That's what Brendan Gallagher is all about'

Anger serves as rocket fuel for athletes in every sport. The aggrieved remember the cruel remarks — about their size, their talent, their work ethic — and channel those slights onto the field of play.

For Montreal Canadiens right winger Brendan Gallagher, the opposite is true. Oh sure, he heard the doubters over the years — the ones who figured the scrappy winger simply couldn't make it to the National Hockey League due to his five-foot-eight, 184-pound frame.

True to his trademark smile, Gallagher chooses to focus on the folks who breathe positivity into his life.

"People say they get motivation from people saying you're too small or you can't do that," Gallagher said during Montreal's current road swing through Western Canada. "That's never really affected me in one way or the other. There's been so many people who have helped me along the way, I take a lot of pride in making sure that their belief goes somewhere.

"They put a lot of trust in me, a lot of belief in me, and I just want to make sure that I'm proving them right rather than proving the naysayers wrong."

Regardless of his motivation, Gallagher proves the naysayers wrong on a nightly basis through hustle, drive and determination. The 27-year-old from Edmonton is a virtual case study for undersized players with big dreams.

Tapped by Montreal in the fifth round (147th overall) of the 2010 NHL entry draft, Gallagher represented Canada at the 2012 world junior championships in Edmonton and Calgary.

At the time, he appeared to be a long shot to actually play in the NHL because of his size and draft pedigree. Still, even as a teenager, he carried himself with the poise of a veteran — collecting three goals and six points in a tournament where Canada settled for bronze.

Somewhere tucked in the back of his closet are the ceremonial cowboy hat and belt buckle he received from tournament organizers upon touching down in Calgary.

"I still have those," Gallagher said. "I don't wear them all that much. Can't really find an excuse. I can't really pull it off."

Perhaps he can't pull off the cowboy hat on Crescent Street — hey, not many can — but Gallagher is a favourite son in Montreal. He thrives under the relentless scrutiny of playing in a city where cheering for the local hockey team feels more like religion than sport.

Gallagher reports to work daily in the hard places along the boards and the high-punishment real estate in front of the net. He is routinely cross-checked and battered around by men who tower over him.

And he routinely scampers to his feet with a smile on his face.

"I guess my growth spurt might still come," Gallagher said. "But you try and get better at other aspects of the game and do what you've always done.

"I've always been a responsible player, I've always found ways to contribute just trying to do the same things regardless of what level you're playing at." 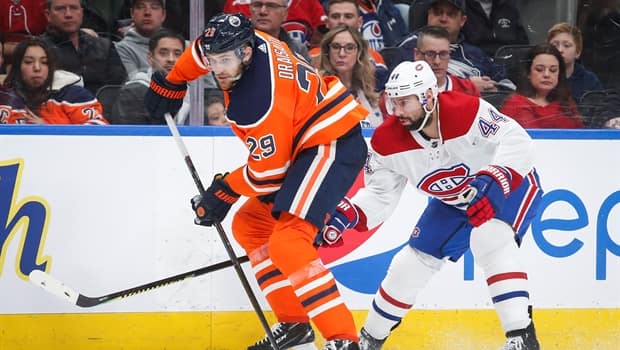 1 year agoVideo
1:47
Connor McDavid and Leon Draisaitl each had two points to power the Edmonton Oilers past the Montreal Canadiens 4-3. 1:47

From Marc Bergevin's perch in the press box, the Canadiens general manager simply appreciates knowing what No. 11 brings, no matter the opponent.

Montreal defenceman Brett Kulak is just one of the teammates Gallagher drags into the fight with his scrappy net-front presence and dogged perseverance on the forecheck.

"He brings it every shift," Kulak said. "That's the way he's wired. And he's really skilled player. It's not just like he's a gritty player with choppy hands. He's a goal scorer. He gets his nose over the puck."

Indeed. Gallagher leads the Canadiens in goals (15) and sits third in team scoring with 28 points. He is signed through 2020-21 with an annual cap hit of $3.75 million US.

"I've had so many good people around me," Gallagher said. "So many supportive people along the way — obviously, my parents and coaches and teammates. They give you that belief factor and for me it hasn't really been about proving people wrong — people that have said I'm too small wrong. It's proving to the people that supported you and believed in you right, and that's really kind of what's motivated me.

"I enjoy what I do, I have fun with it. I understand I'm not going to grow. That part I can't change."

Clearly, he doesn't need to.