Lou Lamoriello of the New York Islanders is the winner of the Jim Gregory general manager of the year award.

The league announced Saturday night that Lamoriello finished ahead of fellow finalists Julien BriseBois of the Tampa Bay Lightning and Jim Nill of the Dallas Stars. Colorado's Joe Sakic was fourth and Vegas' Kelly McCrimmon fifth in voting by GMs, league executives and media members after the second round of the playoffs.

Lamoriello's Islanders are in the Eastern Conference final thanks to several moves he made in free agency in the summer of 29 and at the February trade deadline. The 77-year-old signed free agent goaltender Semyon Varlamov and forward Derick Brassard traded for centre Jean-Gabriel Pageau and defenceman Andy Greene.

"We've had tremendous results from our players throughout this playoff series," Lamoriello said. "All you have to do is just go up and down the stat sheet and look at the different types of players and different positional players who've come forward and been a key part of winning, and that's just great to see. That's how you win: When you have a team that there's a different player each and every night that can come forward and players being happy for each other."

Varlamov is 10-5 with a 2.26 goals-against average and .913 save percentage in 16 starts in the playoffs. Pageau, who Lamoriello signed to a $30 million, six-year extension as part of the agreement to acquire him from Ottawa, is tied for fifth in the post-season with eight goals. 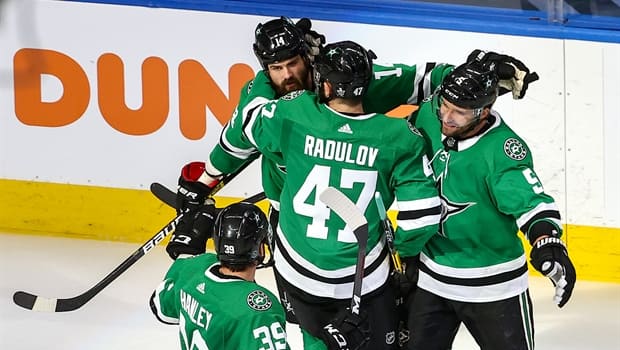 1 month ago
3:07
In his daily recap, Rob Pizzo breaks down why game 3 of the Western Conference final had the Stars laughing afterward.  3:07

Greene, who Lamoriello signed as an undrafted free agent with New Jersey, has become a regular part of New York's blue line after replacing injured defenceman Johnny Boychuk in the preliminary round. Brassard has eight points in 15 games.

"Lou has been in the game a long time," Trotz said. "[He] understands the person really well. It's not necessarily can he shoot a puck, can he pass a puck. There's the other stuff. And that's where I think Lou's been really exceptional at when he looks at certain people."

Lamoriello called adding Greene and Pageau "probably the smoothest transactions that I've ever had bringing two players in at that time of the year."

"They've done everything that we've hoped them to do and probably more," Lamoriello said. "Both of them just came into the organization like they've been here before. Their acceptance has just been so smooth that I really have a difficult time putting it into words.

Lamoriello, 77, is a first-time winner of the award that was first handed out in 2010 and this season has been renamed for Gregory, a longtime league fixture who died in October.

He's in his second season in charge of the Islanders following three years with the Toronto Maple Leafs. Lamoriello hired Trotz fresh off the coach winning the Stanley Cup with Washington and the Capitals letting him go, then watched captain John Tavares leave for Toronto in free agency.

New York has made the playoffs — and won a round each time, unlike Tavares — each of the past two years. Trotz credits the old-school Lamoriello for helping establish a strong culture for an organization that hasn't won the Stanley Cup since doing so four times in a row in the early 1980s.

The Islanders reached the conference final round for the first time since 1993. If they go on to win the Cup, it'll be a fourth title for Lamoriello, who won three times with New Jersey.