James Neal had a pair of goals and Connor McDavid had a goal and three assists as the Edmonton Oilers won their second in a row to start the season, defeating the Los Angeles Kings 6-5 in an offensive slugfest on Saturday.

The summer trade for James Neal has already paid dividends for the Edmonton Oilers.

Neal had a pair of goals and Connor McDavid had a goal and three assists as the Edmonton Oilers won their second in a row to start the season, defeating the Los Angeles Kings 6-5 in an offensive slugfest on Saturday.

Coming over from the Calgary Flames in a trade for Milan Lucic after a disaster of a season that saw the perennial 20-goal scorer record just seven, Neal said he feels refreshed in his new situation with the Oilers.

"I felt like I had a great summer, felt like it was a fresh start, felt I was in a great position," he said. "I felt good coming into camp. I was confident in my game and knew that I'd get a chance to play with some good players and that's all you can ask for." 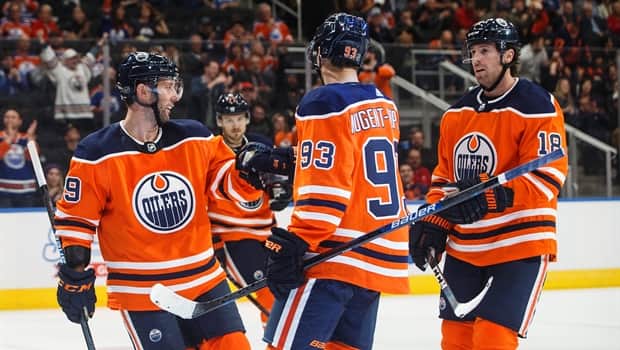 1 year ago
1:01
James Neal scored his first 2 goals with Edmonton while Connor McDavid registered 4 points in the Oilers 6-5 win over the LA Kings. 1:01

"It's good to see him get a couple of goals," he said. "I like the way he roots around down there on the power play and finds stuff. It was a good game by him."

"You can't give up six goals and expect to win the game, that's not going to happen very often," Kopitar said. "Obviously scoring five goals that's encouraging, but at the same time, we have to clean up on the defensive side of things and make sure that six was just a case of first game of the season."

The Oilers got a bit of a fluke goal just 53 seconds into the opening period as McDavid muscled his way through the middle and sent a centering pass that deflected off of Los Angeles defenceman Matt Roy and past goalie Jonathan Quick.

The Kings got a gift goal of their own three minutes later as Edmonton goalie Mike Smith got caught wandering and coughed the puck up to Kopitar, who sent it to Brown to deposit into the empty net.

Smith was victimized again five minutes later, losing a battle behind the net to Kyle Clifford, who fed it in front to Lewis for the goal.

Edmonton tied the game back up on the power play just over a minute later as Neal scored his first as an Oiler, sending a rebound on the doorstep through Quick's legs.

The Kings went back up with five minutes to play in the first when Kopitar tucked the puck under Smith's arm, giving L.A. three goals on six shots.

The Oilers knotted the game back up again five minutes into the middle frame as Kassian finished off a three-way passing play for his second of the season.

Los Angeles made it 4-3 when Amadio showed deft hands, batting a puck out of the air and into the net.

Edmonton tied the game back up five minutes into the third as Gaetan Haas banked a pass off the side of the net to Nygard for his first career NHL goal.