Mitch Marner was stuck on six goals for nearly a month.

Now the red-hot winger can't stop putting the puck in the net.

Marner scored twice in the third period as the Toronto Maple Leafs defeated the New York Rangers 5-3 on Saturday night.

The 21-year-old was originally credited with another goal eventually given to Andreas Johnsson, which prompted fans at Scotiabank Arena to litter the ice with headwear for a second consecutive hat trick that wasn't. Marner scored late in Thursday's 6-1 spanking of the Florida Panthers — a goal that some in the crowd thought was a third for John Tavares.

"People are losing their hats for no reason here. ... I feel pretty bad for them," said Marner, who recorded the fourth two-goal game of his career. "If they're Leaf hats I'm guessing they're not cheap. Everything around here is pretty expensive.

Marner had 16 assists during a 13-game goal drought that stretched from Nov. 16 to Dec. 13, but has now scored six times and set up two more in his last four outings.

"Every night he's one of our best players, if not the best player," Leafs head coach Mike Babcock said. "He works real hard, he's real good defensively, he does it right.

Morgan Rielly, with and goal and an assist, and Patrick Marleau also scored for Toronto (24-10-2), while Frederik Andersen made 25 saves. Tavares and Johnsson, who recorded the second three-point game of his career, each had two assists as the Leafs won their third straight.

Babcock announced following the victory that fourth-line winger Tyler Ennis, a pleasant surprise with seven goals and four assists in 33 games this season, suffered a broken ankle midway through the second period.

"We've only got 11 forwards so we'll have to do something," said Babcock, whose team hosts the Detroit Red Wings on Sunday before the NHL's Christmas break.

Watch highlights of Toronto's win over the New York Rangers: 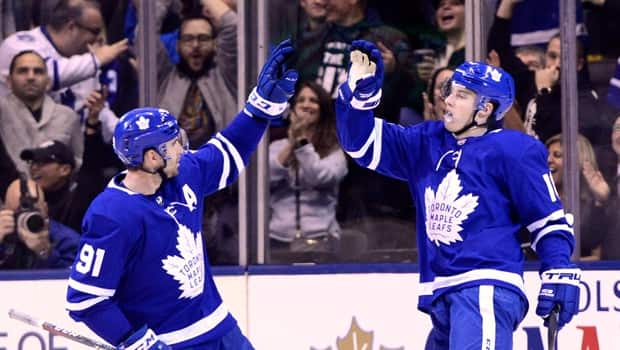 2 years ago
2:07
Mitch Marner had two goals and an assist, as the Toronto Maple Leafs beat the New York Rangers 5-3 for a third straight win. 2:07​

Neal Pionk and Kevin Hayes, with a goal and an assist each, and Chris Krieder replied for New York (15-14-5). Alexandar Georgiev made 31 saves as the Rangers dropped to 1-2-2 over their last five.

"They've got some pretty skilled guys," New York defenceman Marc Staal said. "We've just got to learn from our positives."

Johnsson snapped a 1-1 tie at 1:37 of the third on a goal originally credited to Marner. Georgiev stopped an initial tip by Tavares, but the rebound squirted out to Marner, whose shot deflected in off Johnsson.

Rielly, who leads all NHL defencemen with 42 points this season, made it 3-1 at 5:26 when he took a pass in the slot from Johnsson and fired his 12th shortside. Johnsson was promoted to Toronto's top line alongside Marner and Tavares on Thursday with Zach Hyman (ankle) out at least three weeks.

New York got back within one just 1:12 later when Filip Chytil made a nice move between his own legs to step around Rielly before Hayes shovelled his 10th past Andersen.

Marner put Toronto back up by two at 12:53 on a slick forehand deke to beat Georgiev for his 11th following a behind-the-back feed from Tavares.

Krieder got one back for New York on a deflection at 16:19 that made it 4-3, but Marner scored into an empty net with 19.2 seconds to go as fans mistakenly threw hats on the ice for a second straight night.

"There was a lots of good things," Rielly said of Toronto's effort. "We stuck with it."