The Toronto Maple Leafs expected Nazem Kadri to be suspended a game or two for his hit on Tommy Wingels in the 5-1 loss that opened their first-round playoff series with the Boston Bruins.

Toronto forward will sit 3 games for hit in series opener; Game 2 at 8 p.m. ET on Saturday

The Toronto Maple Leafs expected Nazem Kadri to be suspended a game or two for his hit on Tommy Wingels in the 5-1 loss that opened their first-round playoff series with the Boston Bruins.

The three-game ban, however, caught them off guard.

"Yeah, for sure," Leafs head coach Mike Babcock said Saturday morning when asked if he was surprised by the length of the suspension.

Kadri drove Wingels, who had fallen to his knees, into the boards moments after the Bruins forward caught Toronto's Mitch Marner with an elbow midway through Thursday's third period.

"Naz feels like a big brother to this team," Marner said. "He's a guy that plays the game with a lot of passion. He's a protector out there."

Assessed a major penalty and a game misconduct, Kadri pleaded his innocence afterwards.

But the NHL's department of player safety came down hard less than 24 hours later, calling the play "a forceful and illegal hit delivered on a defenceless opponent for the purpose of retribution and message-sending."

"We expected ... a game out of it," Babcock said. "Adversity you face in the playoffs, if you're going to have a long run, is always there. There's not much you can do about it.

"Let's just get on with it. We went without a number of centres this year. Let's play."

Wingels missed practice Friday, but took part in the Bruins' morning skate and could play in Saturday's Game 2.

"Didn't like the hit," Wingels said. "I was in a vulnerable spot, and I think as a game, as a league, as players, that's the stuff we don't want in our game." 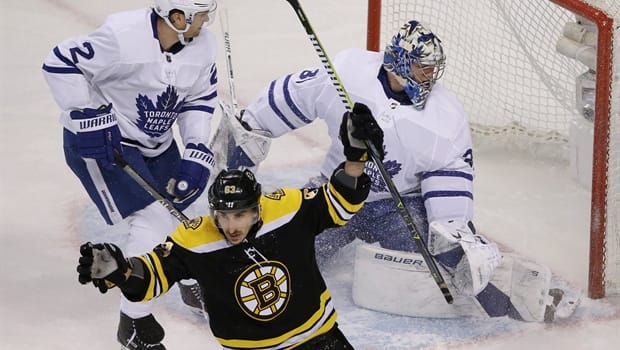 The fourth suspension of Kadri's career will see him miss the rematch at TD Garden, as well as Games 3 and 4 on Monday and Thursday when the series moves to Toronto's Air Canada Centre.

"Obviously a little bit surprised," Leafs winger James van Riemsdyk said of the ban. "But at this point it's just a waste of energy thinking about that."

With Kadri on the sidelines, the Leafs are expected to slide Patrick Marleau from the wing to centre on the second line, with Zach Hyman taking up the veteran's usual spot opposite Marner.

Komarov moves up to 1st line

Leo Komarov will start on the first line alongside Auston Matthews and William Nylander in Hyman's old slot, while rookie Andreas Johnsson appears set to make his playoff debut on the fourth line with Tomas Plekanec and Kasperi Kapanen.

"He's got good speed, good skill," Babcock said of the Swede. "Ideally he saw the game the other night so he now has a handle of what's going on and how competitive you have to be at playoff time to be a good player."

The Leafs will be looking to stay out of the penalty box Saturday after giving up three goals on six man-advantage opportunities in Game 1.

"No. 1, let's be disciplined," Babcock said in listing off what Toronto needs in order to earn a split. "You can't be in the box. No. 2, our compete level right through our group ... you've got to have everybody.

"Competitiveness, on the puck, winning 50-50 battles, races, wall battles, net battles — that's got to be our priority."