Tyson Barrie had a goal and an assist in his return to Colorado, leading the Toronto Maple Leafs to a 5-3 victory over the Avalanche on Saturday night.

Toronto's Tyson Barrie has goal, assist in return to Colorado

A quick goal by Colorado got Tyson Barrie's homecoming off to a rough start, but Toronto's dominating stretch helped him celebrate in his return to Denver.

Barrie had a goal and an assist during a four-goal burst in the first period, leading the Maple Leafs to a 5-3 victory over the Avalanche on Saturday night.

Auston Matthews also had a goal and an assist as Toronto earned its second straight win since Sheldon Keefe took over after Mike Babcock was fired Wednesday. Keefe coached the Maple Leafs to a 3-1 win at Arizona on Thursday night and had to survive a frenetic ending to earn another victory.

"Sometimes they're not too pretty," goaltender Frederik Andersen said of the win.

WATCH | Barrie leads Leafs past Avs in return to Colorado: 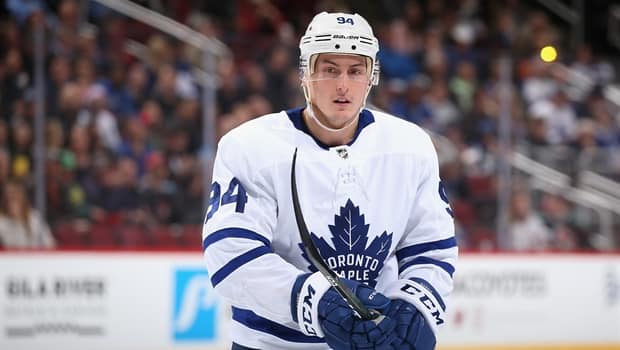 1 year agoVideo
1:52
Tyson Barrie had a goal and an assist to lead the Toronto Maple Leafs to a 5-3 victory over the Colorado Avalanche 1:52

Barrie, who was traded to the Maple Leafs in July, got a warm reception from fans during a timeout in the first period. The defenceman spent seven-plus seasons with the Avalanche and left as the franchise leader in goals (75), assists (232) and points (307) at his position.

Barrie tops it off

During a timeout in the first period the team played a highlight video of his career with the franchise and the fans gave him a standing ovation.

"I wasn't sure how it was going to feel coming back here," Barrie said. "It's been an amazing place to call home the last few years and that really topped it off."

Nazem Kadri, who was sent to Colorado in the deal, had two assists against his former team.

The Maple Leafs recovered after Colorado's Nathan MacKinnon scored 31 seconds into the game.

Shore tied it midway through the first period. Matthews put Toronto in front 67 seconds later, and Barrie gave the Maple Leafs a two-goal lead with his second goal in two games with 6:38 left.

"It was good for Barrie to get a big goal coming back here, in a place he spent a lot of time and that gave us some jump as well," Matthews said.

Kapanen capped the eight-minute surge with his seventh of the season with 2 1/2 minutes to go.

That chased Philipp Grubauer, who allowed four goals on 15 shots. Pavel Francouz had 12 saves in relief.

"I think the first period was a bit of a write off, we didn't show up, so [we] just dug ourselves in a hole and it was too much to climb out of," Kadri said. "Second and third periods, we were definitely the better team but the first period hurt us."

The Avalanche crept back into the game with goals from Andre Burakovsky in the second period and Valeri Nichushkin in the third to make it 4-3. Nichushkin's goal was his first since March 4, 2016, when he was with Dallas, a span on 92 games.

Andersen's mask was dented by a shot before Nichushkin's goal and he was trying to alert the official to stop play so he could get a new one.

"The cage had a huge dent in it. I tried to get it blown down so I could get a new one but the ref didn't see it," Andersen said. Luckily nothing happened but obviously when it's dented, the middle eyelid there, the space there is pretty big. I don't know if a puck could've gone in but a stick definitely could have."

Andersen came up big in the final 2:47 when Colorado had an extra skater on the ice. The Avalanche had the puck in the Toronto end for most of that time but couldn't score.