Hockey analyst Kelly Hrudey wanted the NHL to respond in a meaningful way after NBA teams boycotted their playoff games Wednesday in the wake of the weekend shooting of a Black man by police in Wisconsin. 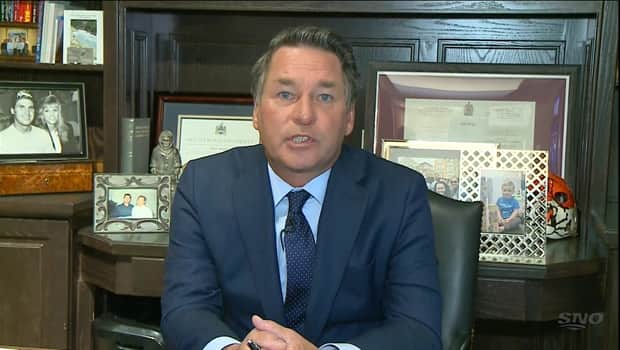 Kelly Hrudey on NHL games continuing: 'I don't think we should be here'

2 months ago
0:57
Hockey Night in Canada's Kelly Hrudey gave his thoughts on the NHL's decision to continue playing games after boycotts in the WNBA, NBA, and MLB. 0:57

Hockey analyst Kelly Hrudey wanted the NHL to respond in a meaningful way after NBA teams boycotted their playoff games Wednesday in the wake of the weekend shooting of a Black man by police in Wisconsin.

The NHL, which did not postpone any of its games on Wednesday, held a "moment of reflection" instead before the Boston Bruins played the Tampa Bay Lightning in Game 3 of their second-round playoff series in Toronto.

Deputy commissioner Bill Daly said Wednesday postponing games was not currently being contemplated, but added, "Obviously, we will see if the players feel differently and will respond appropriately and as necessary."

On Wednesday, Hrudey felt the league should have gone further after the shooting of Jacob Blake and the NBA's decision.

"I don't think we should be here. I think the NHL should postpone the games," Hrudey said during a TV hit on NHL Canadian rights-holder Sportsnet before the puck drop at Scotiabank Arena. "I really feel we should be more supportive of Black Lives Matter.

"I know for myself, instead of watching hockey, I'd prefer to be having this conversation with my family."

Jacob Blake was shot multiple times by police in Kenosha, about 40 miles south of Milwaukee. The Blake family's lawyer said he was paralyzed and that it would "take a miracle" for him to walk again.

The shooting of the 29-year-old Blake was captured on cellphone video Sunday and ignited protests in Kenosha and elsewhere.

The Milwaukee Bucks were first to boycott, when they didn't take the floor for Game 5 of their first-round playoff series with the Orlando Magic at Lake Buena Vista, Fla., in the late afternoon. The NBA later announced that all three of the day's scheduled playoff games had been postponed.

The Bucks' move resonated around the sports world.

All three WNBA games on the league's schedule were postponed.

The Milwaukee Brewers and the Cincinnati Reds opted not to play their Major League Baseball game on Wednesday night. MLB followed with postponements of a Los Angeles Dodgers-San Francisco Giants game and a Seattle Mariners-San Diego Padres contest.

The Toronto Blue Jays, meanwhile, went ahead with their home game against the Boston Red Sox in Buffalo, N.Y., which started about an hour after the Bucks had boycotted.

Manager Charlie Montoyo said his team didn't have time to discuss sitting out Wednesday night, but he expects to have that conversation before Thursday's game.

"I understand and support the teams that have decided not to play, but it was right before the game when we found out and the players were already out there. So we proceeded to play," Montoyo said.

"We're going to discuss it and see where we go with this." 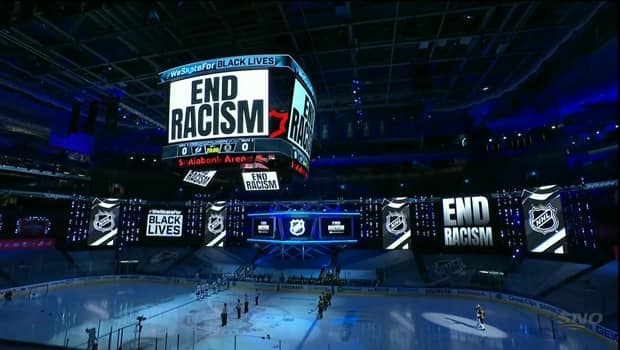 2 months ago
0:34
The National Hockey League held a moment of silence for Jacob Blake and his family prior to puck-drop between the Boston Bruins and Tampa Bay Lightning. 0:34

Hrudey, a former NHL goaltender, said the NHL was "missing out" on important discussions about racial injustice by not postponing its games.

"This would be an important night for many families to have the discussion again. ... So I'm disappointed that we're talking about hockey tonight," he said.

The league unveiled its #WeSkateFor campaign as part of its restart to the pandemic-delayed season — with #WeSkateForBlackLives and #WeSkateForEquality banners featured behind the nets in both buildings hosting the resumption of play.

A public address announcer at Scotiabank Arena read a statement before the brief moment of reflection, saying, "the NHL and the hockey community are committed in the mission to combat racial injustice."

"The NHL would like to take this moment to wish Jacob Blake and his family well, and call out to our fans and communities to stand up for social justice and the effort to end racism," the announcer continued.

Vegas Golden Knights forward Mark Stone was asked if he saw the Blake video and his reaction.

"I saw the video yesterday. It's heartbreaking, really. It's been an issue the last couple of months. I have played with guys from tons of different races. They are just teammates for me. I don't look at them in any other way."

Vancouver Canucks defenceman Troy Stecher said he had not seen the video.

"I have heard all about the context and the incident. It's heart-wrenching, it's disgusting. Like anything in life as a team, you need to come together, and we need change. This is direct evidence of that. Our thoughts and prayers are with his family and that community."

"Black Lives are more important than sports. PERIOD," she tweeted. "I'm going to need hockey, especially, to understand that."

Members of the Philadelphia Flyers, who beat the New York Islanders 4-3 Wednesday afternoon, learned about the NBA boycott during a video conference with reporters following their game.

"Listen, I've been totally involved in this afternoon's game. I had no idea. It's the first I've heard of this," Flyers coach Alain Vigneault said.

Flyers forward Sean Couturier said everyone has to play a part in the fight for social justice. "I think we've each got to take responsibility just in respecting each other and treating each other equally. I think that will make us advance in society," he said.

Minnesota Wild defenceman Matt Dumba, who knelt for the American anthem on the first day of the NHL's restart in Edmonton earlier this month, praised NBA players on Twitter.

"NBA Players leading! WE STAND WITH YOU AND DEMAND CHANGE!" the Regina native said.

"Major statement by the NBA players. I'm with it," he tweeted.