NHL says crackdown on faceoff cheats is about safety, integrity of game

Faceoffs were a group effort and penalty boxes were full as the NHL opened it's pre-season schedule this week.

'It was becoming unsafe for the linesmen, with (players') feet behind them'

Faceoffs were a group effort and penalty boxes were full as the NHL opened it's pre-season schedule this week.

Centres were repeatedly tossed out of the faceoff circles, while disbelieving players were sent to the box for what looked to be waving their sticks in the general area of an opponent's gloves.

It was all part of the league's crackdown on faceoff cheats and slashes to the arms and hands. And for as long as it lasts, players will have to adjust.

"We just felt we'd let it erode too much and it was time to shore up the faceoff procedure, especially the marks in the faceoff circles," NHL director of officiating Stephen Walkom said Tuesday. "It was becoming unsafe for the linesmen, with (players') feet behind them.

In eight pre-season games on Monday night, there were 49 slashing calls and nine penalties for faceoff violations.

The changes do not stem from new rules, but from stricter enforcement of the old ones.

For faceoffs, players must face their opponent squarely and keep their feet behind the lines. It was widespread for centres to cheat by moving as close as possible to the faceoff dots to gain leverage on opponents.

"Players were coming together and banging their heads before the puck was even in the faceoff dot," said Walkom. "The markings have been there since the mid-1990s, but over time, players crept in closer and closer."

If a player cheats, he is tossed out of the faceoff and a teammate takes his place. If a team does it twice on the same faceoff, it is a two-minute penalty.

But, clearly not used to it, players were banished on nearly every draw. Wingers and even defencemen when teams were shorthanded two men, were pressed into service even though linesmen talked to each team before the games to explain how faceoffs would be called. 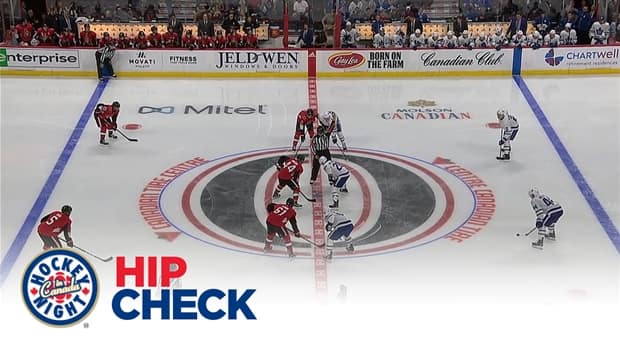 Hip Check: Hockey is back

"In the first period, I saw Phillip Danault take one faceoff — and he's supposed to be the centre," said Montreal Canadiens prospect Charles Hudon. "It's weird."

Some wonder how long it will last. The league has had crackdowns on various fouls before that seemed to fade as the regular season moved along and vanish in the playoffs.

Coach Claude Julien doesn't doubt the league is thinking long-term, but wonders if the standard may be tweaked later on.

"They just want to clean it up, so we have to have an open mind and see what they're doing," said Julien."Right now there's no doubt that if you're six foot five and have the long reach you're going to have an advantage over a guy that's five foot 10, especially if you can't get in close, but let's give it a chance.

"I'm sure at some time everyone will revisit that and come up with the right solution."

For centres, the adjustment won't be easy. And players considered the best on faceoffs may find them harder to win without the little tricks they've developed over years.

'Game within a game'

"Faceoffs are a game within a game," said centre Peter Holland. "If you're not cheating, you're just cheating yourself.

"It's a question of who can get away with more of it. Puck possession is such a huge factor in the game right now. Especially when you start in the offensive zone. You want to sustain O-zone time. It plays a bigger role than people give it credit for."

Walkom was director of officiating in 2005-06 when, coming out of a lockout year, the league cracked down on hooking and holding. While that lasted only a few seasons, an aspect that remains is penalties for placing the stick in front of an opponent to try to slow him down.

A tendency to take a whack at an adversary's hands or stick to make him lose control of the puck grew out of that. Now the league wants to stop it.

"It's not that they'll never do it again, there's a lot of reflex action, but you hope that over time it deters that kind of behaviour," he said.