Connor McDavid broke a 2-2 deadlock with a little more than five minutes remaining in the third period to lift the Edmonton Oilers over the Vancouver Canucks on Wednesday.

Draisaitl had a goal and two assists, Connor McDavid snapped a third-period tie and Edmonton opened the new season with a 3-2 victory over the Vancouver Canucks in Dave Tippett's debut as Oilers coach Wednesday night.

"We made it easy on each other," Draisaitl said. "We played simple, we played hard, and we did what we had to do to beat this team."

McDavid broke a 2-all deadlock with 5 1/2 minutes to play, splitting the defence before beating goalie Jacob Markstrom to the blocker side on a strong solo effort. 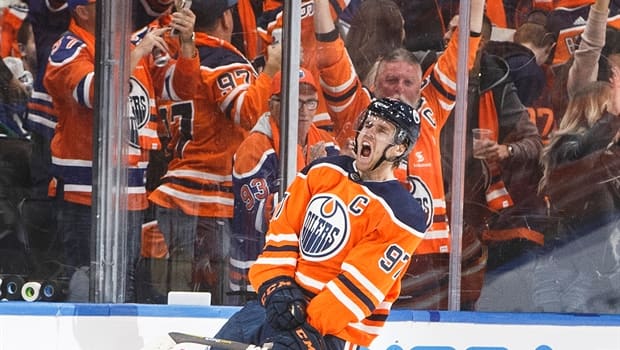 McDavid scores a beauty to lead Oilers over Canucks

1 year ago
0:25
Connor McDavid split the defence to score the game-winning goal in Edmonton's 3-2 victory. 0:25

Zack Kassian also scored for the Oilers and added an assist. Mike Smith made 31 saves in his first game with Edmonton.

"Leon was a horse, as he always is," McDavid said. "Kass brought a lot of energy tonight, like he does as well. It was a real good start for those two and something I look forward to watching all season long."

Tippett was impressed by Draisaitl's play.

"What you like about him is he's a dominant player out there," Tippett said. "You're in a tight game. He's got lots of juice, so we kept (putting) him out there."

Alexander Edler and Tanner Pearson had the goals for the Canucks, who won their previous five openers.

"There were a couple of minutes that we'd like to have back," Pearson said. "That's the way it goes. Those minutes can cost you the game."

The Oilers started the scoring nearly six minutes into the first period when Kassian won a battle in the crease and fed the puck out to Draisaitl, who beat Markstrom.

Smith kept that lead intact through the first, making a huge toe save on J.T. Miller.

Vancouver tied the game 12 minutes into the second shortly after a power play expired as a long-range shot by Edler appeared to hit something in front before getting past Smith.

The Canucks took a 2-1 lead midway through the third when a point drive by Tyler Myers was tipped past Smith by Pearson.

Just more than a minute later, the Oilers knotted the game back up as Kassian picked the top corner after taking a pass from Draisaitl.

"It was a huge team win," Smith said. "We never crumbled when we got down 2-1. You love to win, so it feels good to get that first one under our belts."