Despite hot start, lack of scoring depth has Oilers playing with fire

What the Edmonton Oilers' supporting cast is able to muster in the weeks and months ahead will no doubt play a deciding role in the team's fate this season.

A dozen games into the season and the Edmonton Oilers still share the Western Conference penthouse with the Colorado Avalanche.

The main reason for Edmonton's success airs virtually every night on the national highlight reel: Connor McDavid and Leon Draisaitl working their routine magic on the top line.

Just as important, however, has been the standout goaltending of Mike Smith and Mikko Koskinen behind a vastly improved defence (which is saying something given the dependable Adam Larsson is out with a fractured right fibula).

On Sunday afternoon, Smith and Koskinen proved mortal as Edmonton fell 6-2 to the Florida Panthers in a rare matinee at Rogers Place.

"Our goaltending has been very good," head coach Dave Tippett said after the first home loss of the season. "[Sunday night] it was average." 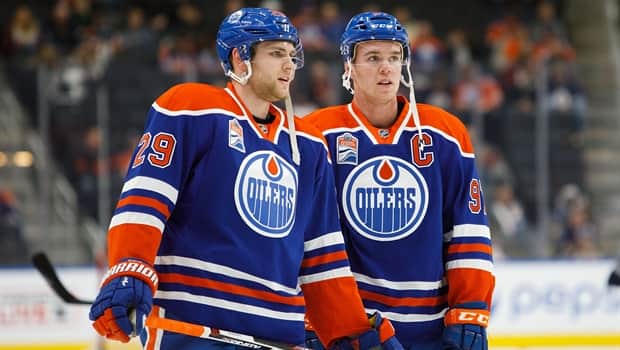 1 year ago
1:18
The duo in Edmonton is piling up the points and the Oilers are reaping the benefits. 1:18

Average was not going to cut it on Sunday — or on most days with this team.

The margin for error in the Edmonton net is almost non-existent given the lack of scoring depth behind the big three up front.

Going into Monday's games, McDavid and Draisaitl are tied for second in the NHL points race with 21 —  averaging nearly two points a game — while James Neal is second in goals with 10.

Take away Zack Kassian's three goals and the rest of the forwards have combined for just two goals in 12 games.

But Edmonton has relied on some late-game heroics — mainly from the usual suspects in McDavid, Draisaitl and Neal. They've played from behind in nine of 12 outings this season. Another alarming statistic? They've led for 188:30 minutes and trailed for 195:38.

That's not a recipe for long-term success.

On Sunday, the Oilers looked like they'd reported for a sleepy morning skate rather than an actual game. Smith turned away seven shots in the first period before his mates fired even one at Sergei Bobrovsky in the Florida net.

The game truly slipped away in a span of 2:05 early in the second period when Smith surrendered three goals before Tippett applied the hook.

"It's one thing to be down one, but you start feeding teams two or three and you are playing with fire a bit," Smith said. "You're not going to come back in a lot of those games."

Falling behind early isn't helping the guys charged with secondary scoring, either.

"When you're chasing the game, it's harder for them," Tippett said. "They haven't contributed as much as they'd want, and I think a lot of those guys are feeling that pressure."

And still, there's no question the Oilers are exceeding expectations this season.

"We're still off to a good start, and we still want to have that positive energy in the group," said defenceman Oscar Klefbom. "But we've still got to learn from this."

So, yes, on some nights McDavid and Draisaitl will no doubt have to keep carrying the team into the win column. And yes, Smith and Koskinen will need to keep stealing games here and there.

But what the supporting cast is able to muster in the weeks and months ahead will no doubt play a deciding role in the Oilers' fate.

"We've got to find something down there to create some opportunities," Tippett said. "I really feel that once they get on the board, get going, everyone will loosen up a little bit."