If the season ended today, the Edmonton Oilers would host the Calgary Flames in the first round of the Stanley Cup playoffs — providing Albertans a delightful distraction from the plummeting price of oil.

From High Level to Edmonton to Calgary and Milk River, an entire generation of hockey fans has grown up listening to tales of the Battle of Alberta glory days.

With 12 games remaining on the  2019-20 docket, another playoff instalment of the Battle of Alberta is looking more likely with every passing day.

If the season ended today, the Oilers would host the Flames in the first round of the Stanley Cup playoffs — providing Albertans a delightful distraction from the plummeting price of oil.

WATCH | 40 years of the Battle of Alberta: 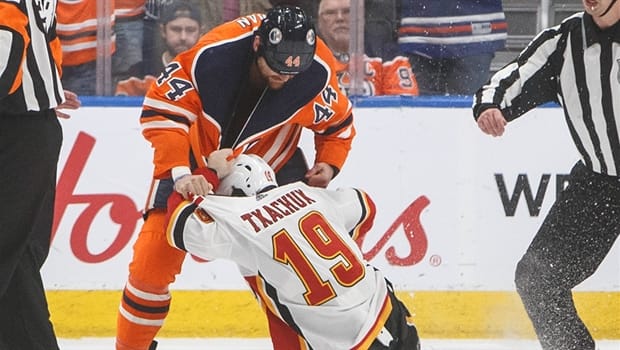 The last time these two teams met in the post-season? Way back in 1991 when Essa Tikkanen popped the winning goal in overtime of Game 7.

Sure, the Vancouver Canucks sit just three points back of the Flames with two games in hand. And sure, there's plenty of hockey to be played.

But in Alberta, hockey fans are beginning to believe in the dream.

Calgary LW Matthew Tkachuk vs Edmonton RW Zack Kassian: Tkachuk is hardly Mr. Popularity in any of the 30 stops on the NHL, but he is widely despised in the Alberta capital. Tkachuk enraged Kassian back on Jan. 11 with two questionable hits, and the Edmonton forward earned a two-game suspension for rag-dolling his opponent in response. With many in the crowd wearing turtle costumes in Tkachuk's honour, the long-time foes fought Jan. 29 in Edmonton. The dislike between the two would no doubt escalate quickly in a best-of-seven.

Edmonton RW James Neal vs. Calgary LW Milan Lucic: Last summer, Edmonton general manager Ken Holland and Calgary counterpart Brad Treliving made headlines by trading one disgruntled veteran for another. Thanks mainly to a torrid start to the season, Neal has 19 goals – 17 of them on the power play — and 31 points in 54 games. In comparison, Lucic has eight goals and 20 points in 68 games. (The Flames will receive a third-round draft pick if Neal reaches 21 goals and finishes the season with at least 10 more goals than Lucic.)

Calgary G David Rittich vs. Edmonton C Leon Draisaitl: The enigmatic Rittich is a man of big emotions. When happy, the Czech netminder is the funniest guy in the room. When unhappy, he smashes sticks like John McEnroe busted tennis rackets. And back on Jan. 29, Rittich angered the Oilers by flipping his stick in delight after poke-checking Draisaitl to seal a 4-3 win in the shootout. "It's just disrespectful," Draisaitl later said. "We hit two posts, and he's acting like they won the Stanley Cup." Days later, the Edmonton bench taunted Rittich after he received the hook for surrendering four goals on 17 shots in what ended up an 8-3 Oilers rout. 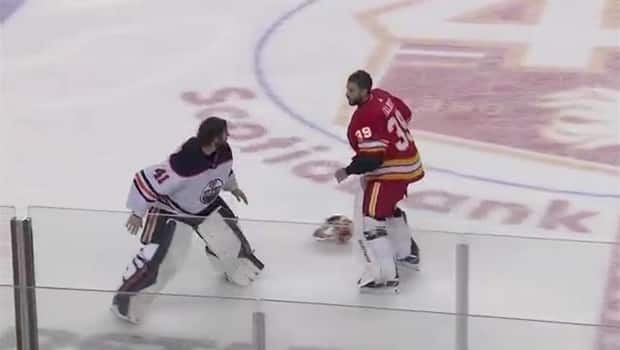 1 year ago
0:47
Oilers' Mike Smith and Flames' Cam Talbot meet at centre ice and drop the gloves as the Battle of Alberta boils over. 0:47

Calgary G Cam Talbot vs Edmonton G Mike Smith: Cue the Rocky music. In a scene likely not to be repeated, the two netminders dropped their gloves (and blockers) on Feb. 1 in the first NHL goalie fight since 2013. Talbot, formerly of the Oilers, signed as a free agent last summer with Calgary. Smith, formerly of the Flames, inked a deal with Edmonton.

Edmonton C Connor McDavid vs. Calgary D Mark Giordano: Oilers fans won't soon forget the fact that McDavid's season ended last year on a diving trip by Giordano (the Calgary captain was going for the puck.) McDavid suffered a torn PCL, tears to both his medial and lateral menisci, a completely torn popliteus muscle, and tibial plateau fracture. Fast forward to Jan. 29 of this season when Giordano clipped McDavid's left leg in neutral ice. Television cameras later captured the Edmonton captain snapping his stick in anger on the bench.

The two Alberta teams meet on April 4 in Calgary to close the regular season, and then, just maybe, in the playoffs for the first time in 29 years.