The Ottawa Senators acquired two-time Stanley Cup champion goaltender Matt Murray from the Pittsburgh Penguins during the NHL draft, while Canadian clubs look to bolster rosters ahead of the new campaign.

Pierre Dorion vividly remembers Matt Murray entering the Pittsburgh crease inside a raucous Canadian Tire Centre with the Ottawa Senators up 4-0 midway through the first period of Game 3 of the 2017 Eastern Conference final.

While the Penguins would go on to lose that night to fall behind 2-1 in the series, Murray steadied things in place of Marc-Andre Fleury before backstopping his team to wins in three of the next four — including a memorable double overtime victory in Game 7 — to advance to the Stanley Cup final.

"When Matt Murray came in," Dorion said Wednesday, "it definitely made the task harder for us."

The Senators general manager is hoping after a couple of difficult seasons, including a stunning upset against the underdog Montreal Canadiens during the NHL's 24-team summer restart that saw him benched in favour of Tristan Jarry, the netminder can rediscover his form in the nation's capital.

WATCH | The fate of goaltenders:

4 months agoVideo
3:56
There are plenty of big names available this year when free agency officially opens, but Rob Pizzo says plenty of teams may have new goalies when next season starts.  3:56

Dorion made the biggest splash on the second day of the NHL draft to kick off what should be an interesting period across the league with a flat salary cap and the financial unknowns related to the COVID-19 pandemic by acquiring the 26-year-old Murray from Pittsburgh in exchange for forward prospect Jonathan Gruden and this year's 52nd pick.

"He's someone that brings credibility to the position," Dorion said on a video conference call with reporters. "Someone we feel that has something to prove."

A two-time Cup champion with Pittsburgh, the Thunder Bay, Ont., native was selected 83rd overall by the Penguins in 2012 and ranks third in franchise history with 117 victories and 11 shutouts. Over 199 career regular-season games, Murray has a record of 117-53-19 to go along with a .914 save percentage and a 2.67 goals-against average.

And if there was any doubt about Murray's future in Pittsburgh, it was put to rest when the club signed Jarry, a fellow pending restricted free agent, to a three-year, $10.5-million US extension over the weekend.

The rebuilding Senators, meanwhile, desperately needed to address their goaltending after announcing last month they wouldn't be offering a contract to 39-year-old Craig Anderson, while the health of backup netminder Anders Nilsson remains a big question mark.

"Without a doubt we see Matt as a No. 1 goalie in this league," said Dorion, who raised some eyebrows when he announced all-star winger Anthony Duclair wasn't extended a qualifying offer and will hit unrestricted free agency. "We knew during the course of the year that he could possibly be a goalie that could be on the move."

WATCH | NHL analyst Dave Poulin on what's next for NHL:

After a successful pandemic playoffs, what's next for the NHL?

4 months agoVideo
6:03
The NHL had zero cases in the bubble during the 2020 Stanley Cup Playoffs, but what's next for the league? Andi Petrillo speaks with NHL analyst Dave Poulin. 6:03

Murray is set to become an RFA on Friday when the market opens after completing a three-year, $11.25-million contract, but Dorion doesn't expect a difficult negotiation.

"We haven't talked [with his agent]," he said. "But just in talking to him, the excitement in his voice, it felt like he was someone who just got drafted.

"He was so excited about our team, about our core of young players, and the opportunity to re-establish himself as one of the premier goalies in the NHL."

Unlike a number of teams pressed tight to the $81.5-million cap that's expected to stay put for some time because of the pandemic's financial realities, Ottawa has both room and assets to manoeuvre if it sees fit.

The Senators entered Day 2 of the remote draft that wound up moving at a glacial pace with nine picks, including four second-rounders and two third-rounders after grabbing forward Tim Stuetzle at No. 3, defenceman Jake Sanderson at No. 5 and centre Ridly Greig at No. 28 on Tuesday.

After dealing for Murray, Ottawa selected winger Roby Jarventie at No. 33 before acquiring the 44th pick from the Toronto Maple Leafs for Nos. 59 and 64. The Senators used that slot to snag defenceman Tyler Kleven from the U.S. under-18 program and the University of North Dakota. Sanderson, fellow blue-liner Jacob Bernard-Docker, who Ottawa took at No. 26 in 2018, and centre Shane Pinto — the 32nd pick by the Senators in 2019 — are all members of the Fighting Hawks in U.S. college hockey.

4 months agoVideo
0:35
Quinton Byfield from Newmarket, Ont., is selected 2nd overall in the 2020 NHL draft by the Los Angeles Kings. 0:35

"I'm not gonna make any bold statements," Dorion said. "But these past few days have been days that really set the franchise forward for many years to come."

After just two trades involving draft picks during the first round, Wednesday's second deal involving established NHLers came down when the Nashville Predators shipped centre Nick Bonino and two 2020 picks (Nos. 37 and 70) to the Minnesota Wild for forward Luke Kunin and the 101st selection.

After selecting star winger Alexis Lafreniere at No. 1 Tuesday, the New York Rangers dealt centre Lias Andersson, who they took with the seventh selection in 2017, to the Los Angeles Kings for the 60th pick.

The Winnipeg Jets got some business of their own done earlier in the day by inking pending UFA defenceman Dylan DeMelo to a four-year, $12-million contract extension. Winnipeg acquired DeMelo from Ottawa prior to February's trade deadline for a third-round pick (71st overall) this year.

Meanwhile, the Edmonton Oilers signed winger Jesse Puljujarvi to a two-year contract. The No. 4 pick in the 2016 draft, who played in his native Finland last season, has registered just 17 goals and 37 points in 139 NHL games. 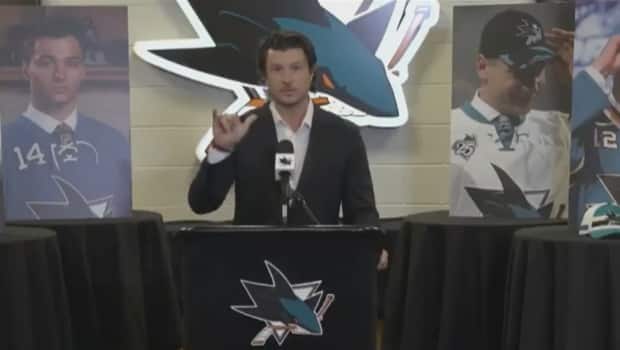 Recapping the best moments from the 2020 NHL Draft

4 months agoVideo
5:33
CBC Sports' Matt Cullen joined Heather Hiscox on CBC Morning Live to highlight the best moments from the first round of the 2020 NHL Draft. 5:33

The Vancouver Canucks, who didn't have a pick in the first or second round, chose defenceman Joni Jurmo at No. 82 and then selected winger Jackson Kunz (113th), blue-liner Jacob Truscott (144th), centre Dmitry Zlodeyev (175th) and defenceman Viktor Persson (191st).