The Buffalo Sabres will select first overall at the NHL Draft for the first time in 31 years after winning Saturday's lottery. Buffalo entered the lottery with the best odds at 18.5 per cent and become the 16th team to win the sweepstakes.

Ottawa Senators fall to 4th as Carolina climbs to 2nd

The Buffalo Sabres will select first overall at the NHL Draft for the first time in 31 years after winning Saturday's lottery. Buffalo entered the lottery with the best odds at 18.5 per cent and become the 16th team to win the sweepstakes.

"It's awesome, it's a great feeling. I wasn't too nervous about the whole process," said Sabres general manager Jason Botterill. "I hope [the fans] are ecstatic. They've been extremely supportive. You felt in the building, a lot of quietness coming into the games, but whenever we did something they wanted to cheer, they wanted to be supportive."

Carolina was the biggest winner on Saturday night. The Hurricanes had just a three per cent chance of earning the top selection, the 11th-best odds, and jumped to second overall.

The Montreal Canadiens came into Saturday's lottery with the fourth best odds at 9.5 per cent and will select third overall. The Habs have selected third overall once since 1969 taking Alex Galchenyuk at No. 3 in 2012.

"It's a good pick, we're obviously in better shape than we were this morning. Obviously you want to pick as high as you can," said Canadiens general manager Marc Bergevin. "From what our guys are saying, it's a good draft, but again at three we get a player that's probably going to play sooner than later."

However, Bergevin also acknowledged that he would be open to trading the pick. 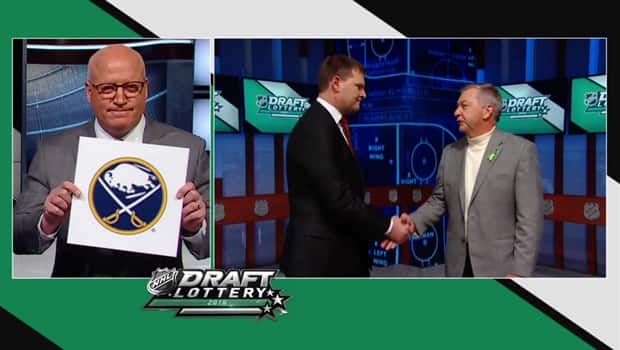 The Ottawa Senators were the biggest losers after entering the lottery with the second best odds, behind only the Buffalo Sabres, with a 13.5 per cent chance to win the top selection, but dropped to fourth overall.

For the third consecutive year the Vancouver Canucks dropped in the draft lottery falling from six to seven. Edmonton also moved down one spot from No. 9 to No. 10.

Swedish defenceman Rasmus Dahlin is the consensus No. 1 pick for this year's draft. The 18-year-old has already drawn comparisons to Ottawa Senators captain Erik Karlsson and Hall of Famer Nicklas Lidstrom.

"The type of defenceman that pretty much all 31 teams in the National Hockey League want these days," said Botterill who watched Dahlin at the 2018 world juniors in Buffalo. "Just that ability to jump up in the rush and create offensive chances, but also have that competitive spirit to play against other teams top players."

The six-foot-two, 183-pound native of Trollhattan, Sweden, scored seven goals and had 13 assists while averaging over 19 minutes per game in ice time in 41 games for Frolunda of the Swedish Hockey League.

"The last guy to come in with his type of credentials, or close to this, would've been Victor Hedman," said Dennis MacInnis, the director of scouting for ISS Hockey, which ranks prospects for the NHL. "I think [Dahlin] has more offensive upside than Hedman, and he's certainly ahead of him at the same age as far as the offence goes.

"He's just got elite, elite hockey sense and vision. His skating is at an elite level. Not a lot of weaknesses in his game."

The 15 teams that failed to qualify for the playoffs participated in the lottery. The order of picks No. 4-15 was set prior to Game 2 between the San Jose Sharks and Vegas Golden Knights. The top three selections were announced during the second intermission of the game.

The Detroit Red Wings dropped from fifth to sixth in the lottery while the Arizona Coyotes went from third to fifth. The Chicago Blackhawks fell to No. 8 after entering with the seventh best odds.

The New York Rangers moved down from the No. 8 selection to No. 9 while the New York Islanders, the owner of two first-round picks after acquiring a first rounder from Calgary in exchange for Travis Hamonic last year, will pick 11th and 12th.

The Dallas Stars, Philadelphia Flyers and the Florida Panthers will select 13-15 respectively.

The NHL draft goes June 22-23 at the American Airlines Center in Dallas.

The remaining order for the first round's picks will be determined as the Stanley Cup playoffs progress.