The NHL and lawyers for retired players say a tentative settlement has been reached in a lawsuit brought against the league over head injuries.

The National Hockey League announced a tentative $18.9 million US settlement Monday with more than 300 retired players who sued the league and accused it of failing to protect them from head injuries or warn them of the risks involved with playing.

The lawsuit, consolidated in federal court in Minnesota, was by far the largest facing the league. The NHL, as it has for years, did not acknowledge any liability for the players' claims in the proposed settlement and it can terminate the deal if all 318 players or their estates don't elect to participate.

The settlement is significantly less than the billion-dollar agreement reached between the NFL and its former players on the same issue of head injuries. Each player who opts in would receive $22,000 and could be eligible for up to $75,000 in medical treatment.

Players' attorney Stuart Davidson said he knows there will be comparisons between the NHL and NFL settlements, even though they differ drastically. 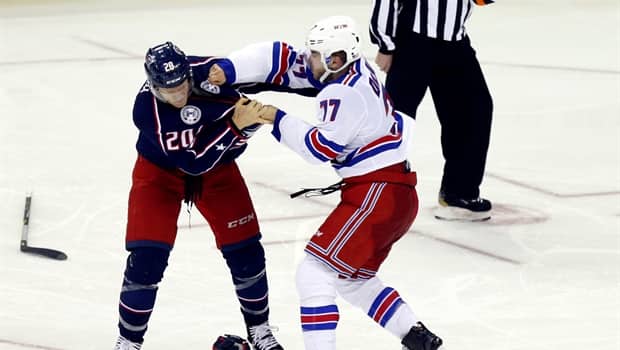 2 years agoVideo
2:32
The National breaks down the tentative settlement in the NHL's concussion lawsuit. 2:32

"When you have a defendant who has spent millions of dollars litigating a case for four years to prove that nothing is wrong with getting your brain bashed in, you can only get so far," Davidson told The Associated Press. "I think it's important for players who have an opportunity to settle their case with the NHL now to understand that before they get anything through a trial against the NHL it's going to cost millions of dollars in experts to get there, and that's going to have to be paid for before they see a penny from any recovery, assuming they win."

An NHL spokesman said the league would not make any comment until after the opt-in period of 75 days for players. There were 146 players who added their names to the lawsuit as plaintiffs between November 2013 and this August and 172 more who joined as claimants.

In addition to the cash payment, the settlement includes:

Retired player Daniel Carcillo, one of the plaintiffs, urged players not to accept the settlement. In a series of tweets , he said players would be forced to see the same NHL and NHLPA doctors to determine if they'd be eligible for treatment.

Carcillo also asked for Wayne Gretzky's thoughts: "I want him to use his platform to help the men who protected him throughout his career. Lack of pressure from former players is a direct result of this insulting attempt at a settlement."

Messages left with several players who were part of the lawsuit were not immediately returned.

I want <a href="https://twitter.com/WayneGretzky?ref_src=twsrc%5Etfw">@WayneGretzky</a>’s thoughts on the concussion lawsuit. I want him to use his platform to help the men who protected him throughout his career.<br><br>Lack of pressure from former players is a direct result of this insulting attempt at a settlement.<br><br>I’m asking for your help Wayne.

Former NHL star Dennis Maruk says the proposed NHL concussion settlement that will see former players receive $22,000 U-S is NOT good enough. He says “they should add another zero to it.”<br>He’ll vote against the tentative deal. <br>He says he suffered 6 concussions during his career. <a href="https://t.co/Sjj0HdqCC3">pic.twitter.com/Sjj0HdqCC3</a>

The bid for class-action status would have created one group of all living former NHL players and one group of all retired players diagnosed with a neurological disease, disorder or condition. Had Nelson certified the class action, more than 5,000 former players would have been able to join the case.

'Lopsided victory for the owners'

Davidson called Nelson's decision a "watershed moment" for the case and that players lost leverage as a result.

"It severely limited the damages to the NHL owners and benefits to the NHL players," Vanderbilt University sports economic professor John Vrooman wrote in an email to The AP. "This decision essentially forced the 140 [plus] players involved in the suit to settle and prevented the participation of all other potential litigants. So it will seem that both sides `won' in what was really a lopsided victory for the owners. It's just that all of the owners won by gaining current and future protection from damages and a minor fraction of the players won something that they would have zero chance in obtaining in isolation versus the league."

Attorneys with Minneapolis-based law firm Zimmerman Reed said the main goal of the lawsuit was to get retired players medical testing and treatment paid for by the NHL.

"The most important thing I think for us, the lawyers, was the ability to get testing and treatment if they need it, and that the NHL is going to put up a chunk of money for a common good fund to help retired players," Davidson said.

Bettman and deputy commissioner Bill Daly have on multiple occasions said the lawsuit had no merit.

"When it comes to focusing on concussions and trying to understand them and how to treat them, we've been leaders in the field," Bettman told The AP in May. "And that gets completely lost in the rhetoric of the litigation, and I don't like discussing the litigation. There is a sense because it gets sensationalized that the reality of our position with player safety is somehow at odds with the reality of the science and the medicine and it's not true. We study it very closely."

The NFL settlement covers more than 20,000 retired players, and lawyers expect payouts to top $1.5 billion over 65 years. As of last month , the NFL concussion lawsuit claims panel has approved more than $500 million in awards and paid out $330 million.