NHL commissioner Gary Bettman says it would be impossible to ban all hits to the head and maintain hockey as a physical game.

The commissioner of the National Hockey League hit back Wednesday at the notion of banning any kind of head contact in hockey, telling a parliamentary panel that such a rule would be impossible to enforce and lead to the end of hitting in hockey.

The league has faced calls to penalize any head contact in the hope of eliminating potentially debilitating concussions. Those calling for a strict rule include Ken Dryden, the former Montreal Canadiens goalie and cabinet minister in Paul Martin's Liberal government.

In sometimes combative testimony, commissioner Gary Bettman said such a rule at the NHL level would mean larger players would inevitably land blows on smaller players' heads in the normal course of play, leading to penalties. Ultimately "there would be no more body checking" — something that players and fans feel is an "exciting, appealing, entertaining" and important part of the game.

Bettman decried what he called "blanket statements about changing a rule" on head contact that might not address "where the injuries are being caused." 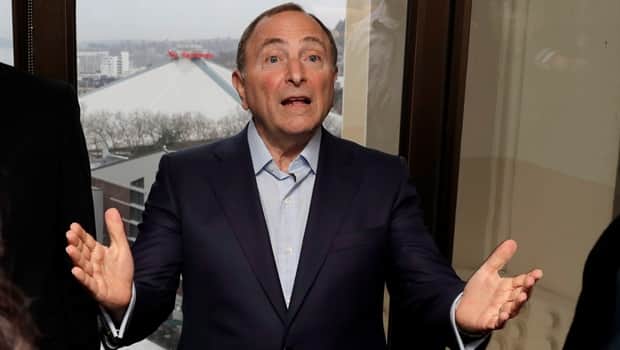 2 years agoVideo
1:14
NHL commissioner says other than some anecdotal evidence, there has been no firm connection made between CTE and head trauma in hockey. 1:14

He said the game he oversees is safer for players and different in terms of physical contact from football, where there are repeated blows to players' heads, and he questioned any direct link between multiple hockey concussions and chronic traumatic encephalopathy (CTE), which is a brain condition associated with repeated blows to the head. CTE can be profoundly debilitating, with symptoms that include memory problems, personality changes, aggression and depression.

"I don't believe there has been, based on everything I've been told — and if anybody has information to the contrary, we'd be happy to hear it — other than some anecdotal evidence, there has not been that conclusive link," Bettman said.

When asked if there were any rules or changes he would make to the game to reduce head contact, Bettman told MPs he likes the way professional hockey is being played, adding: "Right now, I don't believe there's much we can do."

The special committee of MPs has spent months holding hearings on the issue of concussions, including options for treatment, prevention and what, if anything, the federal government should be doing about sports-related head injuries. Experts and athletes have appeared before the cross-party panel, as well as high-profile figures such as CFL commissioner Randy Ambrosie and former NHL player Eric Lindros, whose hall-of-fame career was cut short by multiple concussions.

Bettman and his deputy Bill Daly were the final witnesses of the committee's study before it tables a report in the coming weeks. Although attention has focused on amateur athletics, the committee could recommend concussion protocols for professional sports.

'It is too dangerous'

"I'm hoping that's not the case," Bettman said after the meeting about that possibility.

The National Hockey League has faced criticism for its handling of head injuries — despite a long list of rules, studies and league-player committees focused on safety that Bettman listed — and CTE after it was found in former players Steve Montador and Derek Boogaard of the NHL. Montador had lost almost a year of his career recovering from a severe concussion and died suddenly at 35; Boogaard died of a drug overdose at 28 while recovering from a concussion.

A recent post in The Player's Tribune by retired player Nick Boynton said that fighting during his career has affected his mental health.

Bettman said there were "no shortage of opinions on this subject," adding that fighting deterred players from targeting more skilled stars on the ice. Fighting levels have gone down over decades, he said, as have the number of fight-related concussions.

"You should have none, quite frankly. It is too dangerous," said Liberal MP Doug Eyolfson, who worked as an emergency-room physician for 20 years.

"But you and I don't know the consequences of that," Bettman responded.

The league is also facing a lawsuit, filed Tuesday, from the widow of the late right-winger Todd Ewen, whose brain was found to have CTE after he died at 49 in 2015.

"We believe the lawsuit is without merit as was the main concussion class action and we'll deal with it appropriately."

The NHL reached a settlement last year with hundreds of retired players who claimed harms from head injuries while playing. The league did not admit fault or wrongdoing.