A leader on offence, rookie Cale Makar working to hone his defensive game

Most of the talk about Cale Makar has focused on the Colorado Avalanche rookie defenceman's offensive talent. But in a recent win over Vancouver, the Calgary-born defenceman offered a glimpse of his growing defensive skills.

Most of the talk about Cale Makar has focused on the Colorado Avalanche rookie defenceman's offensive talent.

In Saturday's 5-4 overtime win against the Vancouver Canucks, Makar offered a glimpse of his growing defensive skills.

Colorado was on a second-period power play when the Canucks managed a two-on-one breakaway. with Makar the lone defenceman back. Skating backward he showed patience then used his stick to deflect a pass between the two Canucks forwards to break up the play.

"I trust him on the defensive side of things," said Avalanche coach Jared Bednar. "Some nights are better than others.

"He's a real competitive guy. He plays with a little physicality. He can skate. There is no reason why he can't defend [against] top guys. He thinks the game at a high level. I see him getting stronger and stronger in the defensive zone. He's got a little more grit to his game than he had at the start of the year. It's improving and it's been pretty good for us."

Makar, who turned 21 on Oct. 30, leads all NHL rookies with 23 points (five goals, 18 assists) in 21 games. He had a career-best four assists in the victory against Vancouver, including one on the game-winning goal. The five-foot-11, 187-pound Calgary native is plus-9 on the season and has been averaging 19 minutes and 28 seconds of ice time. 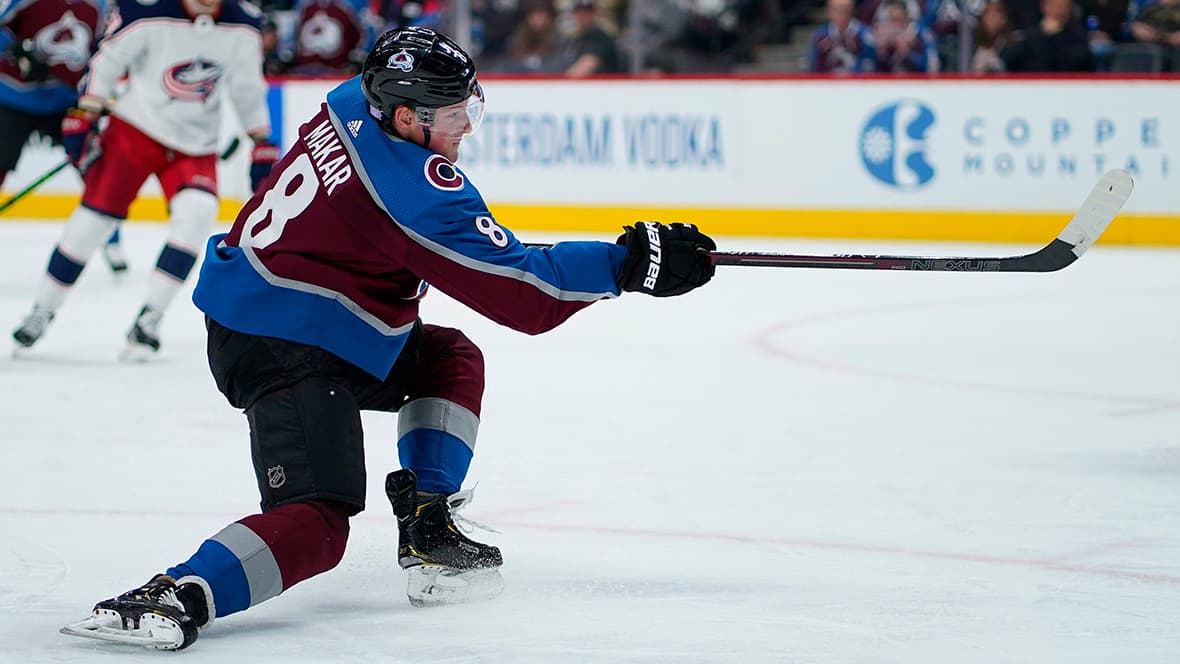 11 months ago
1:22
Colorado Avalanche's Cale Makar is only 21 years old, but he's on pace for one of the best season's ever by a rookie defenceman. 1:22

Makar is the fifth defenceman in NHL history to open his career with points in five games. He's also the first rookie defenceman with 20 points in his team's first 20 regular-season games since Hall of Famer Brian Leetch in 1988-89, according to Sportsnet.

Heading into Thursday night, Makar's 23 points leaves him tied with Dougie Hamilton of Carolina for scoring among defenceman.

While satisfied with his offensive output, Marak is still honing his defensive craft.

"I think it's all a work in progress," he said. "I'm not a guy that is going to be satisfied ever. For an individual like me, I think there's still a long way to go.

"It's nice to have a lot of veteran guys on this team you can rely on for certain tidbits and points."

Veteran defenceman Erik Johnson said Makar will only get better with time.

"There's only so many things you are going to know right away playing defence," said Johnson, who was the first overall pick of the St. Louis Blues in 2006 before being traded to Colorado in 2011. "A lot of it comes through experience.

"Things like sealing out from the corner, stick position in certain situations, you're going to learn with time. The stuff he has you can't teach. The stuff he needs to learn will just come with time, and he is very teachable."

Ryan Graves, the second-year Av who partners with Makar, said the rookie is a great skater who closes quick and is good with his stick

"A lot of defending is being able to contain and break pucks out," Graves said. "He's good at that.

"He has the highlight-reel goals and stuff like that. I think his whole game is progressing and I think he's going to get better in all aspects."

Learning the tendencies of the different players he faces, plus the intricacies of new buildings is part of Makar's learning curve.

"Some of it is done off the pre-game scout and some of it is watching games," Bednar said. "Once you get a chance to play against guys, even period by period, I think there are things you can pick up as a player that will help you defend."

Makar developed in the Calgary minor hockey system. He was playing for the Brooks Bandits of the Alberta Junior Hockey League when Colorado selected him fourth overall in the 2017 draft.

Makar then spent two seasons with the University of Massachusetts. In 75 college games he had 21 goals and 49 assists. In his final year he led UMass to the Frozen Four for the first time. His team lost in the final, but Makar won the Hobey Baker Award as the top men's player in NCAA hockey.

Makar has no regrets over his decision to attend college.

"It was a huge part of who I am right now," he said. "Just being able to go back the second year and find success and make it all the way, it was huge. I'm a big believer in you don't want to rush things. I wanted to be fully ready (for the NHL) and at the end I felt I was really ready."

Makar joined the Colorado during Game 3 of their upset series win against his hometown Calgary Flames in last season's playoffs, and scored his first career goal in the first period. He became the seventh player and first defenceman to score a playoff goal in his NHL debut.

With each game, Makar feels more comfortable on the ice.

"Every day you want to get more confidence in yourself," he said. "It's just going to come with team success. Early on the team was rolling, I don't think I was playing too well. You kind of feed off that.

"We have so many good leaders on this team. There's a lot of guys to rely on, ask when you have questions."