The NHL has acknowledged video review incorrectly nullified a late-game goal by the Colorado Avalanche during a 4-3 loss to the St. Louis Blues.

Incorrectly nullified what would have been tying goal against Blues 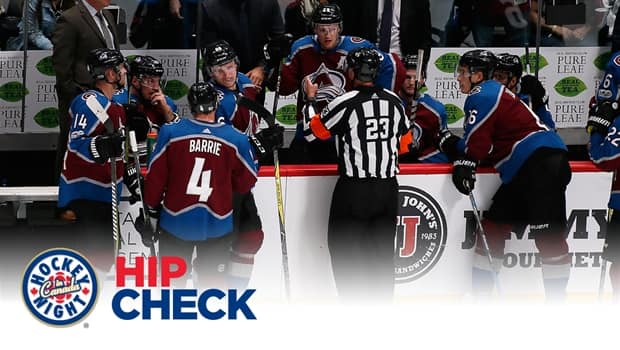 3 years agoVideo
0:52
The league incorrectly took away the Avalanche's game-tying goal against the St. Louis Blues on Thursday, the first mistake of its kind since coach's challenges were added. 0:52

The NHL said Friday that a video review had incorrectly nullified a late-game goal by the Colorado Avalanche during a 4-3 loss to the St. Louis Blues, the first mistake of its kind since coach's challenges were added before the 2015-16 season.

In a statement released Friday, the league said it made a mistake by taking away Mikko Rantanen's goal late in the third period on a coach's challenge for offside. The review determined that Sven Andrighetto was offside, but on a previous entry into the zone, which is not supposed to be subject to a challenge.

The disputed sequence happened in a matter of seconds. Andrighetto was in the offensive zone when he got possession of the puck, which would make him offside, and some of the Blues stopped skating. He re-entered the zone onside and fed the puck to Rantanen for the goal.

The on-ice officials, in consultation with the NHL's situation room in Toronto, incorrectly reviewed the first zone entry, which happened less than two seconds earlier. By rule, challenges can only be made on the entry into the offensive zone before a goal. Because of that, the league says "the goal should have counted."

The NHL did not contemplate restarting the game from that point.

An Avalanche spokesman said the team had no comment. Blues general manager Doug Armstrong, whose father was a linesman, said on Sportsnet's Hockey Central that ultimately the right call was made because the play was offside initially.

"The wording of the rule is wrong, not the call on the ice," Armstrong said. "I don't think anyone that watched the game last night or that know hockey like the back of your hand think that's a goal that we want to count."

St. Louis coach Mike Yeo lost a coach's challenge for goaltender interference earlier in the third period when Colorado's Blake Comeau scored. Under previous rules, he would not have been able to challenge again, but this year the consequences are different: a lost timeout for goalie interference and a penalty for offside, so he was able to ask for review.

Avalanche players were hoping for the best but thought the play was offside.

"We were hoping that the fourth one was going to count but it was clearly offside by a few feet," forward Nathan MacKinnon said. "We didn't know that they could challenge again or (that it could) get overturned or whatever happened."

This is the first time since coach's challenges were instituted that the NHL has conceded a mistake was made on an offside review. There have been 31 total video reviews on offside and coach's challenges so far this season and 351 in 1,230 games last season.

The subject is likely to be discussed when general managers meet next month in Montreal.

"We need to make sure we change the wording in that rule so when it happens again, it is reviewable," Armstrong said.